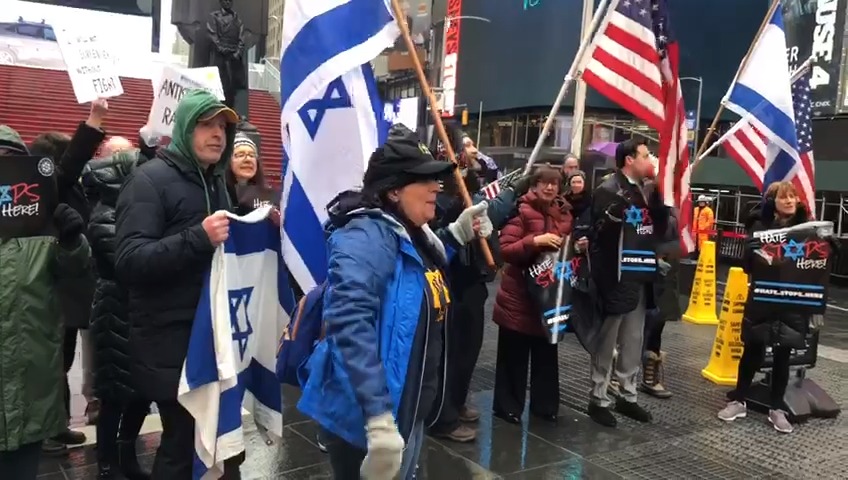 Participants gathered at some 60 rallies held around the world on Sunday decrying the rapidly rising level of anti-Semitism and calling on governments to make it their top priority to combat Jew-hatred.

The main rally took take place in the plaza of the National Institutions in Jerusalem on under the slogan “Stop the hatred.”

Yaacov Haguel, Deputy Chairman of the World Zionist Organization, stated at the event in Jerusalem that “we are here today and in different locations around the world to say enough is enough. We are in a difficult and painful period that has deteriorated rapidly from the scrawling of caricatures and anti-Semitic graffiti, through the destruction of graves to the severe physical harm of Jews in a number of countries. We do not have the ability or the right to continue our lives without response.”

“The last events are no longer merely a warning point, but rather a wake-up call for the rest of the world, Jews and non-Jews,” he warned, calling upon leaders around the world to raise the struggle against anti-Semitism and its elimination to the top of their list of priorities.
In addition to the event in Israel, more than 60 similar rallies were held in Brazil, South Africa, Australia, Romania, Germany, England, France, the US, Hungary, Italy, Georgia, Turkey, Poland, Argentina, Uruguay and Spain, Bolivia and Mexico. In some countries, rallies were held in several locations.

In New York City, about 50 people gathered in Times Square, holding aloft signs condemning the proliferation of racial and religious hatred while chanting “Stop the Hate.” Some attendees wore Jewish Defense League (JDL) shirts; reminiscent of the late 1960s era, when Rabbi Meir Kahane, ztk’l, founded to the Jewish Defense League in New York City for the express purpose of physically fighting back against anti-Semitic attackers.

David Abadie, a former administrative assistant at WZO, organized the rally in Times Square with ads about it on Facebook over the last several days.

Speaking to the Jerusalem Post, Abadie said, “I knew as soon as I heard about the rally in Israel that we had to join in. There had to also be one here in the financial center of the world. For thousands of years anti-Semitism has been going on and we’ve been taking it as bystanders so it’s important we unite together and take a stance. Whether it’s in Congress or elsewhere, it’s time for us to tell the world that hate stops here.” (TPS)