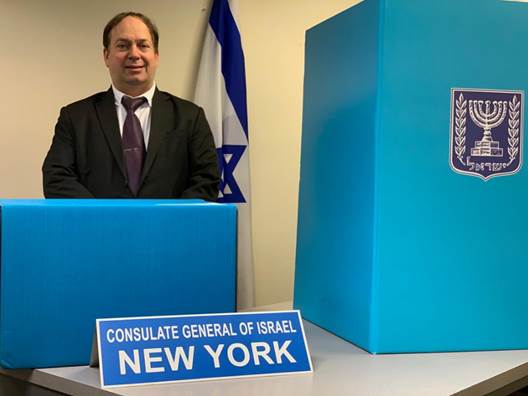 Elections will be held tomorrow, March 28th, for the 21st Knesset at the Israeli Consulate General in New York with a record number of over 700 eligible voters expected locally, the highest number of eligible Israeli voters worldwide outside of Israel. Representing the State of Israel in New York, New Jersey, Pennsylvania, Ohio, and Delaware, the Consulate General of Israel in New York’s Consular Building usually receives at most 400 people on a particularly busy day. The New York Consulate General of Israel is the largest Israeli diplomatic mission in the world and isresponsible for transferring sealed ballot boxes of all of the North and South American diplomatic missions to the Central Elections Committee in Israel. Israeli absentee voters will also be casting their votes at 95 diplomatic and consular missions abroad throughout the day.Interviews will be available upon request.

“Much preparation has been taken to ensure that Israeli elections run smoothly for Israel’s official emissaries who serve abroad. I eagerly call upon all of Israel’s civil servants and their spouses who are currently in New York to exercise their right to vote in their Consul General in New York. Voting is the most powerful tool we have as we continue to strengthen our robust and vibrant democracy in Israel.”

The New York Consulate General has been working for several months to organize Election Day and allow all civil servants who represent the country, along with their spouses, to exercise their democratic right to vote. All hands will be on deck for this important day: all staff members at the Consular Department are involved in assisting with the voting process. Over 6.3 million Israelis are expected to vote in elections taking place in Israel on April 9th.