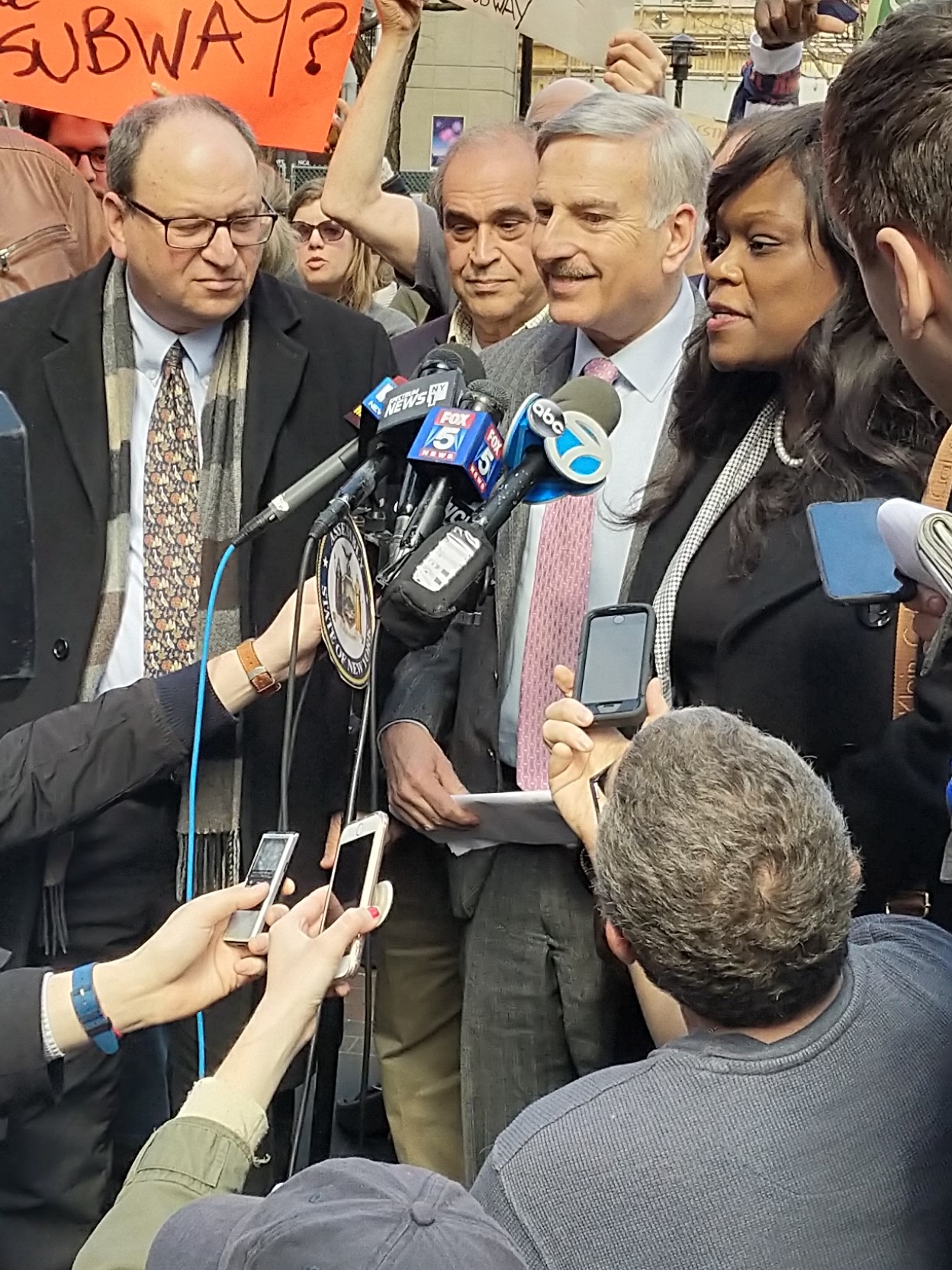 At a press conference at Tramway Plaza at the base of the Queensborough Bridge a group of elected officials including: Assemblymembers David Weprin, Rodneyse Bichotte, and Councilmember Barry S. Grodenchik joined community advocates to oppose the inclusion of congestion pricing in the New York State budget.

As proposed, the plan would burden New York’s middle class families and small businesses who are already struggling with the rising cost of living and a competitive business climate with a new tax.  A recent Quinnipiac poll indicated that financially distressed New Yorkers are considering leaving the City and an additional tax on the middle class and effective tax on all goods brought into or out of New York City, would be catastrophic for outer borough communities.

Furthermore, the congestion pricing plan delegates unilateral authority to an unelected subsidiary of the MTA, the Triborough Bridge and Tunnel Authority (TBTA), which can set the not only the tolls and increases but also the boundaries of the congestion zone as well for the purposes of funding the MTA.

The plan sets no benchmarks for success such as reducing congestion and does not guarantee congestion will be reduced at all. In fact, proponents admit that speeds will only increase by a negligible 1 mile per hour if congestion pricing was implemented.

“New York’s struggling middle class cannot afford another regressive tax in the form of a congestion pricing,” said Assemblyman David I. Weprin. “This debate should not be rushed and we need to look to alternatives that penalize congestion and tax the wealthiest New Yorkers. I look forward to a healthy discussion on alternative solutions that will be fairer to all New Yorkers.”

“We stand with all New Yorkers in addressing the issue of transit funding to help fix our subways and public transportation,” said Assemblywoman Rodneyse Bichotte. “Congestion Pricing in its current form will not guarantee the necessary funds to fix our transit system and will just impose another tax upon on working class New Yorkers. A millionaires tax, however, in conjunction with other sales tax revenues, and a spending cap increase can generate the necessary funding to fix our transit system for all New Yorkers. Let’s continue the dialogue.”

“Many parts of the city lack accessible and efficient transportation options, and the residents of Eastern Queens would be hit hardest by congestion pricing’s financial burden,” said Council Member Barry S. Grodenchik. “We cannot tax our way out of a transit crisis, and writing the MTA a blank check neither addresses the agency’s longstanding underlying challenges nor sets up a sustainable solution.”

“Congestion pricing is a regressive tax on middle and low income New Yorkers that won’t make a dent in congestion,” said former Assemblyman Richard L. Brodsky. “The better course is to tax the billionaire’s and real estate moguls who are left untaxed by congestion pricing and to limit the real cause  of congestion, Uber  and Lyft.”

“TRSA members support New York City’s economy by providing safe hygienically clean linen and uniform maintenance for government agencies, hospitals, restaurants, hotels, and other service industries throughout the city. Congestion pricing will devastate TRSA companies by imposing an unjust tax on drivers picking up and delivering uniforms and linens. TRSA members should not be responsible for repairing the ailing infrastructure of the MTA. This tax will not  reduce congestion in high traffic areas nor will it generate enough funding to fix the MTA’s broken subways,” said Executive Vice President of the Textile Rental Service Association (TRSA) Kevin Schwalb. “Congestion pricing will do nothing but hurt companies who provide a vital service to New York City.  We thank Assemblyman Weprin for his steadfast opposition to this repressive tax and we hope the legislature will consider alternative revenue streams.”

“Trucks are critical to the economic vitality of New York City. Increasing costs to the trucking industry will result in higher costs to businesses,” said Zach Miller Co-Publisher of NewYorkTruckStop.com. “Mass transit is not a viable alternative for trucks since they cannot haul freight on the subways. Their travel is dictated by the delivery time that their customer requests”

“It’s time for our elected officials to lead not follow,” said Arthur Miller, Esq. Co-Publisher of NewYorkTruckStop.com. “Breaking the cycle of borrow, spend, whine, and repeat.”

“Before any congestion fees are levied, we are calling for a comprehensive environmental review on the effects of the additional 85,000 for hire vehicles NYC has allowed on its streets since 2011,” said NYC Taxi Medallion Owner Driver Association Member Carolyn Protz. “This onslaught has led to increases in congestion, crashes, pollution, decreased usage of public transportation and a diminution of driver income causing nine suicides. Let’s get real about this problem!”