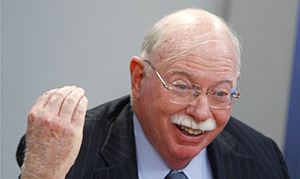 Billionaire philanthropist and Birthright co-founder Michael Steinhardt now stands accused by a number of women for allegedly creating an environment in which he sexually harassed them quite aggressively, even suggesting they should have sexual relations with him. He would also make them generally uncomfortable by talking about their physical appearances, which has all been uncovered by reporting done by ProPublica.

Steinhardt is 78 years old and is no longer employed as a hedge fund manager, but when he was in the heyday of his professional career, he helped manage some of the most well-known Jewish nonprofit groups, Huffington Post reports. It was during these glory days that he allegedly made life hell for the women who worked with him. The report by the New York Times and ProPublica details allegations from about 20 people that span over 20 years. Seven of those women specifically mentioned Steinhardt discussing having sexual relations with them, with one allegation of Steinhardt wanting a “ménage à trois” to occur in a bathtub.

Jezebel reports how the other women who allege the harassment all had stories with overlapping and familiar details, which also matched some of the allegations from two sexual harassment lawsuits that Steinhardt already dealt with in 2012 and 2013.

“He set a horrifying standard of what women who work in the Jewish community were expected to endure,” Rabbi Rachel Sabath Beit-Halachmi said in an interview. She said that when she was about 27 years old, she was working with Steinhardt and was told to put her womb “to work” and he would also tell her to become a “pilegesh.” She said that making matters even more difficult was that Steinhardt had leverage over her because of his sheer power and the fact that he was helping to fund her rabbinical endeavors. She told Jezebel that she didn’t want to interact with Steinhardt for the next 20 years but that things still remained complicated because she didn’t want to jeopardize her career or causes to which were close to her heart.

Steinhardt’s family and foundations just put out a rebuttal to the report about the patriarch’s supposed sexual harassment. Their hand-waving the way he allegedly treated and made women feel in the workplace as him just acting in “jest,” which even if true, does not at all mean that his actions and words weren’t perceived as harassment and hurtful.

The family said that the report “goes out of its way to leave the false impression that Michael propositioned a handful of women,” going on to say that Steinhardt “did no such thing. Nor does the article actually claim that he ever tried to have sex with anyone. But the innuendo and purposeful distortions are clearly designed to harm Michael and mislead readers.”

The statement does acknowledge that “Michael’s sense of humor can be insensitive, and he has apologized for the unintended bad feelings his remarks have caused. As he said months ago: ‘I am sorry and deeply regret causing any embarrassment, discomfort or pain which was never my intention.’”

The statement tried to flip it around by saying “to characterize provocative remarks made in jest and in group settings as actual propositions intentionally distorts the context as well as Michael’s intent — in order to fabricate something that never happened.”

Steinhardt himself said that “I hope my inappropriate banter, which was always meant in a lighthearted way, does not now become twisted into being something it is not.”