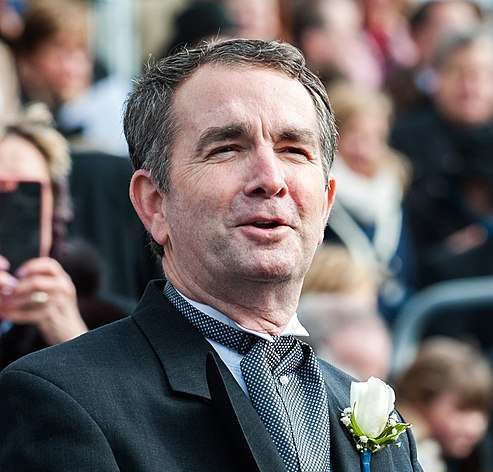 Virginia Gov. Ralph Northam repeated Saturday that he would not resign over a photograph in his medical school yearbook showing a man in blackface standing next to a person dressed as a Ku Klux Klan member.

In comments to reporters, Northam said, “I am neither of the people in that photo.” He said he did not buy a copy of the 1984 yearbook in which the picture appears, and he was unaware until Friday that the picture was even there.

He also said, “It was horrific, and the fact that it was on my page was just unacceptable.”

Northam said he and his staff would continue to work to prove that he wasn’t in the photo.

The governor said he submitted the other three photos on his page in the school yearbook and that he suspected the placing of the racist photo was the result of a mix-up. Responding to a question from a reporter, he said there were multiple episodes of blackface use at the medical school.

He said if he had posed for that picture, “I would have remembered that.” He added, “My belief that I did not wear that costume or attend that party where the offending photo was taken. It stems from my clear memory of other mistakes that I made in that same year of my life.”

Northam admitted that during that year, when he was 25, he appeared in blackface for a dance contest in San Antonio, Texas, in which he impersonated the late pop star Michael Jackson. He expressed remorse for that event, saying he had learned since then why “blackfacing,” as he called it, is offensive. He said upon learning that lesson and discussing it with a younger employee, he vowed never to appear in blackface again.

Northam said Saturday: “Today I am not ready to ask Virginians to grant me forgiveness for my past actions. … I am asking for the opportunity to earn your forgiveness.”

The New York Times reported that since the story broke on Friday, Northam has been making calls to political allies and former classmates in attempts to shore up support and get more information about the photo.

CNN said classmates had told Northam that some yearbook photos were mixed up.

Many of Northam’s former allies said he could not stay in office after Friday’s apology for the photo.

In a video statement Friday, Northam said the photo does not reflect the person he is today. He added that “I cannot change the decisions I made, nor can I undo the harm my behavior caused then and today. But I accept responsibility for my past actions and I am ready to do the hard work of regaining your trust.”

Biden tweeted Northam “has lost all moral authority” and said Lt. Gov. Justin Fairfax, who is African-American, should move into the governor’s office. Pelosi said Northam should “do the right thing” by stepping down and letting Virginians “heal and move forward.”

“Ralph Northam has had three decades to know better but only now does he acknowledge this racist act,” the Congressional Black Caucus posted on Twitter. “An apology now isn’t enough. He must resign.”

The Virginia Legislative Black Caucus posted a statement on Twitter that said of Northam: “We fully appreciate all that he has contributed to our Commonwealth. But given what was revealed today, it is clear that he can no longer effectively serve as Governor. It is time for him to resign, so that Virginia can begin the process of healing.”

“Leaders are called to a higher standard, and the stain of racism should nave no place in the halls of government,” presidential candidate Sen. Kamala Harris, a California Democrat, posted on Twitter in her statement urging Northam to resign. “The Governor of Virginia should step aside so the public can heal and move forward together.”

Another Democratic presidential candidate, Sen. Cory Booker of New Jersey, also took to Twitter, posting, “These images arouse centuries of anger, anguish, and racist violence and they’ve eroded all confidence in Gov. Northam’s ability to lead. We should expect more from our elected officials. He should resign.”(VOA)