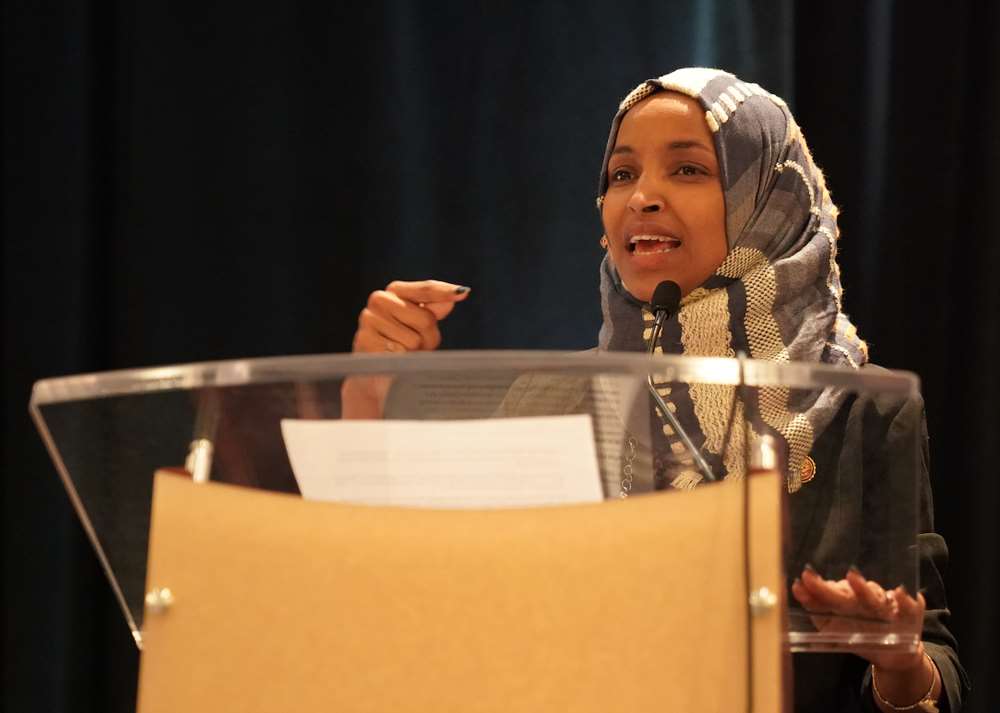 In response to a retweet from Omar attacking the “American Jewish establishment,” fellow lawmaker Lee Zeldin shared a vicious voicemail he received in which Jews were called “bloodsuckers,” “maggots,” and “worse than Hitler.”

In an interview that took place on Tuesday with Zainab Salbi on Yahoo News’ “Through Her Eyes” Rep Ilhan Omar (D-Minn) compared Israel to Iran and added that she “chuckles” when Israel is upheld as a democracy in the Middle East. Omar was particularly perturbed by the passing of the nation-state law which defined Israel as a Jewish state.

Adding fuel to the fire in her mounting anti-Semitism scandal, Omar retweeted on Thursday an anti-Jewish post that rebuked the claim from “the American Jewish establishment” that Israel is a democracy

“The American Jewish establishment claims Israel is a democracy for all its citizens. But the nation state law classifies 1.6 million Palestinian Israelis as second class,” posted the co-founder of anti-Israel organization IfNotNow, Max Berger.

Sharing the post, Omar, a member of the House Foreign Affairs Committee, added, “Many of them truly know this, but don’t want to accept it. In the same way many Americans knew separate yet equal was immoral but remained silent until brave few were silent no more. They can attack, spin my words and vilify me, but they will not succeed in silencing me!”

According to a report in Haaretz, Omar was roundly criticized for a 2012 tweet in which she said Israel has “hypnotized” the world. “Israel has hypnotized the world, may Allah awaken the people and help them see the evil doings of Israel,” the tweet read, which she has recently apologized for.

Omar is one of two members of Congress to openly support the boycott, divestment and sanctions movement.

In response, Rep. Lee Zeldin (R-N.Y.) shared an anti-Semitic voicemail his office received on Thursday, where the caller accused the Jewish congressman of being “worse than Hitler” and calling “everybody anti-Semitic when it comes to you people.”

“This new VM just came into my office. @IlhanMN, this is just another day in my world as an American Jew in Congress,” tweeted Zeldin. “Would love to know what part of this hate filled, anti-Semitic rant you disagree with? I disagree with all of it. Do you?”

Omar called the voice message “heinous and hateful,” and offered Zeldin the opportunity to discuss how to fight religious bigotry over Somali tea.

Zeldin accepted the offer. A time for a meeting between the two has yet to be announced.(JNS)

Stimulus Talks Near Brink of Collapse After Rancorous Meeting