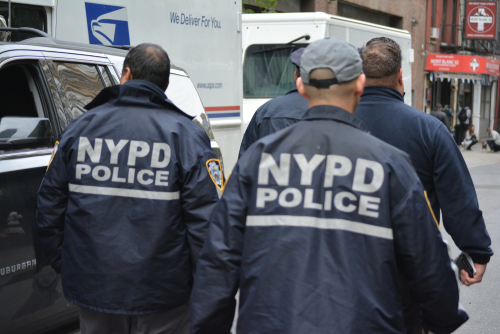 Manhattan District Attorney Cyrus R. Vance, Jr., and New York City Police Commissioner James P. O’Neill today announced the indictment of 12 members of “Chico Gang,” based in and around NYCHA’s Wagner Houses, for engaging in numerous acts of violence in retaliation for the March 2016 fatal shooting of Juwan “Chico” Tavarez and in response to any perceived slights against him after his death. The indictment alleges 17 shootings – with six shooting victims – in and around the Jefferson Houses and other East Harlem neighborhoods over the course of three years.

The defendants are charged in a New York State Supreme Court indictment with 37 counts, including: Conspiracy in the First Degree, a class A-I felony, as well as Conspiracy in the Second, Third, and Fourth Degrees, Attempted Murder in the Second Degree, Attempted Assault and Gang Assault in the First Degrees, and Criminal Possession of a Weapon in the Second Degree, among others.[1] The indictment follows a long-term investigation led by the Manhattan District Attorney’s Office’s Violent Criminal Enterprises Unit and the NYPD’s Manhattan North Gang Unit.

“As alleged in the indictment, these defendants waged a deadly campaign of retaliation, spraying East Harlem with bullets with no regard for the lives of their neighbors or the safety of their community,” said District Attorney Vance. “Areas of East Harlem have violent crime rates twice as high as the rest of the City, driven in no small part by the individuals indicted today. In fact, one-third of all Manhattan shootings last year took place in the 23rd and 25th Precincts. Together with the NYPD, my Office is laser-focused on precisely targeting the drivers of violent crime that still persists in our city, even as crime continues to hit record-lows across the five boroughs. We are equally committed to investing in East Harlem communities through our Criminal Justice Investment Initiative, including by funding service providers, improving access to resources, and helping young people succeed.”

Police Commissioner James P. O’Neill said: “It is our obligation to ensure that New Yorkers in every neighborhood not only are safe, but that they feel safe at all times, too. To that end, our work identifying and dismantling gangs and crews, and preventing the violence so often associated with their activities, continues to be of paramount importance to the NYPD and all our law enforcement partners. I thank and commend the NYPD’s Manhattan North Gang Squad for its dedication to this vital work, and the members of the Manhattan District Attorney’s Office for their efforts helping steer young people in our communities away from criminal behavior.”

According to court documents and statements made on the record in court, the 12 defendants are members of “Chico Gang” based in NYCHA’s Wagner Houses, located in East Harlem between Second Avenue and Harlem River Drive between East 120th and East 124th Streets.

As alleged in the indictment, the defendants sought to kill rival gang members largely in retaliation for the unsolved murder of Juwan “Chico” Tavarez, who was fatally shot inside the Jefferson Houses in March 2016, and in response to any perceived slight against him.

On multiple occasions, the defendants enlisted 14- and 15-year-olds to carry weapons and commit shootings, who were typically accompanied by older gang members. Some of the defendants discussed alleged criminal activity on social media and, on several occasions, defendants also discussed their crimes in calls made from Rikers Correctional Facility.

Among the alleged incidents is a midday shooting on April 11, 2017, in which defendants ASHTON BERRY, a/k/a “Ash Gunz,” LAMAR WARE, and JASON WILLIAMS approached the Jefferson Houses in possession of a .25 caliber semi-automatic pistol. As alleged, WILLIAMS fired into a crowd of people with children playing nearby, and struck a 22-year-old man in the leg.

Overall, from approximately November 26, 2015, through January 25, 2019, the defendants are charged with committing approximately 17 shootings with six shooting victims, as well as multiple weapons-related crimes.

The Manhattan DA’s Office is committed not only to prosecuting those responsible for gang violence, but preventing young people from getting involved in gang violence in the first place. Moreover, the Office recognizes the impact these prosecutions have on the family, friends, and neighbors of those charged.

Following today’s indictment, in the coming days, the DA’s Office’s Community Partnerships and Crime Strategies Units will meet with community-based service providers in East Harlem to continue to enhance the Office’s partnerships with these organizations, connect with more young people in the area, and assess additional resource needs for young people who live in Wagner and Jefferson Houses and the surrounding neighborhood. We will also host the second-annual “Art of Healing” festival this summer to encourage residents and community members to use creative arts as a resource to heal trauma resulting from gun violence.

[1] The charges contained in the indictment are merely allegations, and the defendants are presumed innocent unless and until proven guilty. All factual recitations are derived from documents filed in court, including the indictments, and statements made on the record in court.