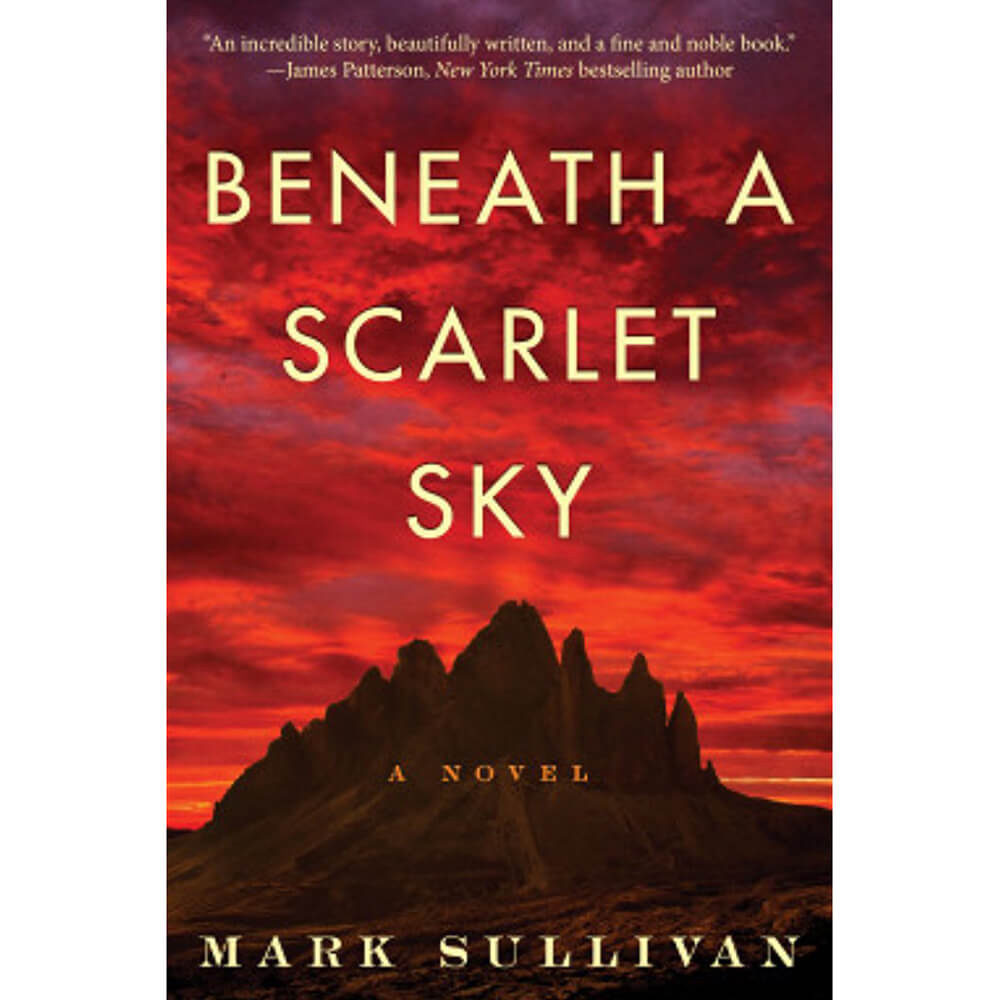 They are stories that need to be told. As the Holocaust recedes ever further into history, it’s more imperative than ever to record history, ensuring we have the testimonies of those who witnessed the horrors of the Holocaust firsthand.

Recent years have seen a number of bestselling books about the Holocaust. One of the most celebrated recently is Beneath a Scarlet Sky by Mark Sullivan, which is currently in production to be a major television movie starring Spider-Man hero Tom Holland. The book has been a runaway bestseller, reaching the top of Amazon Charts, and has been translated into ten languages. The story it tells is of a remarkable Italian hero who helped Jews escape the Holocaust. While fiction, it has some true components, and mirrors the real-life heroism of hundreds of Italians who risked their lives to help Jews.

Mark Sullivan first heard of the man on whom his fictional hero is based in 2006. Somebody mentioned a 79 year old man in Italy who said he’d helped rescue Jews. Fascinated, Sullivan placed a call to the man, Pino Lella, in Milan. “I understand you’re an unsung hero,” Sullivan said.

Sullivan flew to Italy to interview Lella and the pair collaborated on the resulting book for ten years. At first Sullivan wanted to write about Lella’s exploits in a work of nonfiction, but he was unable to: few or no witnesses remained who could attest to Lella’s actions, and he found few official records of Lella’s accounts. Instead, he wrote a fictional book that draws on many of the stories Lella told him. Sullivan has estimated that “90%” of the adventures in his book are true.

The fictional Lella in his novel works for the Italian resistance and helps lead dozens of Jews to safety in Switzerland over the Alps. The fictional Lella joins the German army and becomes driver to a high-ranking Nazi official – all the while acting as a spy for the partisans. In the book, Lella works to hide Jewish refugees, including a young sick girl whom he rescues from a cattle car taking Jews to a death camp. The novel records adventurous tales of derring-do.

Incredibly, real life events were often just as dramatic, as real-life Italian heroes worked to save Jews. About 80% of Italy’s Jewish population survived the Holocaust, in part due to efforts of Italian partisans and sympathizers who risked their lives to help and shelter Jews. Here are three real-life, incredible examples of Italian heroes who helped save Jews from the Holocaust and whose actions rival any fictional account.

He was Italy’s greatest athlete: a two time winner of the Giro d’Italia, Italy’s greatest cycling race, who’d also won the Tour de France in 1938. Yet when Gino Bartali, an Italian Catholic from the region of Tuscany, returned home from the Tour de France as Italy’s greatest hero, he pointedly refused to dedicate his victory to Italy’s Fascist leader, Benito Mussolini. Mussolini had recently stripped Jews in Italy of their citizenship and forbade them from working in the government and in many other professions. Bartali disagreed with Mussolini’s racism, and courted reprisals by snubbing Il Duce as the wartime leader was known. He was denied racing opportunities, and considered persona non grata for his anti-Fascist stance.

In 1943, Nazi Germany occupied the northern and central regions of Italy and began rounding up Italian Jews and sending them to concentration camps, Archbishop Elia Dalla Costa, the Cardinal of Florence, sent word to Batali with a top-secret message. The Archbishop was part of a clandestine network of people offering safe passage and protection to Italy’s Jews. Did Batali want to join them, risking death and torture to help Jews? Batali didn’t hesitate; he joined the network and started working to safeguard as many Jews as possible.

Batali’s fame as a cyclist gave him the perfect cover. He quickly had a special bicycle made that was fitted out with hollow areas in the frame and handlebars in which he could stow secret documents. Batali started cycling this special bike all over the country delivering top secret documents. When questioned, Batali explained that he was merely training. In reality, he carried forged identity papers made in the network’s secret printing presses, giving Jews new identities that helped them escape Italy. The job was incredibly risky: Batali was arrested in Florence and questioned by the head of the Fascist secret police. At one point he lived in hiding in the town of Citta Di Castello in Umbria while German forces searched for him to question him about his suspicious cross-country rides.

In addition to his courier services, Batali also courted danger by hiding his Jewish friend Giacomo Goldenberg, and Goldenberg’s family, in an apartment Batali owned in Florence. “He hid us in spite of knowing that the Germans were killing everybody who was hiding Jews” Giorgio Goldenberg, Giacomo’s son, later recalled: “He was risking not only his life but also his family. Gino Bartali saved my life and the life of my family. That’s clear because if he hadn’t hidden us, we had nowhere to go.”

Bartali never spoke of his wartime heroism; his remarkable story only became known after his death in 2000. He was recognized as Righteous Among the Nations by Yad Vashem in 2013.

Distinguished physician and professor, Dr. Giovanni Borromeo was the director of the renowned Fatebenefratelli Hospital in Rome when World War II broke out. He was a devout Catholic and father of young children who’d been a military hero during World War I. Although he had everything to lose by helping Jews, when an employee of the hospital, Dr. Vittorio Emanuele, came to tell him he was working under a false name and was secretly a Jew, Dr. Borromeo assured the frightened Jewish doctor that his secret was safe.

Fatebenefratelli Hospital was across the street of Rome’s Jewish Ghetto, in which Nazi forces forced the city’s Jews to live after they invaded Italy in September 1943. Secretly, Drs. Borromeo and Sacerdoti began transferring Jews into the hospital – especially after October 16, 1943, when Nazis began mass arrests of Jews. In all, about two dozen Jews were ushered into the hospital, ad Dr. Borromeo had a perfect explanation: they were suffering from a mysterious, and highly contagious, new epidemic: “K Disease”.

K Disease was accompanied by horrible coughing fits, which seemed to intensify whenever Nazis entered the hospital looking for Jews. Terrified of becoming infected, the Nazis would retreat, leaving patients suffering from K Disease alone. Some Germans wondered if the dreaded sickness Dr. Borromeo spoke of might be Koch or Kreps disease, which are real ailments. In reality, Dr. Borromeo’s “K Disease” stood for the dreaded General Albert Kesserling, who fought Italian troops in North Africa and oversaw massacres of Allied troops in Italy.

Whole families found refuge in the hospital, including the Jewish Tedesco family, who later told the world about Dr. Borromeo’s bravery and kindness. Claudio and Luciana Tedesco, their parents and their grandmother all found refuge within the hospital walls. In May 1944, German forces raided the hospital. The Tedescos recalled how doctors instructed them to cough loudly whenever Germans were near. Tragically, the Nazis arrested six Polish Jews who were hiding on a hospital balcony, but the rest of the Jewish “patients” were left untouched.

In 2004, Yad Vashem recognized Dr. Giovanni Borromeo as Righteous Among the Nations for his role in saving dozens of Jews.

Maria Agnese Tribbioli was the Mother Superior at the Firenze Convent on Ferragli Street in Florence when war broke out. Together with a loose network of other Catholic leaders, especially her friend Cardinal Elia Della Costa, Mother Maria decided to take action when Jews and other Italians began to be deported. She decided to use her convent to shelter Jews and political dissidents, and to liaise with other Catholic officials to plan and implement a network of safe houses across Italy.

Mother Maria Agnese knew her activities could have deadly consequences if Nazis ever realized her convent was sheltering Jews. She never told the other nuns the identities of their guests, only calling them “homeless refugees” and explaining that they needed hospitality and aid. Several Jewish families hid in the convent. The convent had a kindergarten which some of the Jewish children attended.

Years later Cesare-David Sacerdoti, an Orthodox Jew who hid in the convent with his brother and mother (his father hid elsewhere in the city) testified to the Mother Superior’s bravery and kindness. He remembered her stroking his head during kindergarten, looking kindly at him but saying nothing. When nuns complained to Mother Maria Agnese that Cesare-David refused to cross himself, she simply told them to leave him alone and explained that the trauma of leaving home to attend school in the convent was to blame.

Cesare-David’s father was able to visit the convent a number of times to receive news about his wife and sons. At least once, Nazis tried to break into the convent to search for Jews, but Mother Maria Agnese was able to convince them to leave, explaining that searching her convent would violate its holy sanctity.

On November 27, 1943, Nazis forces did force their way into a nearby convent, where they discovered many Jewish women hiding with their children. Mother Maria Agnese worried that her convent would be raided next. She ordered all her nuns to remain locked in their rooms, then coordinated with other Catholic officials to find new safe houses for the Jews she’d sheltered.

In 2009, Yad Vashem recognized Maria Agnese Tribbioli as Righteous Among the Nations.

Pino Lello concludes Beneath a Scarlet Sky by musing that he’s proud of his wartime activities helping Jews and declaring “we must have faith in God…and in a better tomorrow”. The bestselling novel depicts extraordinary bravery and offers a realistic-seeming account of Italians’ bravery. Thanks to the real-life activities of these and hundreds of other Italian heroes, thousands of Italian Jews survived the Holocaust. Their inspiring histories should never be forgotten. (Aish.com)

Yvette Alt Miller earned her B.A. at Harvard University. She completed a Postgraduate Diploma in Jewish Studies at Oxford University, and has a Ph.D. In International Relations from the London School of Economics. She lives with her family in Chicago, and has lectured internationally on Jewish topics. Her book Angels at the table: a Practical Guide to Celebrating Shabbat takes readers through the rituals of Shabbat and more, explaining the full beautiful spectrum of Jewish traditions with warmth and humor. It has been praised as “life-changing”, a modern classic, and used in classes and discussion groups around the world.

Talmud on the Mind: Exploring Chazal & Practical Psychology to Lead a Better Life