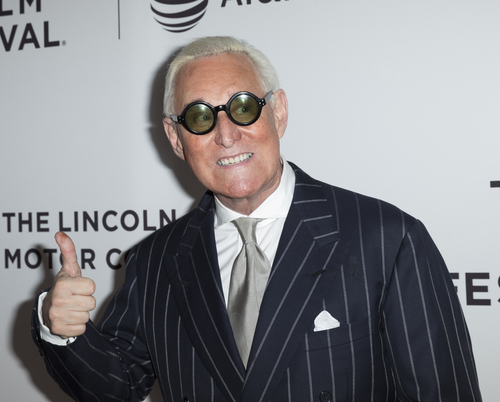 Longtime politico and the youngest person involved in the fallout from the Nixon scandal Roger Stone has been indicted by the office of special counsel appointed by Deputy Attorney General Rod Rosenstein to examine potential ties between Russian intelligence and Trump campaign members. Stone, a self-described “dirty trickster” who idolizes Nixon, may be living out a fantasy of sorts as he stares down seven counts coming from a special counsel that’s already secured multiple guilty pleas and verdicts.

He faces charges that include witness tampering and making false statements. He allegedly used an intermediary to facilitate the transfer of stolen emails from WikiLeaks that would be damaging to Democrats in 2016, and during Congressional testimony, he said the intermediary was radio host Randy Credico. The special counsel alleges that Stone actually went through conspiracy theorist Jerome Corsi.

“There is no circumstance whatsoever under which I will bear false witness against the president, nor will I make up lies to ease the pressure on myself,” Stone said.

“I look forward to being fully and completely vindicated,” he said, while adding that he wouldn’t lie about the president to investigators. He was released on a $250,000 bond.

In addition to a brief media press conference where here was assailed by reporters screaming about Russia, he appeared on controversial talk show host Alex Jones’ radio show

Once Republicans fill the minority vacancies on the House intelligence committee, the committee will submit all relevant transcripts from other campaign officials and associates who testified to Congress, according to the chairman of that committee, Rep. Adam Schiff (D-Calif.). Mueller’s team also appears to have looked at testimony given by some of these people to the Senate regarding Russia. If yesterday’s indictment is any indication of what’s to come, more false statement charges could be coming for other associates. Former Donald J. Trump fixer Michael Cohen already was charged with lying to Congress and pleaded guilty.

CNN was the first to report on the news because it was actually at the FBI raid when it happened. Former Fox News personality Greta van Susteren openly speculated on social media that the F.B.I. must have tipped off CNN in order to embarrass the president.

CNN refutes those claims by saying that reporters knew the raid was coming because of “dogged journalism” that included closely watching court filings and other Mueller activity and then piecing that information together.

Regardless of what CNN claims, it was an orchestrated Hollywood style event designed to make our president look awful.

CNN had recently been caught publicly   humiliating  a High School student over his MAGA hat and smile he made after being assailed by a professional Native  American activist, in an encounter the media carefully designed to demonize Trump supporters. The CNN narrative told a story of a racist young man mocking an innocent Native American. The entire video of the incident showed that the student and group of friends were verbally harassed by the radical “Black Israelite”  cult  who were actually hurling racist and homophobic slurs towards the Catholic school boys and the Native Americans. The magic of CNN’s “dogged journalism” created a false narrative which swept the radical left into a frenzy on social media, calling for the kids to be in some cases on Twitter, to be  murdered and their entire school mascaraed.

One must wonder of the media hyped FBI raid on Stone’s property was designed to help the public forget what they had done to those students.

The president didn’t have much to say but did tweet that the investigation is the “Greatest Witch Hunt in the History of our Country!”

During a flurry of tweets Saturday morning, the president wondered why his opponents haven’t been indicted for lying to Congress. He did not make any specific claims as to which lies he was talking about or what evidence could prove those lies.