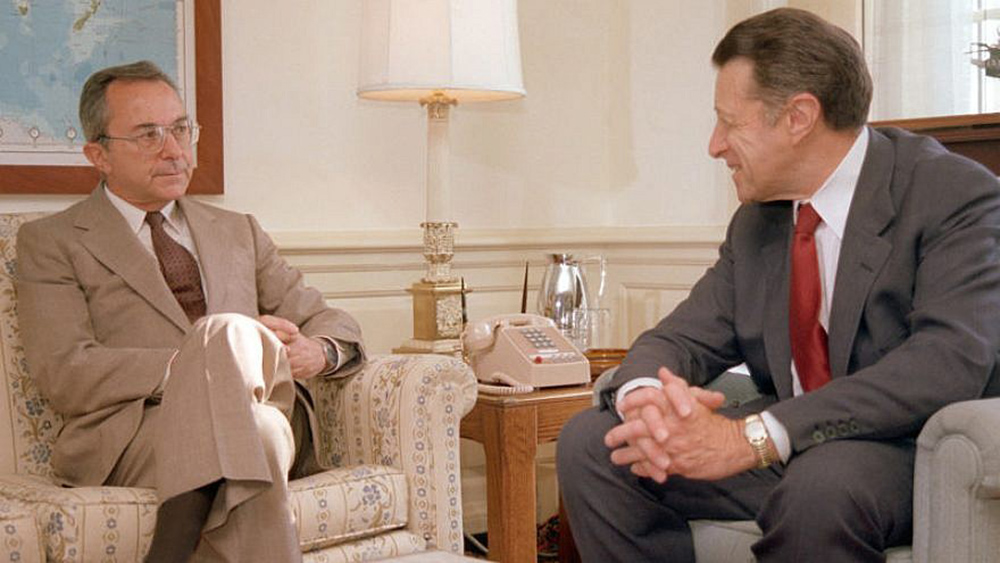 “As ambassador, he worked to strengthen the ties between the U.S. and Israel, and was a visionary about the need for Israel to utilize modern technologies and methods to get its message across. His clarity of thought and well-reasoned arguments never failed to impress even Israel’s opponents.”

Reactions and memories from the Jewish and pro-Israel community have filled news pages and social media following the death of Moshe Arens, former Israeli Defense Minister and mentor of Israeli Prime Minister Benjamin Netanyahu, on Monday at the age of 93.

“The Conference of Presidents mourns the loss of a great leader of Israel and dear friend of the Presidents Conference, Minister Moshe Arens. Minister Arens served Israel in many capacities, including as a very impactful and successful Ambassador to the United States, Foreign Minister and Minister of Defense,” said the organization’s chairman, Arthur Stark, and executive vice chairman and CEO Malcolm Hoenlein.

“Beyond his many accomplishments in these positions, Minister Arens was known for his integrity, thoughtfulness and deep devotion to the Jewish state and Jewish people,” they continued. “Minister Arens continued to appear at Conference events in Israel, including our annual mission last year.”

“As ambassador, he worked to strengthen the ties between the U.S. and Israel, and was a visionary about the need for Israel to utilize modern technologies and methods to get its message across,” they added. “His clarity of thought and well-reasoned arguments never failed to impress even Israel’s opponents.”

“AIPAC mourns the passing of Moshe Arens,” tweeted the organization. “A strong champion of the U.S.-Israel relationship, he served as Israel’s Ambassador to the U.S., Minister of Foreign Affairs, and Minister of Defense.”

“Moshe Arens, an English-speaking US-educated aeronautical engineer who rose to become Israel’s three-time defense minister & mentored a young Benjamin Netanyahu at the start of his career, died on Monday at age 93,” tweeted StandWithUs. “May his memory be a blessing.”

J Street president Jeremy Ben-Ami expressed his condolences over “a great man who dedicated his life to the service of Israel and the Israeli people.”

“I have long had a personal, familial connection to Arens through my late father, Yitshaq Ben-Ami, who was like a mentor to him in the Betar Youth Movement and the Irgun,” he said. “I remember well that when I first moved to Israel in the 1990s, ‘Misha’—as we knew him—was among the first people I met with, given our long family history.”

“When it came to questions of politics, diplomacy and the Israeli-Palestinian conflict, Arens and I disagreed about most everything,” he continued. “Yet like so many of those who disagreed with him politically, I always found him to be, on a personal level, impeccably courteous and kind.”

Sarah Stern, founder and president of the Endowment for Middle East Truth (EMET), told JNS: “Moshe Arens was a remarkable individual, a rare breed of politician who was cut out of a cloth of a different generation. He was someone who had placed pure ideology, pure principle, idealism and the good of the nation above any sort of personal consideration.”

“He was one of the greats, in a small class, together with David Ben-Gurion, Ze’ev Jabotinsky, Yitzhak Shamir and Uzi Landau,” she added.

“Moshe Arens was a patriot, a warrior and a Zionist who believed in the State of Israel as the homeland of the Jewish people while offering Israel’s religious and ethnic minorities a full seat at the civic table,” Jewish Policy Center senior director Shoshana Bryen told JNS. “Israel has lost a man of remarkable talent, modesty and unfailing courtesy, who served in whatever capacity asked of him. It was a privilege to have known him.”