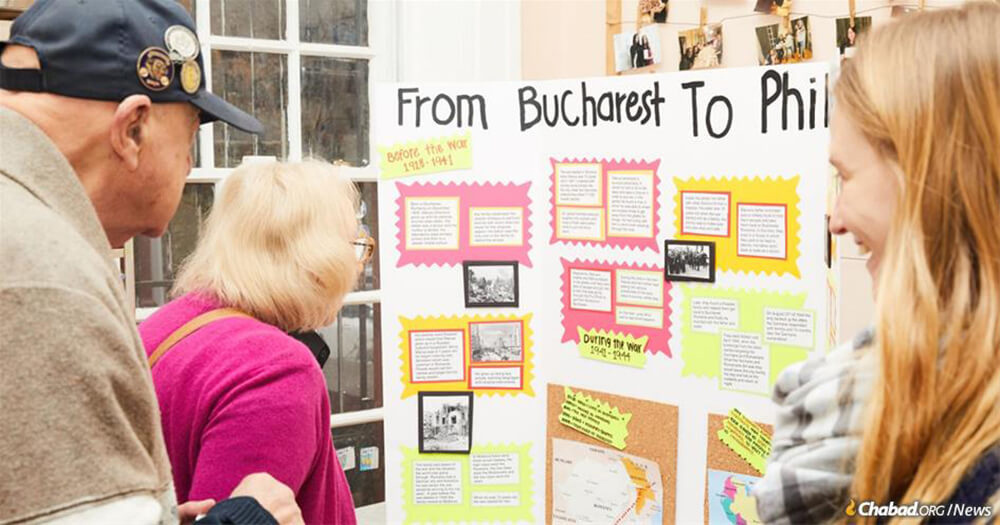 As the result of a unique fellowship that connects Holocaust survivors with college students, Marius Gherovici, 91, recently celebrated his bar mitzvah in Philadelphia by putting on tefillin for the first time, and then singing and dancing with a group of young new friends.

Gherovici expressed gratitude to G d for his survival despite, he said, not being a practicing Jew. “It is my first time entering the religion,” he stated while proudly wearing tefillin. “We weren’t religious; we were fighting for our dear lives, but Somebody upstairs gave me a hand not once, but a hundred different times.”

Gherovici was visiting Chabad at Drexel University as a participant in the “Stories That Live Fellowship”, where students help survivors share and document their experiences during World War II. The ceremony was led by Rabbi Chaim Goldstein, co-director with his wife, Moussia, of Chabad Serving Drexel University

Created by Rabbi Eli Gurevitz, co-director with his wife, Blumie, of the Rohr Center for Jewish Life-Chabad Serving Haverford, Swarthmore and Bryn Mawr, the fellowship creates the opportunity for survivors to share their stories with the students who document them through various creative retelling projects. The projects are then featured in an exhibit that organizers hope to preserve for generations to come, as well as uploaded to the fellowship’s website. With approximately 50 fellows in 2018, the project has 40 digital exhibitions and has reached thousands of college students.

Gherovici’s story was documented by student Aliza Rozen through a collection of photographs from his childhood, coupled with photographs of his children and grandchildren. Born in 1927 in Bucharest, Romania, he survived the pogrom of June 24, 1941, when Romanian collaborators backed by German SS units murdered thousands of people. He spent the war living in a ghetto, working in the makeshift hospital with his father, and was separated from part of his family for the duration of the war. In 1948, he moved to Argentina. There he married and had two children. In 1999, he moved to Philadelphia.

“It was an honor for our students and me to be a part of this amazing event,” said Rabbi Chaim Goldstein. “Marius was deprived of a proper bar mitzvah due to the horrors of the Nazis, which is what made his bar mitzvah so particularly moving.”

“‘The Stories That Live Fellowship’ provides students with a one-of-a-kind opportunity to document the unique memories and experiences of Holocaust survivors for future generations,” said Gurevitz, director of the program. “In the few short years since we started it, a number of the survivors who participated have passed away, highlighting the urgent need for the program. If you know a local survivor who would like to inspire the next generation, please get in touch.”