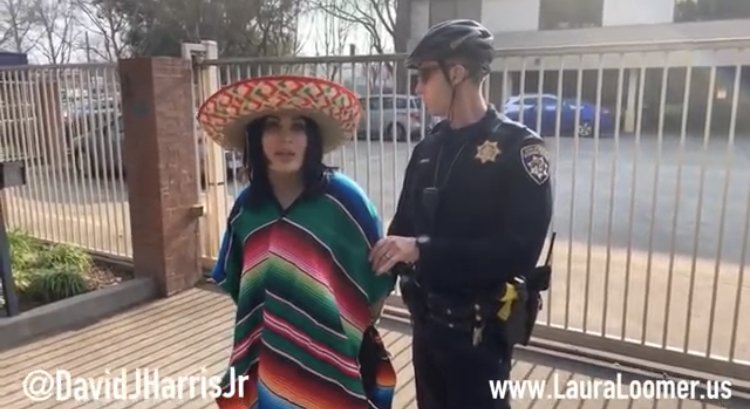 According to a report on the Gateway Pundit web site, Conservative activist Laura Loomer and one other person were arrested on Wednesday outside of California Governor Gavin Newsom’s mansion after she and another demonstrator jumped the wall of the official state residence of the state’s highest elected official.

Addressing the immigration issue and border security which has dominated the headlines, Loomer criticized Newsom in a live stream video prior to her arrest by California police.

In a comment laced with sarcasm, Loomer said,  “Gavin Newsom, the Governor of California said everybody is welcome here and now the police and the armed guards are telling us that we are trespassing, but I thought that California was an open borders state.”

According to the Gateway Pundit report Loomer added, “Gavin has a fence — they have officers here. They are telling us we’re trespassing…I’m so confused!”

After the police handcuffed Loomer she said, “It’s interesting how as an American you’re not allowed to hop over Gavin Newsom’s fence or Nancy Pelosi’s fence — you get handcuffed and arrested, but if you’re an illegal alien or you’re a rapist or you kill innocent police officers or you murder and rape women here, you’re an illegal here in California you get all the free benefits, you have free welfare — free housing — free everything and you don’t get deported, right?”

Earlier this month Loomer jumped the fence around Speaker of the House Nancy Pelosi’s California home and set up a tent to protest her opposition to building a wall for purposes of border security on the US-Mexico border.

In November, Loomer was banned from Twitter after voicing her criticism of Rep Ilhan Omar of Minnesota, a Muslim and the first Somali-American elected to Congress. Loomer’s tweet said that “Ilhan is anti-Jewish,” according to The Daily Beast.

Loomer subsequently staged a protest by handcuffing herself to Twitter headquarters in Manhattan, saying that her first amendment rights of free speech has been denied to her.

“I am not going to stand by as people like Jack Dorsey and Mark Zuckerberg [try to] silence the voices of millions of conservatives,” she said while handcuffed to the building, according to NBC News.

Loomer and other right-wing figures have claimed that social media platforms have an anti-conservative bias. Other prominent right-wing personalities, including Infowars conspiracy theorist Alex Jones, have recently been removed from Twitter.