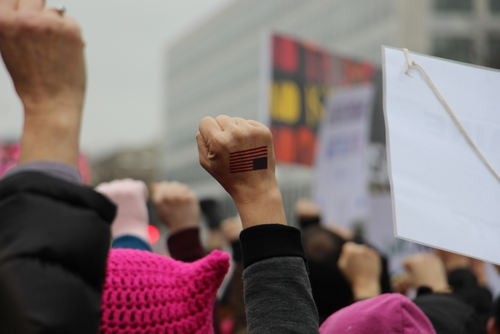 The feisty conservative activist and staunch Israel supporter Laura Loomer stormed the stage at the controversial “Woman’s March” in NYC on Saturday afternoon. She got on stage and said “woman’s march hates the Jews”.

Recently the “Woman’s March” has been splintered over the anti- Semitic statements made by movement leaders   Tamika Mallory and Carmen Perez, who we recently learned  told the group’s founders before its first march that “Jewish people bore a special collective responsibility as exploiters of black and brown people” and Mallory also told the march founders that  ” the problem was that there were five white women in the room and only three women of color, and that she didn’t trust white women. Especially white women from the South.” Infamous anti Israel Palestinian activist Linda Sarsour has also been one of the faces of the movement since it’s inception in 2017

Loomer is known for her creative protests  such as storming the stage of a Central Park production of “Julius Caeser” (where an actor dressed as Trump was stabbed to death), confronting left wing celebrities such as Alyssa Milano,  protesting in front of  Twitter offices over conservative censorship  and just recently coming to Nancy Pelosi’s home with illegal Mexicans set to camp out on her lawn, in a brilliant stunt regarding immigration.

Below is footage of Loomer’s latest protest