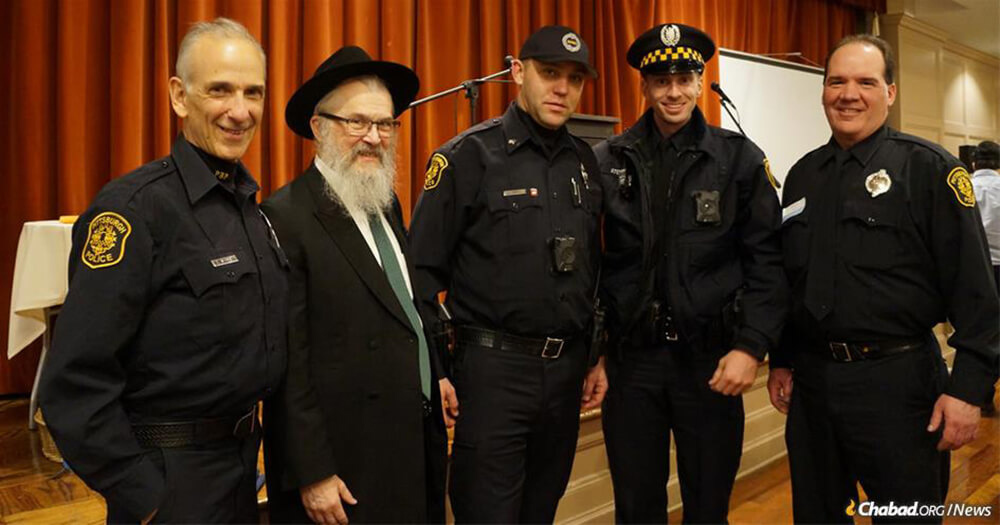 The police officer who took a bullet for the Jewish people while responding to the Oct. 27 shooting during Shabbat-morning services in Pittsburgh, and was promised a hero’s welcome by Chabad of Pittsburgh for his life-saving bravery, got that welcome at a gala event co-hosted by Yeshiva Schools and Lubavitch Center of Pittsburgh on Jan. 12. At a lavish melaveh malkah—the traditional post-Shabbat meal—the Pittsburgh Jewish community came together to honor his actions and those of four other Pittsburgh officers also injured in the attack.

“Each year, Lubavitch Center and Yeshiva Schools unite for this event honoring a community member,” said Rabbi Henoch Rosenfeld, director of Chabad Young Professionals in Pittsburgh. “This year, the community was overwhelmingly in favor of honoring the first responders whose quick action saved lives.”

Rosenfeld related the story of a Chassid who wished to see Elijah the Prophet. Upon inquiring of the Baal Shem Tov how this could be done, the Baal Shem Tov instructed him to bring sorely needed food and clothing to a poverty-stricken family. He did not meet Elijah, but to that family, he was Elijah.

“Often, when we’re looking for our miracle, we don’t have to look far,” said Rosenfeld. “Officers Dan Meade, Michael Smidga, Tyler Pashel and the others, through their selfless actions, by putting themselves in the clutches of death became our miracle.”

Police Chief Daniel Hermann confirmed what was previously speculated—that the gunman was on his way to a second site to continue his deadly rampage, his car engine still running outside the building, when Mead and Smidga, the first officers on the scene, exchanged gunfire with him and forced him back inside, where he was eventually arrested. Hermann also acknowledged the “overwhelming outpouring from the Jewish community saying, ‘Thank you for what you do.’ ”

Also honored at the event was Yeshiva Schools’ security manager Chaya Engel, whose leadership continues to ensure the students’ safety. “I was glad to have the opportunity to educate parents about the safety measures we are taking, and to express my gratitude to everyone who has stepped in and shown their support for heightened security measures,” said Engel. “After I initiated the push for increased security, so many from the community, the government and local law enforcement have been incredibly helpful in the implementation of these efforts.”

Mead faces a long road of recovery after sustaining a gunshot wound to the arm. Smidga’s return to work was celebrated several days before the event, and Pashel is back as well, putting their lives on the line to protect others.

Rosenfeld notes that in the weeks and months since the shooting, the community has been exceptionally united, coming together to support the injured and the local synagogues. “It’s amazing how the synagogues came together,” he said. “This was a tremendous opportunity for us to show our gratitude to the officers who took bullets for us—bullets that were intended for the Jewish community.”

Rabbi Yisroel Rosenfeld, director of Chabad Lubavitch of Pittsburgh, said that “as one of the largest synagogues in Squirrel Hill, we felt it was our duty to express our appreciation to the officers of the Pittsburgh Police Department for their selfless and heroic actions.”