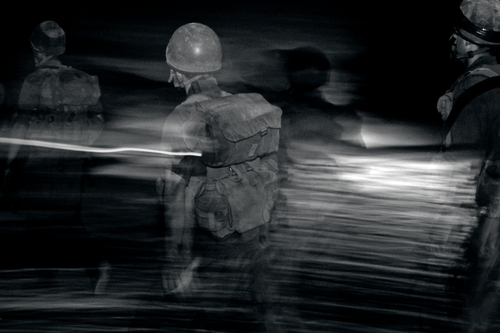 In a special press conference held on Saturday, the Hamas terror organization released new details in regards to the IDF special forces operation in Gaza back in November that went awry.

Local media organizations in Gaza reported that members of the Ezzedine  al-Qassam Brigades military wing (a branch of Hamas) told reporters that on  November 11, Israeli special forces entered Gaza in a blue Volkswagen car through one of the official border crossings. It was either through Israel’s Erez Crossing or Egypt’s Rafah Crossing, and the group provided identity documents, claiming to represent a local charity. They had even rented a safe house,

Three kilometers into Gazan territory in Khan Yunis, a local commander named Nour Baraka spotted the car. The car was then stopped at an Hamas checkpoint for questioning. The Israelis claimed that they were NGO workers and part of a medical team ferrying patients in the area and that they had a wheelchair in the back of the car.

Abu Obeida, a spokesman for the Ezzedine al-Qassam Brigades said that the 15 members of the elite Israeli military unit had infiltrated Gaza and travelled in the enclave using cars disguised as vehicles belonging to the local charity which they claimed to represent.

Their goal was “establishing a spy system to eavesdrop on the communications network of the resistance in the Gaza Strip”, Abu Obeida said, showing video footage of what he said was the soldiers in action.

The intelligence-gathering mission, turned deadly when the undercover soldiers were spotted near Khan Yunis in the southern Gaza Strip.

Hamas forces fired the first salvo in a firefight that claimed the lives of an Israeli general and seven Palestinians, including a local Hamas military commander, as was reported by Al Jazeera. According to the Hamas source, the terror group purportedly tried to arrest the Israeli soldiers before the confrontation ensured in which the Israeli commander was killed.

The episode sparked a massive two-day bombardment in which nearly 500 rockets were fired by Gaza militants into Israel in the most severe flare-up in violence between Gaza and Israel since a 2014 war between the sides.

A November 13th ceasefire brokered by Egypt ended the fighting.

AFP reported that Hamas also managed to capture equipment used by the group, Abu Obeida added, promising a million dollars to any local “collaborator” who would supply Hamas with information about the operation.

Al Jazeera reported that Hamas had already published photos of eight people and two vehicles it said were linked to the operation, prompting the Israeli army censor to appeal to the public and media not to republish the images.

The military wing of Hamas claimed that Israel had prepared for the operation for ten months, assembling a force of 15 fighters from the IDF’s commando unit that entered the strip covertly at a time of heavy fog.

The incident prompted Hamas to vow revenge and sparked the deadliest flare-up between the two sides since Israel’s military assault on Gaza in 2014.