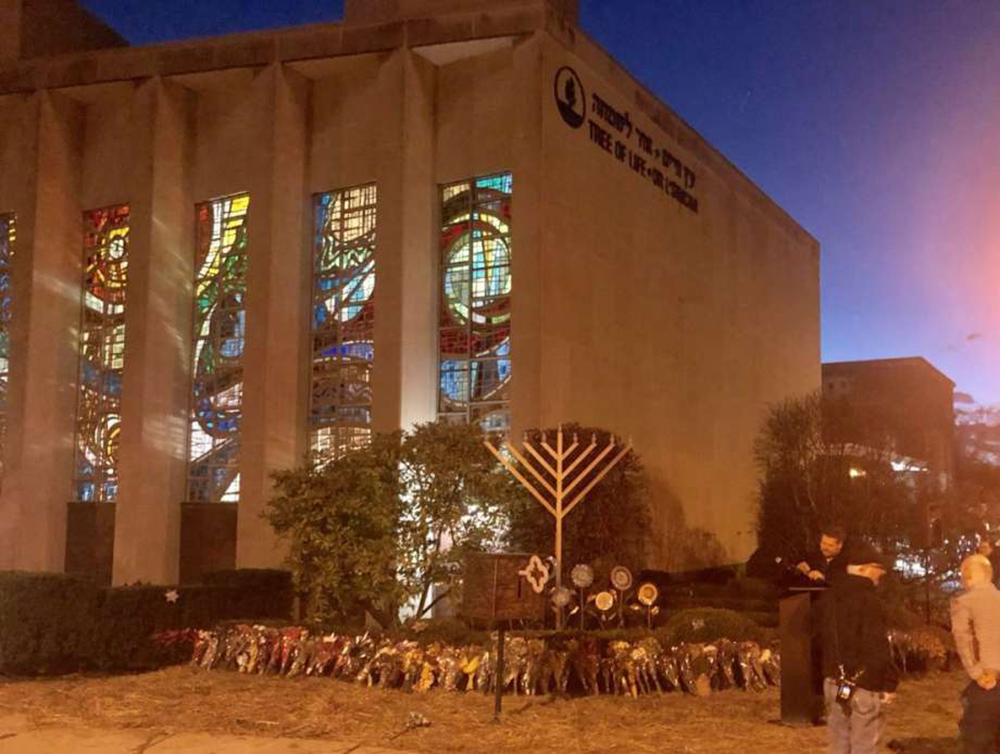 The below is an expert of a speech written for a memorial service held in Kokomo, Indiana for the victims of the attack on the Tree Of Life synagogue in Pittsburgh. Congregation Yeshivat Tzion, a diverse synagogue with an African-American rabbi, hosted the event. Yeshivat Tzion invited the members of a local Reform congregation, and the entire community to their program that was held on November 24.

We must not be silent about the heartrending murder and martyrdom of the Jews at the Tree Of Life synagogue in Pittsburgh. Eleven Jewish lives were tragically cut short by a gunman motivated by hate for the Jewish People. That hate must not go unanswered.

You should be praised that you have made the decision to take time out from your hectic lives and mark the occasion of this attack on our fellow Jews with a memorial observance. We are remembering the fallen now at the end of their shloshim. The shloshim is the traditional Jewish thirty day mourning period. By being here now you are answering hate. You are not being silent. We should remember that Matityahu and his sons chose not to be silent. The Maccabees stood up to hate and they achieved the great things that we remember and celebrate to this day.

Jews from throughout the United States, and beyond it, should draw strength from what is happening in Kokomo today.

Jews from diverse backgrounds joining together in unity and love is a far too rare thing in the American Jewish community now.

Showing love of fellow Jews is one way to combat the haters.

Just as we love our fellow Jews we must hate evil and we must hate those who would seek to do harm to the Jewish People and the Nation of Israel. We must not be silent at this time.

After the recent news about the boycott of Israeli communities in Judea and Samaria by Airbnb, one of the best suggested responses is to boycott the boycotters.

Our 11 brothers and sisters in Pittsburgh who were slaughtered in Pittsburgh 2,400 weeks after our 11 brothers and sisters were murdered in the Olympic Village in Munich in September 1972 by hate-filled Palestinian Arab terrorists. 46 years and the Atlantic Ocean separated these two groups of martyrs and nothing else. They were all killed because they were Jews. 22 souls join the Six Million of the Holocaust and so many more.

Recently it has come to light that the Pittsburgh murderer was also a hater of the State of Israel. We should not be surprised.

We must continue to speak out against the haters of Israel and the haters of the Jewish People. We in Herut have speaking out in our DNA.

The great Zionist leader, Zeev Jabotinsky is the spiritual father of the Herut movement. Jabotinsky proclaimed in “Shir Betar,” his epic Zionist anthem penned in 1932: “For silence is filth.”

We must never be silent.

Yours is a congregation that places a high priority on lifelong Jewish learning and studying classic Jewish texts as well as speaking out. You are following in the steps of the Maccabees, the Zionist rebels of their time who fought the dark forces of the Greek Empire at the time of the Hanukkah miracle.

A Chasidic proverb states: “A little light chases away a lot of darkness.” May the light of your Zionism, your unity, our Hanukkah menorahs, and your Torah do just that.

Wishing you the brightest of Hanukkahs

Moshe Phillips is the national director of Herut North America’s U.S. section. Herut is an international movement for Zionist pride and education. More information about Herut is available at https://www.herutna.org