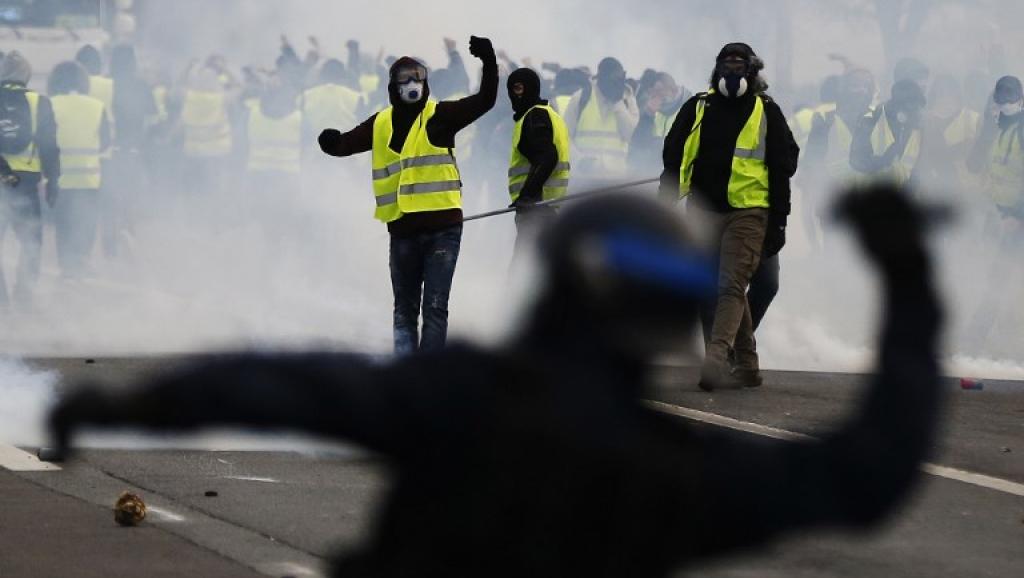 French police arrested hundreds of protesters associated with the so-called Yellow Vest movement as France is now dealing with more fallout from a failed set of carbon taxes designed to tackle climate change.

Police arrested more nearly 1000 people Saturday morning in Paris and 135 people had been injured, including 17 police officers. Police searched protesters for items like the now-famed yellows vests they wear to signify allegiance to the country’s working class. Four people have died and scores more wounded during the weeks-long protests, which began in mid-November.

Protesters attempted to set a drugstore ablaze on the Champs-Élysées, placing burning Christmas trees against the building.  French Interior Minister Christophe Castaner said Saturday that violent outbreaks in Paris were “under control” despite ongoing disorderly acts he declared “totally unacceptable.”

French police supported by armored vehicles fired tear gas at yellow-vested protesters on the Champs-Elysees. The demonstrators were protesting France’s high cost of living. Castaner estimated 10,000 demonstrators had taken to Parisian streets and were among 125,000 protesters throughout the country.

Bracing for a fourth week of violent protests, France closed the Eiffel Tower and other tourist landmarks and mobilized tens of thousands of security officers.  Many shops in Paris were boarded up before Saturday’s planned protests to avoid being smashed or looted, and police cordoned off many of the city’s broad boulevards.

Despite what Castaner said were “exceptional” security measures, protesters still smashed store windows and clashed with police. More than 89,000 police were being deployed nationwide, an increase from 65,000 last weekend, when protests over rising taxes turned into a riot that left more than 130 people injured.

Police in central Paris removed any materials from the streets that could be used as weapons or projectiles during the demonstrations, including street furniture at outdoor cafes.

President Emmanuel Macron made an unannounced visit Friday night to a group of anti-riot security officers outside Paris to thank them for their work. The protests erupted in November over a fuel tax increase, which was part of Macron’s plan to combat global warming.

French Prime Minister Edouard Philippe called for new talks Saturday with representatives of the “yellow vest” movement. He vowed the government would address their concerns about rising living costs.

“The president will speak, and will propose measures that will feed this dialogue,” Philippe said in a televised statement.

President Donald Trump tweeted Saturday that the Paris Agreement, a global effort to reduce global warming beginning in 2020, “isn’t working out so well for Paris” and that “People do not want to pay large sums of money … in order to protect the environment.”

Since the unrest began in November, four people have been killed in protest-related accidents. While Macron has since abandoned the fuel tax hike, protesters have made new demands to address other economic issues hurting workers, retirees and students.

Some are worried that the Yellow Vest movement could spread elsewhere. Police used extraordinary means to put down copycat protests in Belgium, another country seeking to enact stiff taxes on carbon. About 100 people were arrested as the police used tear gas and water cannons against Belgium protesters.  (VOA)