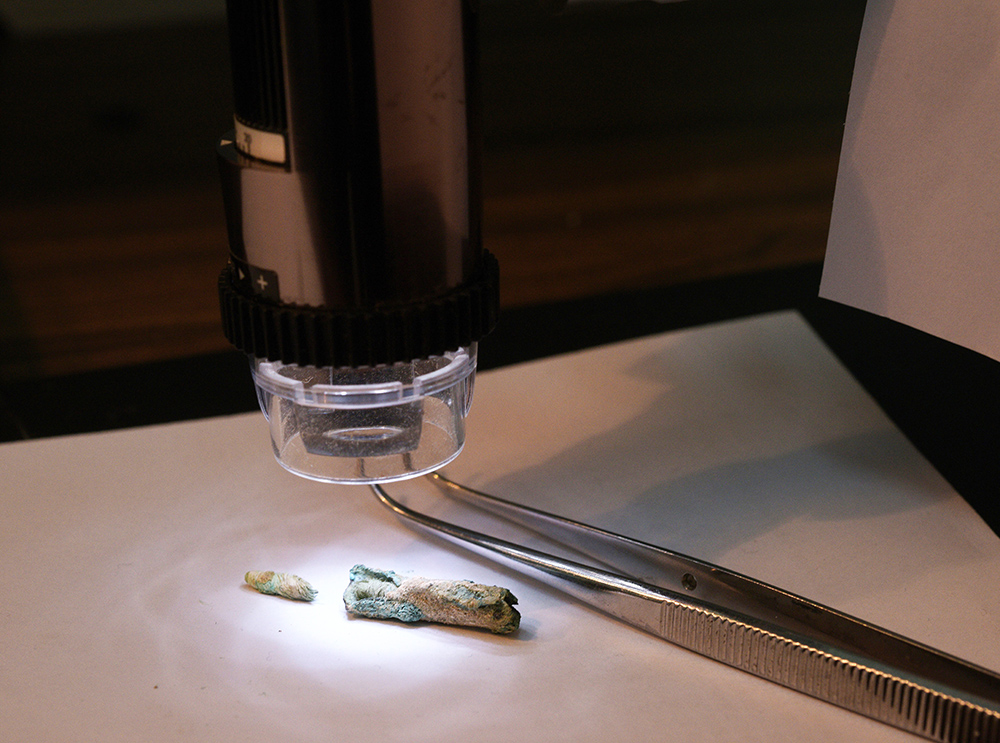 New research by the Israel Antiquities Authority has discovered a unique wick, used to light lamps and dated to the Byzantine period, some 1,500 years ago. Although it is small, its importance is great both because it has been securely identified as a wick and because precious few such wicks have survived from antiquity.

The wick was examined for the first time in the framework of a comprehensive research project on Byzantine settlements in the Negev, conducted by the University of Haifa and led by Prof. Guy Bar-Oz and Dr. Yotam Tepper. As part of the research, Dr. Tepper located finds as yet unpublished from the excavation of the American Colt expedition to the Negev site of Shivta, conducted in the 1930s. The wick was sent for examination to the laboratories of the Israel Antiquities Authority.

Dr. Naama Sukenik of the Israel Antiquities Authority, who studied the wick says: “It seems that this rare find was preserved thanks to the dry climate in the Negev. Oil lamps played a key role in daily life in antiquity, illuminating homes and public buildings after sunset. Lamps made of pottery or glass are often found in archaeological excavations, but to find a wick from ancient times is rare. That’s because they’re made of organic fibers, which normally disintegrate quickly and disappear into the soil, as well as because they are so small and are usually consumed by fire.”

The wick was found in its holder – a small copper tube in which it was inserted when it was lit. Microscopic examination by Dr. Sukenik showed that the wick was made of linen, which comes from the flax plant and is known for its use in textiles and clothing as well as for wicks in oil lamps.

“The Mishnah, tractate Shabbat discusses what materials may and may not be used as wicks to light Sabbath lamps. There too, linen is mentioned as a high-quality material for wicks, because it burns long and beautifully. The Mishnah mentions other wicks, which were made of lesser quality materials and were therefore prohibited for use in Sabbath lamps. Among these were fibers made from the plant called Sodom’s apple, which to this day grows in the Dead Sea area. It seems that the inhabitants of Shivta also chose to light their public buildings with linen wicks. Because flax doesn’t grow in the Negev it probably came from farther north in the country through commerce,” Dr. Sukenik added.

Tests on the quality of the fibers lead Sukenik to believe that the inhabitants of Shivta in the Byzantine period purchased lower-quality linen for their wicks, reserving better quality fibers for the garment industry. “The rare wick examined belongs to a type of glass lamp typical of the Byzantine period – a kind of glass cup or bowl that was filled with oil and provided ample light, even after dark,” Sukenik says.

“Despite the tiny size of the wick from Shivta – only a few centimeters long – it sheds light on one of the most essential and common objects of antiquity, which has almost disappeared from the world, but survived at Shivta,” Dr. Sukenik adds.

The wick and other objects from the Colt expedition at Shivta will be on display beginning on January 24, 2019, at the Hecht Museum in Haifa.