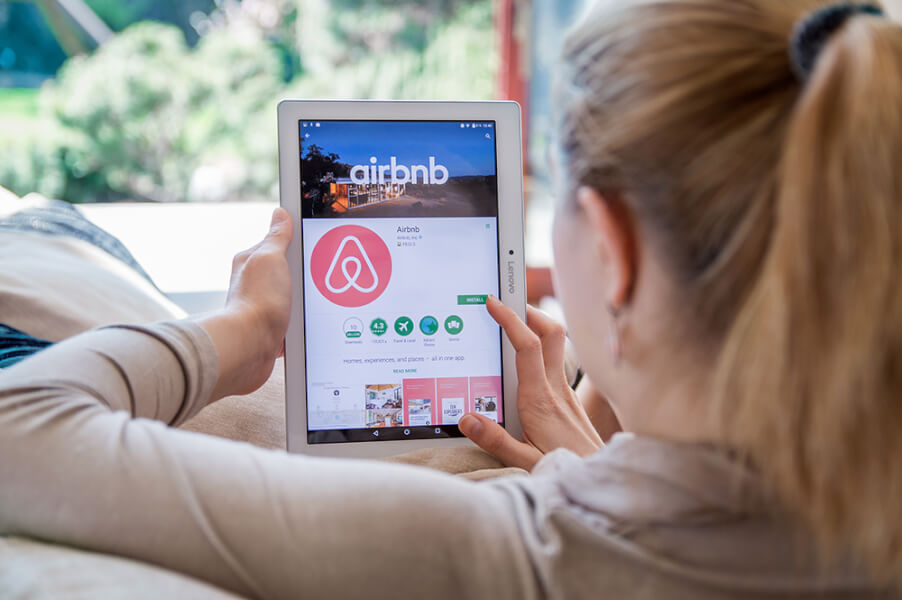 Readers aren’t reminded that Jewish Israelis are “barred from entering” Palestinian areas in the West Bank—meaning they are prohibited from using Airbnb rentals in those areas. Moreover, Israelis are excluded from entering 16 countries in the Middle East, barring them from renting Airbnb properties in these areas

The Guardian’s Jerusalem correspondent Oliver Holmes published an article last week about Airbnb’s decision to remove from its website all properties owned by Israeli Jews in the West Bank (Airbnb to take rentals in Israeli West Bank settlements off website, Nov. 19).

Airbnb has said it will remove from its website all properties in Israeli settlements built on the occupied Palestinian territories in the West Bank, after years of accusations that the company was benefitting from rentals in the illegal outposts.

Here Holmes appears to conflate major settlements in the West Bank with illegal outposts. Whilst the former are considered illegal by many within the international community, the United States represents a major exception, and has, since the early 1980s, intentionally not used the word “illegal” when describing the settlements—going with the non-legal word “illegitimate” instead.

However, “illegal outposts,” the term Holmes uses, refers only to small settlements (sometimes, a few caravans) built without authorization, and deemed “illegal” by the Israeli government. These “illegal outposts” represent a tiny proportion of the overall number of settlements, and are inhabited by no more than a few thousand Israelis. While even the Palestinians, during previous negotiations, have acknowledged that most of the major settlement blocks would remain part of Israel in any final agreement, that’s not the case with such illegal outposts.

The accommodation bookings website announced on Monday that around 200 listings would be taken down in what will be seen as a victory for the Palestinian-led anti-occupation movement.

This is misleading, as it suggests that the forces behind Airbnb’s decision are Palestinian groups, when, in fact, many of the main instigators of Airbnb’s ban are well-financed Western NGOs with extreme anti-Israel agendas.

The discriminatory nature its policy is revealed by the simple fact that Airbnb has thousands of listings in occupied territories (Turkish Occupied Cyprus, Moroccan-occupied Western Sahara, Tibet, etc.) and in countries where the government engages in extreme violence or oppression against vulnerable minorities. Yet the company has decided to apply this policy solely to properties owned by Jews—and only Jews—in the West Bank.

Holmes then cites a report by Human Rights Watch to legitimize the Airbnb ban.

The announcement came before the publication on Tuesday of a damning report by the New York-based advocacy group Human Rights Watch on the negative implications of its settlement business.

Whilst it’s unclear if the Guardian reporter read all 65 pages of the report by HRW, Guardian readers would of course be unaware of evidence attesting to the group’s long record of engaging in an often obsessive campaign to demonize and delegitimize the Jewish state. Indeed, HRW’s current “Israel and Palestine Country Director,” Omar Shakir, is a longtime BDS activist who has used rhetoric indicating support for a one-state solution.

Further into the article, Holmes provides background on the settlements:

Israel captured the West Bank from Jordanian forces in 1967 and continues to control and occupy the area, although Palestinians have limited self-rule over small enclaves.

Ideologically driven Jewish nationalists who claim all of historic Palestine have since created outposts there, pushing out Palestinian residents.

This is vague and misleading, as its unclear what he means by “pushing out Palestinian residents.” If he’s referring to areas where Palestinians have self-rule, Area A, then this is an erroneous claim, as Israeli Jews aren’t even permitted to drive on roads in Area A, let alone live there.

Further, the pejorative characterization of Jews who live beyond the green line as “ideologically driven nationalists” is extremely misleading, as many who move to settlements do so for practical reasons, having more to do with the lower cost of living in such communities, and a host of other non-ideological reasons.

Finally, if by “all of Palestine,” he’s including Gaza, then his claim that most or all settlers who reside there want “all of historic Palestine” is absurd, as few if any settler activists promote re-occupying Gaza and including that territory as part of Israel’s final borders. Conversely, its the norm and not the exception for Palestinians in both the West Bank and Gaza to claim “all of historic Palestine” for a future Palestinian state.

Today, more than half a million settlers live in what have become sprawling towns connected by a network of roads that cut up the West Bank.

Actually, the current West Bank settler population is roughly 400,000, not “more than a half a million.” He may be misleadingly including Jews who live in Jerusalem neighborhoods beyond the Green Line. Roughly 215,000 Jews live in these “east” Jerusalem communities.

Holmes then quotes, of course, uncritically, a spokesperson from HRW:

“For two years, Human Rights Watch has spoken with Airbnb about their brokering of rentals in West Bank settlements that are illegal under international humanitarian law and for which Palestinian ID holders are effectively barred from entering,” he said.

However, Guardian readers aren’t reminded that Jewish Israelis are “barred from entering” Palestinian areas in the West Bank—meaning that they are prohibited from using Airbnb rentals in those areas. Moreover, Israelis, by virtue of the fact that they are citizens of the Jewish state, are excluded from entering 16 countries in the Middle East, barring them from renting Airbnb properties in these areas.

Oliver Holmes has offered something akin to a master class in how the Guardian—by use of selective, distorted and at times outright false information—skews what are ostensibly “straight news stories” to promote the pro-Palestinian agenda and paint Israel in the worst possible light.

Adam Levick is the managing editor of UK Media Watch, a CAMERA affiliate, since 2010.