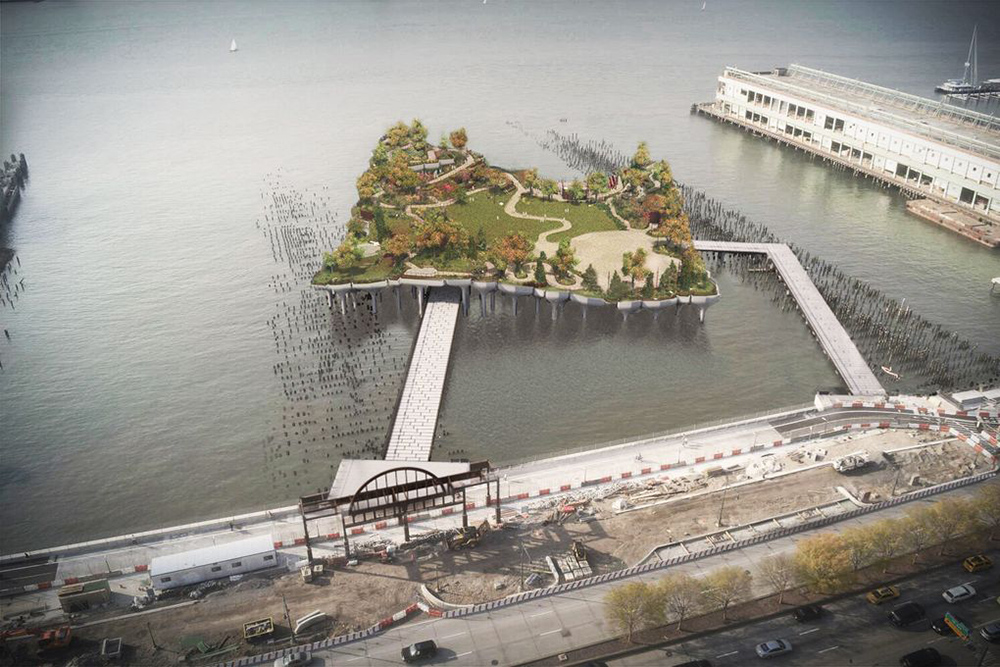 There is something new, green and expensive rising in the Hudson River. Along the West Side of Manhattan, the much-talked-about plans are beginning fruition. The pilings for Diller Island, the futuristic park and performing arts venue, are being built. The dream is being sponsored by Barry Diller, the entertainment mogul, and his wife, fashion designer Diane von Furstenberg. With a hefty price tag of $250 million, the local formerly known as Pier 55, is slated to open in spring of 2021. The estimate budget jumped from a mere $35 million, mainly because of the design complexity and legal battles. The project struggled against seven years of planning and bureaucratic maneuvering while wrangling with an environmentalist opposition group, due to the protected status of the river.

The cornerstone was laid this week, with workers installing a distinctive system of concrete supports. The park, named after Mr. Diller, will feature a performing arts center, with a 700-seat amphitheater for music, dance and theater productions. As reported by the NY Times, British designer Thomas Heatherwick, is creating a 2.4-acre platform which will seem to rise out of the river like a green Neverland. The supports surrounding the perimeter will appear as clusters of Champagne-glass-shaped planting pots seemingly sprouting from pilings beneath the riverbed. The addition of two walkways, which will connect the park to the shoreline and make it part of Hudson River Park, are also already underway.

Brian Aronne, Senior Vice President at Hunter Roberts Construction Group, is coordinating the construction. He says, much of the work will be regular concrete slabs, but the park will “rest” on 132 planted pots, especially made from its own custom-sculpted foam mold. Each pot is about 30 feet tall and weighs over 90 tons. The dock workers will use shackles and cables to keep the pot level and position it precisely on top of the narrow concrete pilings. “It’s all once-in-a-lifetime kind of stuff,’’ Mr. Aronne said. “It’s all never been done before.’’

Last year, the whole project was almost discarded as Mr. Diller’s project couldn’t seem to gain ground against the opposition led by the real estate developer Douglas Durst, who called the venture an environmental threat. The plans were only revived thanks to Governor Andrew M. Cuomo, who brokered an agreement to help settle the dispute.

“It was a gift to the city and the people of New York, and then to have it opposed by what turned out to be narrow reasons not having to do with the public interest, it was devastating,” Mr. Diller said, noting that both Gov. Cuomo and Mayor Bill de Blasio support the park.