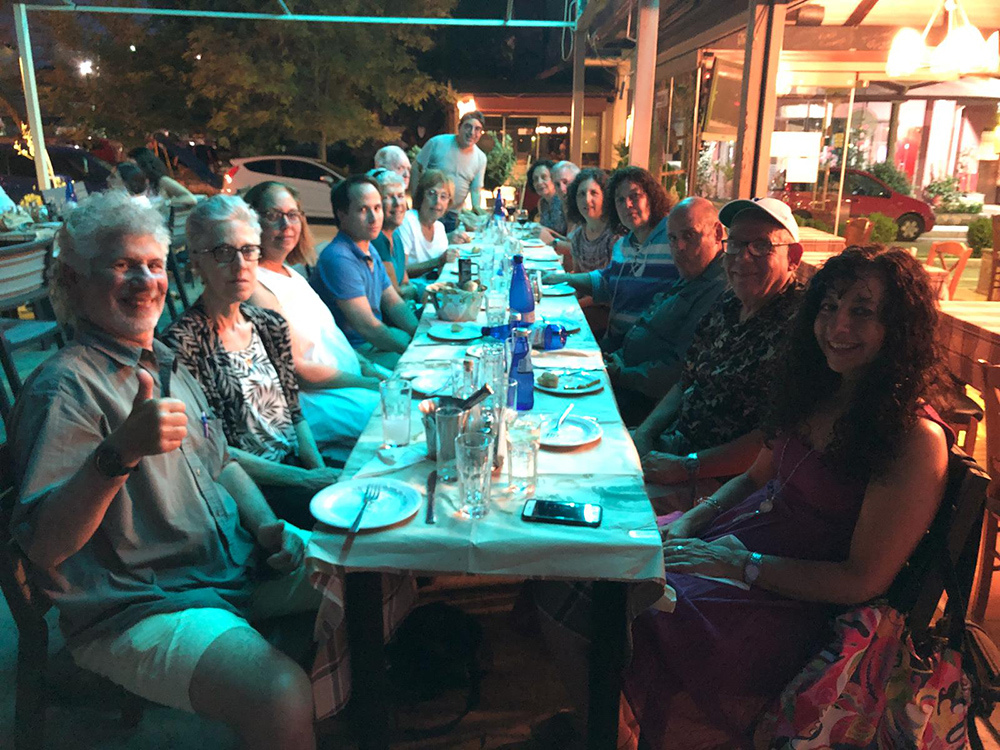 Did you know that Sephardic Jews have a long and rich history in the Balkan countries, such as Greece, Albania, Kosovo, Macedonia, and Bosnia? This past summer a group of 21 Sephardic Jews from the New York area, eager to learn more about their roots, embarked on an exciting trip to explore this heritage.

Rabbi Nissim Elnecavé, an expert on Ladino Sephardic history, Executive Director of The Sephardic Jewish Brotherhood of America, and one of the enthusiastic travelers explained,

“After the expulsion from Spain in 1492, Sephardic Jews settled in those lands, which was known at the time as the Ottoman Empire.”

Marcia Haddad Ikonomopoulos, trip organizer and Museum Director at Kehila Kedosha Janina, the Greek Synagogue in Manhattan, said, “The purpose of our tour was to create more of a connection with our Sephardic roots. For 22 years, the Association of Friends of Greek Jewry has been running tours to Jewish Greece, often incorporating visits to nearby countries with Sephardic Jewish presences. In addition to learning and connecting, we focus on discovering ways to help, sustain, and revitalize these dwindling Jewish communities.”

Rabbi Elnecavé added with excitement, “In addition to all we can give these communities, we also have so much to gain! There is a treasure trove of rich tradition, culture, music, and prayer, and we keep discovering so many new old things; it’s like digging for gold. The more we reach, the more we find! It would be too great of a loss to let it go. I see these trips and this revival as a vital contribution to the entire Jewish world.”

“In the two weeks of travel, we spent many joyous moments in the various communities.” Marcia shared. “We learned and saw so much and met so many wonderful people.”

Rabbi Elnecavé was surprised to see many Jewish tourists in Thessaloniki (also known as Salonika,) Greece. He said, “At one point, I turned around in the hotel lobby and noticed that 80% of the people were Jewish, and many were speaking Hebrew. Greece is becoming a hotspot because it’s fun, the prices are reasonable, and it has magnificent scenery.”

In Salonika the group walked through the colorful Modiano market, which was formerly the Talmud Torah; the Jewish Museum of Saloniki, the refurbished cemetery, and Yad Lezikaron, a Synagogue which was constructed after the war from remnants of other synagogues destroyed by the Nazis.

Rabbi Elnecavé said that one of his favorite moments was when they opened up the arc and sang with the exact tunes they use at the congregation at the Sephardic Jewish Center of Forest Hills. He said, “I was amazed at how this tradition survived and has been preserved!”

The next stop was the picturesque and cozy city of Bitola, known as Monastir by the Jewish population–which was at 3,000 before WWII. The travelers snapped photographs of its lush, green mountains and immaculately maintained, colorful buildings where Jews once lived. As they viewed Jewish artifacts at the Ataturk Museum, the group learned that most of the Jewish population was destroyed in the Holocaust. One of the stops on the itinerary was to visit the Jewish cemetery, which is being restored by an organization from Israel.

Rabbi Elnecavé stated, “The restoration of the cemetery in Bitola is an example of one of the many projects taking place in the Balkans to revive Jewish heritage.”

In the small town of Pristina, Kosovo, the travelers met Leke and Xhangile, two ethnic Albanian Muslims whose grandparents rescued Jews during the Holocaust. They served as tour guides in two old Jewish neighborhoods that were vibrant 100 years ago and explained how many Jews were saved during the war because their people made oaths to save Jewish lives. Oaths in their culture are considered holy so that even when the Nazis were scouting around their homes searching for hidden Jews, Leke and Xhangile’s brethren remained loyal.

The next stop was Sarajevo, Bosnia, where Sarajevo Roses, splashes of red paint that fill concrete scars caused by a mortar shell explosions, mark the pavement throughout the city. These markings testify to where bombs fell during the Bosnian War in the early 1990s and echo much of the strife the region experienced in both World Wars.

Said Rabbi Elnecavé. “The Jewish influence there is tremendous. At the turn of the century, one out of every five people was Jewish! The Jews of Sarajevo were regarded as some of the most educated of the Sephardic Jewish communities.”

“Spending a Shabbat Sarajevo was one of the highlights of our trip,” Marcia said. “During our three-day-stay, the president of the Jewish community, Professor Eli Tauber, highlighted the history of the community; took us to Jewish sites and the Jewish Museum, as well as the exceedingly emotional Museum of Crimes Against Humanity. The Jewish population before WWII was at 12,000. Today it’s at about 800. Through all of this, the passion to continue a Jewish presence in the city is still apparent.”

Rabbi Elnecavé added, “During the 1990s, with the Bosnian War, much of the Jewish youth went to Israel and settled there. Now, there is no official rabbi in town, but Rabbi Eliezer Papo serves as the community’s rabbi, although he resides in Israel. A young Hazan runs the prayers every Shabbat and on Holidays.”

The group ended their trip back in Greece in a town called Ioannina (pronounced Yanina) and then went on to Athens. Ioannina is a majestic, small town whose old Synagogue still stands and functions during the High Holidays. Because of the efforts of Marcia’s congregation Kehila Kedosha Janina in New York, the synagogue and its members, who live all over the world, maintain a strong connection.

In Athens, the group met the very vibrant Rabbi Gabriel Negrin. Rabbi Negrin is currently spearheading a variety of Jewish-related projects, such as developing the kashrut market in Athens, providing supervision to many factories and restaurants there.

“At the end of our travels, we took home a shopping list.” Marcia said, “A Torah and siddurim for Sarajevo, funds to complete the restoration of the cemetery in Bitola, and support in the efforts to re-instill Jewish learning and life into communities like those in Albania. It is our hope that through our expeditions and our learning, we will make a difference, one community at a time, one country at a time.”

If you would like to contribute to one of these important projects or travel to the Balkans on a Sephardic Heritage Trip, email [email protected]