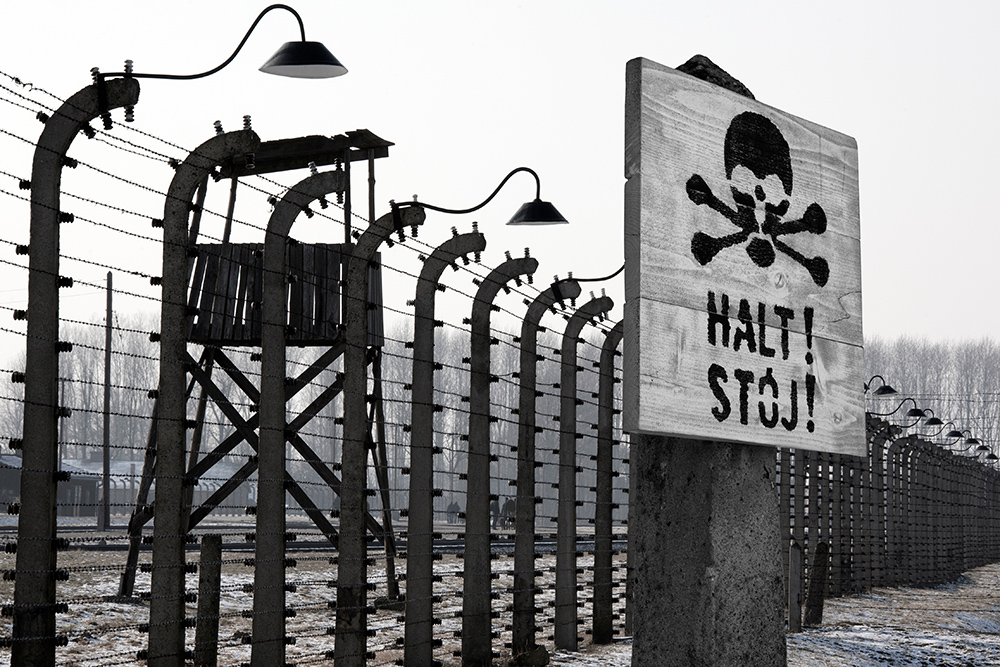 CNN reported that one in five said they have too much influence in the media and the same number believe they have too much influence in politics. Meanwhile, a third of Europeans in the poll said they knew just a little or nothing at all about the Holocaust, the mass murder of some six million Jews in lands controlled by Adolf Hitler’s Nazi regime in the 1930s and 1940s.

The results of the poll included interviews with more than 7,000 people across Europe, with more than 1,000 respondents each in Austria, France, Germany, Great Britain, Hungary, Poland and Sweden.

CNN reported that in Austria — the country where Hitler was born — 12% of young people said they had never heard of the Holocaust. Austria also had the highest number of people in the survey saying they knew “just a little” about the Holocaust. Four out of 10 Austrian adults said that.

More than a quarter of respondents (28%) said most anti-Semitism in their countries was a response to the actions of the state of Israel.

And nearly one in five (18%) said anti-Semitism in their countries was a response to the everyday behavior of Jewish people. A third of people CNN surveyed said that Israel uses the Holocaust to justify its actions, with half the respondents in Poland agreeing. Only one in five disagreed. A third of Europeans said supporters of Israel use accusations of anti-Semitism to shut down criticism of Israel, while only one in 10 said that was not true.

A third of Europeans said commemorating the Holocaust distracts from other atrocities today, with higher than average numbers of Germans, Austrians, Poles and Hungarians stating that.

Speaking to Ilanit Chernick of the Tazpit Press Service (TPS) for an extensive interview, Prof. Judy Baumel Schwartz of the Israel and Golda Koschitzky Department of Jewish History and Contemporary Jewry at Bar-Ilan University in Israel said, “Should the Jews worry? Yes. Should this be a new worry? No, they should never have stopped worrying.”

Professor Baumel Schwartz told TPS that anti-Semitism and the hatred of Jews began a long time before the Holocaust. “Hatred of Jews began a very long time before Hitler. Hitler and the Nazi regime brought it to a new extreme that never existed before, which included mass murder of the Jews and sanctions by the government that had never been seen before. Anybody who thought that because there was a Holocaust that took place against the Jewish people 70 years ago and now everything is going to be great forever, then they’re fools.”

TPS reported that Professor Baumel Schwartz highlighted that just because one is the “ultimate other,” it doesn’t mean they’re going to be hated, but when people have problems they look for someone to blame and “who better to blame then the ‘ultimate other.’”

According to Baumel Schwartz, this anti-Semitism is “old hat.” Quoting her mother, she said “that the generation of people born after the Second World War [up until the 80s] grew-up in a very strange world where if you lived in the West, it was not fashionable to be overtly anti-Semitic after the Holocaust.

“During that time we were the anomaly, we lived in a world in which we thought ‘hey, it’s the end of anti-Semitism,’ but it wasn’t, it was just a temporary situation and now Europe has gone back to the way it always was,” she told TPS. Asked by TPS about her thoughts on if anything can be done to stem the anti-Semitism in these European countries, Baumel Schwartz said the first thing is education and “for the Holocaust to be mandatory in the curriculum of various countries, but truthfully I don’t think anything will help – I think it all has to be done, but if a country isn’t naturally a tolerant country in terms of minorities, forget it, nothing is going to help.

“You can educate, educate, educate and legislate as much as you can, but it’s not going to change social prejudices. It never did, so why should it change now?” she told TPS.

Meanwhile, Yad Vashem said on Tuesday morning that it is deeply troubled by the lack of Holocaust awareness and the state of antisemitism in Europe. In a statement following the release of the survey, Yad Vashem, the World Holocaust Remembrance Center said it “is deeply concerned about the initial report of the CNN survey, according to which one-third of Europeans claim to know little or nothing about the Holocaust.

It said that the survey also highlights the troubling fact “that many entrenched hateful anti-Semitic tropes persist in European civilization, seventy-five years after the end of the Holocaust.

“While antisemitism does not necessarily lead to genocide,” it continued, “anti-Semitism was central to the Nazis’ worldview and the basis for their ‘Final Solution’ to eradicate all Jews and their culture from the face of the earth,” highlighting that “the results of this survey prove the necessity to intensify broad-based efforts in the area of Holocaust education and awareness, which is essential to any effort to contend with anti-Semitism. Yad Vashem remains determined to foster the requisite knowledge and provide means to teach about the Holocaust.

“While Holocaust education plays an indispensable role in combating anti-Semitism, it must also be augmented by effective government legislation and enforcement,” the center said. “Yad Vashem believes that by raising public awareness about the Shoah, not as a closed chapter in human history but as a relevant topic for our own time, the nations of Europe and elsewhere will be better equipped and motivated to fight racism and anti-Semitism.”

Avner Shalev, Chairman of Yad Vashem told CNN that “the survey highlights the troubling fact that many entrenched hateful anti-Semitic tropes persist in European civilization, 75 years after the end of the Holocaust. “The result of this survey proves the necessity to intensify broad-based efforts in the area of Holocaust education and awareness, which is essential to any effort to contend with anti-Semitism,” he concluded.

On Tuesday alone, several major stories about the international scourge of proliferating anti-Semitism appeared in the media.

Israel National News reported that the former president of Georgia Mikheil Saakashvili excoriated an Israeli political strategist employed by his country’s ruling party, blasting the consultant as a “dirty Jew” during an anti-Semitic tirade.

According to a report by Israel Hayom, Saakashvili, who served as President of Georgia (a Russian state) for two terms, repeatedly used anti-Semitic slurs against Moshe Klughaft last week, assailing the Israeli political consultant as a “money-grubbing Jew,” and “dirty Jew”. Klughaft is employed by Georgia’s ruling party, Georgian Dream, while Saakashvili leads the largest faction in the opposition, the conservative United National Movement. During his tirade against Klughaft, Saakashvili also accused the Israeli political consultant of “working with Romanian communists”.

The Georgian government has provided Klughaft with extra security, giving him the status of a “protected citizen” since his arrival in the country last week. The local Jewish community decried Saakashvili’s attack on Klughaft.

An umbrella organization representing Georgian Jews published a letter signed by 40 Jewish leaders in the country, saying, ”We, the Georgian Jews, are outraged and condemn the anti-Semitic and discriminatory statement of Mikheil Saakashvili to the strategic adviser of the ruling party, Moshe Klughaft. This is not the first time that Mikheil Saakashvili has used hate speech against Jews, and therefore we expect a response from political forces, the media and non-governmental organizations.”

On the other side of Europe, things were quite dismal in terms European Jews proudly identifying with their heritage in a public manner. INN reported that nearly half of 557 respondents in a survey of Dutch Jews said they were afraid of identifying as such.

Of the respondents, 43 percent said they take active steps to hide their Jewish identity, such as wear a hat over their kippah or hide Star of David pendants. Many respondents cited their perception of a rise in the prevalence of anti-Semitic sentiment, with 48 percent saying they avoid situations where they suspect they may be exposed to anti-Semitic reactions.

The results of the survey were published Monday.

The poll was conducted by the EenVanddag television show of the NPO 1 channel with the JMW Jewish group and the Central Jewish Board of the Netherlands.

The Times of Israel reported on Monday that an Israeli journalist was recently attacked in Berlin while trying to film a report, with video capturing a group of men harassing her and then apparently attacking her with a firecracker.

Antonia Yamin claimed the attack occurred because she spoke Hebrew, with several men throwing a firecracker at her and at her cameraman, while trying to film a report. A video of the incident was published Sunday on Twitter by Yamin, Europe correspondent for Israel’s public broadcaster Kan.

On a more sanguine note, Orit Arfa at JNS reported that amid debate about the future status of the European political right and a wave of anti-Jewish sentiment and actions, conservative Chancellor Sebastian Kurtz of Austria has positioned himself and his government as a leader in the fight against anti-Semitism by convening the November 21st conference entitled “Beyond Anti-Semitism and Anti-Zionism: Securing Jewish Life in Europe” in the context of the Austrian Presidency of the European Council.

The event evolved into a celebration of friendship between Austria and Israel, with Dr. Moshe Kantor, president of the European Jewish Congress, presenting Kurz with the “Navigator to Jerusalem Award” at the conference gala.

“This is possibly the first time a nation which holds the European Union Presidency has attempted to address anti-Semitism and anti-Zionism in a constructive and holistic manner,” Kantor told JNS. “We are grateful to the Austrian government for partnering with us, and accepting the role of pushing for lasting and durable solutions to increasing anti-Semitism.”

The European Jewish Congress presented senior leaders with a “Catalogue of Policies to Combat Antisemitism,” which includes, first and foremost, the worldwide adoption and implementation of the International Holocaust Remembrance Alliance (IHRA) Working Definition of Antisemitism.

This IHRA working definition equates anti-Semitism with delegitimization of the Jewish state, a categorization that has been criticized largely by the European and Israeli left. As reported in Haaretz, a group of 35 distinguished Israeli academics signed an open letter ahead of the conference stating: “This fight against anti-Semitism should not be instrumentalized to suppress legitimate criticism of Israel’s occupation and severe violations of Palestinian human rights.” It went on to state: “It is nonsensical and inappropriate to identify anti-Zionism with anti-Semitism.”

Stimulus Talks Near Brink of Collapse After Rancorous Meeting