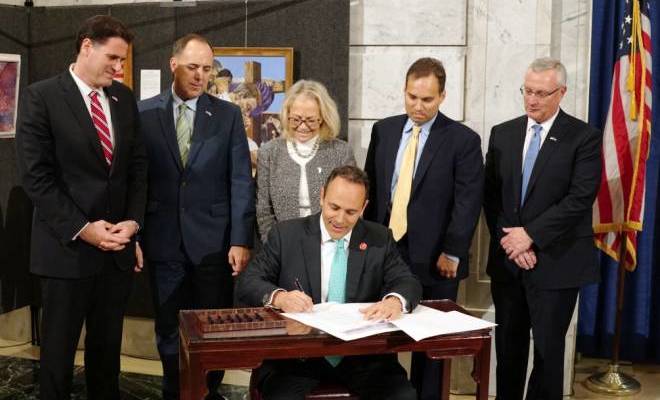 Kentucky’s governor, Matt Bevin, has signed an executive order that will bar any state contracts with companies that support a boycott of Israel, while calling the BDS (Boycott, Divestment and Sanctions) movement anti-Semitic and “repugnant.”

Bevin signed the order on Thursday during a ceremony at the Kentucky Capitol with Israeli Ambassador Ron Dermer and Consul General of Israel to the Southeast United States Judith Varnai Shorer.

Bevin called the movement anti-Semitic and “repugnant.” He referenced passages from the book of Ezekiel in the Bible about being a watchman, saying Kentucky was watching and sounding the alarm.

“The State of Israel is an important friend and trading partner to the Commonwealth,” said Bevin. “We will not allow state resources to benefit entities that intentionally engage in discriminatory practices to harm the sovereignty and economic prosperity of any ally nation. Today’s executive order makes it clear that Kentucky condemns the BDS movement and that we stand shoulder-to-shoulder with our friend, Israel.”

Dermer thanked Bevin for “making clear that anti-Semites are not welcome in the Bluegrass State.”

The executive order states that “the Commonwealth of Kentucky unequivocally rejects the BDS movement and stands firmly with Israel,” noting that BDS practices threaten the sovereignty and security of a US ally and friend of the Commonwealth.

“Boycotting Israel is immoral, as it specifically targets the only democracy in the Middle East, a staunch ally of the United States for decades,” noted Matthew Goldberg, Director of Community Relations for the Jewish Federation of Louisville. “Everyone in the Commonwealth of Kentucky should be proud that we are now on record as officially opposing the demonization of Israel.”

Kentucky has a robust trade relationship with Israel, which resulted in the export of nearly $85 million in goods and services last year. As the 17th largest state exporter of goods in the country, Bevin noted that Kentucky’s growing economy benefits from free trade that is not hindered or restricted by discriminatory practices.

In 2017, exported goods accounted for more than 15 percent of the state’s domestic product, and nearly 4,500 companies exported goods from Kentucky to other countries.

“The Christian community is grateful to Gov. Bevin for his leadership in taking this action to protect Israel from trade discrimination,” said Dave Wicker, Congressional Liaison for Christians United for Israel. “The BDS movement is inherently discriminatory and anti-Semitic and has no place in the Commonwealth. I am proud that Kentucky is taking a stand to oppose religious discrimination against our greatest ally, Israel.”

Bevin has previously joined the governors of all 50 US states and the mayor of the District of Columbia in signing the “Governors United Against BDS” pledge.

In 2016, the Kentucky House of Representatives adopted House Resolution 250, opposing the BDS movement and expressing support for the sovereignty of Israel. State Representative Tim Moore cosponsored the resolution, which noted that, if left unchecked, the BDS movement threatens to weaken the Jewish State. (UWI)