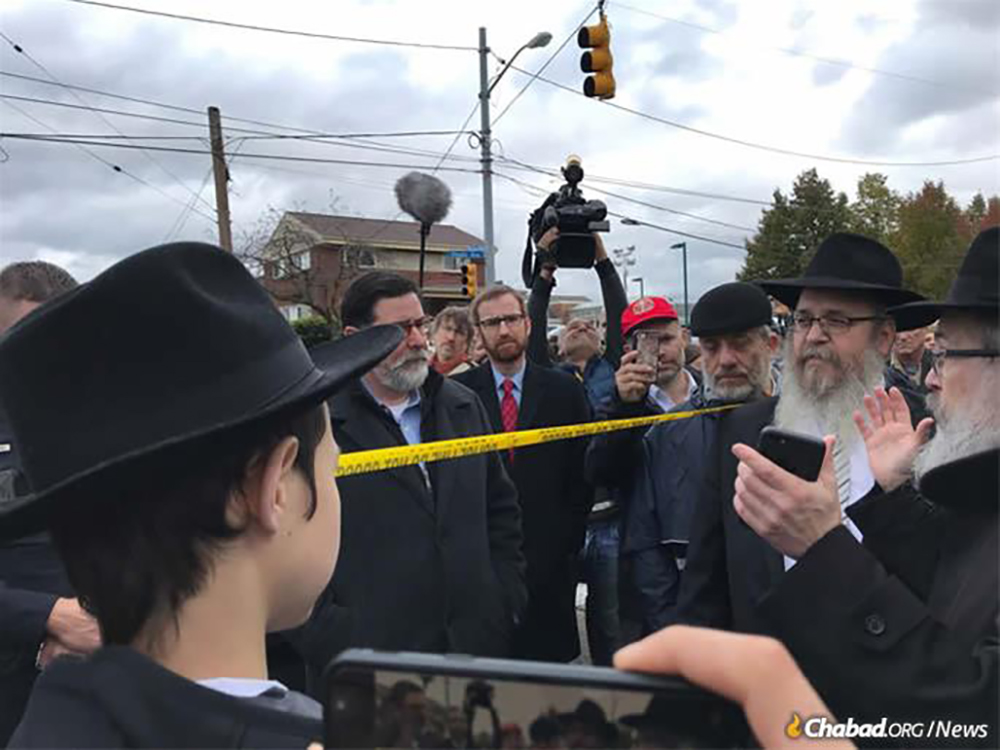 Last Sunday morning, as Pittsburgh police released the names of the 11 victims at the Tree of Life massacre, the school week was starting a few blocks away at Yeshiva Schools of Pittsburgh.

“How do you know it was a lone wolf?” one fifth grade boy nervously asked his teacher, Rabbi Zev Greenwald. The students had all heard various things; some knew more, some less.

“We wanted to make sure there was no misinformation,” says Greenwald. “We spoke about the fact that everything is in G d’s hands, but also that we’re safe here, and what to do in case you see someone who might be a bad person. They’re all processing it in different ways.”

Pittsburgh’s oldest Jewish day school, Yeshiva Schools—or Yeshivat Achei Temimim Lubavitch—was founded by Rabbi Sholom and Chaya Posner in 1943, and is celebrating its 75th anniversary this year. Soviet Jewish immigrants who spoke a broken English, the Posners were sent to Pittsburgh by the sixth Lubavitcher Rebbe, Rabbi Yosef Yitzchak Schneersohn, of righteous memory, and had a difficult start in the Steel City. “You plow and plant,” said the Rebbe, who had recently escaped the Nazi inferno, “and I will water [your efforts] with my tears.”

Few believed that the couple in old fashioned clothes would succeed. The rabbi’s beard and long coat were deemed too Jewish, and his wife’s wig was seen as arcane. They had a hard time even renting an apartment. But they kept at it, opening the school with five students. By now it has grown to more than 400 students, with separate divisions for both girls and boys, and has educated generations of Jewish Pittsburghers. A multiple-time winner of the U.S. Department of Education’s Blue Ribbon, Yeshiva is an important part of the fabric of Jewish Pittsburgh and the Squirrel Hill neighborhood where the attack took place.

At the Center of a Community

“I was born here, and I myself was a student of the yeshivah,” says its principal, Rabbi Yossi Rosenblum. “This is a very small, tight-knit community, and everyone here is somehow connected.”

Like Melvin Wax, an 88-year-old widower who was killed on Shabbat morning. He was one of the yeshivah’s original students back when it was located on Dawson St., in the city’s Oakland section.

“I remember Mel very clearly as a young man,” says Chaim Balsam, one of Posner’s first five students and today a board member of the school. Back then, Yeshiva had a day school and an afternoon Talmud Torah, and Balsam can’t recall which Wax attended. “He was a sweet soul, he always was. I was shocked to hear his name among those killed.”

The yeshivah, which moved to Squirrel Hill in the early 1960s, is a community institution. “The yeshivah helped this community grow,” says Balsam, who attended public school before transferring to Yeshiva Schools for seventh grade.

Beyond the school, Yeshiva’s campus serves as the central Chabad-Lubavitch center and synagogue in the area, and the movement’s headquarters in western Pennsylvania. Rochel McDoodle, who attends Chabad, lost the parent-figures who took her in and adopted her as an adult, Bernice and Sylvan Simon, to the carnage. Wax was her cousin.

“Mel liked to tell jokes and was a proud father and grandfather,” she says. “He absolutely loved his family.”

McDoodle, who was likewise born in Squirrel Hill, attended New Light growing up, where her uncle was rabbi. “There’s almost nobody in that room whom I didn’t know in one way or the other,” she says, choking back tears.

The neighborhood’s cozy scale has magnified the proximity of the attack. “It’s shocking to everyone that this could happen in sleepy little Pittsburgh,” says Rosenblum. This could be especially frightening for the children growing up in Squirrel Hill, the real-life Mr. Rogers’ neighborhood where children ride bikes through the streets and walk to school themselves. Rosenblum says that Yeshiva staff have been working closely with mental health professionals and carefully communicating with parents. With the funeral schedule still unannounced, this week promises to be a difficult one for everyone in the city, school children included.

Rosenblum says that in addition to ensuring the students are coping with the tragedy, he wants them, especially the older ones, to learn about the Jewish response to such dark moments. On Sunday evening a mass vigil was held at Soldiers and Sailors Memorial Hall, with 2,000 people in attendance. The Yeshiva high school boys also came, tefillin in hand, offering attendees the opportunity to do a mitzvah.

Despite the rain, throngs of people lined up to don the tefillin and say the Shema prayer under the open umbrellas the boys were holding.

“The response was tremendous,” says Rosenblum. “People were very receptive. The Rebbe [Rabbi Menachem M. Schneerson, of righteous memory] taught that the response we must have is to do more, to bring more light into the world, and through that will come comfort. The boys are doing their part.”

Yeshiva Schools is a kindergarten through 12th-grade school, with a separate boys and girls division. “The girls have been going out to distribute Shabbat candles,” says the girls’ school principal, Batsheva Deren. “It has been very therapeutic for the girls.”

Yeshiva is not the only Jewish school in Pittsburgh, the others being Hillel Academy and Community Day School. All three schools work together closely, highlighting another Pittsburgh hallmark: unity and cooperation.

“All the rabbis, all the organizations, the schools, everyone here works together,” says Rosenblum. “Everybody here is genuinely trying to work on behalf of the Jewish community, and you can see the real unity here in the response.”

Students Do Mitzvahs and Pay Their Respects

On Monday afternoon, escorted by police, Yeshiva’s middle and high school students walked over to Tree of Life. Prayer books in hand, girls grades seven through 12 went first, reciting the afternoon minchah prayer at the site.

“They started with such a booming Ashrei [the opening prayer of minchah],” says Deren. “I didn’t realize how many people would be there, family members, friends, people were crying. It was such a spontaneously beautiful moment, very powerful.”

The girls have also spent extra time joining the global #LetsChalkShabbat initiative, in which an illustration of Shabbat candlesticks and the candle lighting times is drawn with chalk on the sidewalk. Deren says that although both the school and parents have tried to shield younger students from the tragedy, some of the younger grades are also doing special things in response. “The fifth-grade girls are baking challah to distribute this week,” she says, while another grade delivered coffee and donuts to local police. “Each class feels they need to do something to bring some more light in response to this darkness.”

When the girls had finished, the boys’ division headed for Tree of Life. As they walked to the site, singing, neighbors along the route waved. “G d bless you!” one woman cried out. When they got there, crossing over the yellow crime scene tape that will hang for as long as the FBI investigation continues, they put arms over each other’s shoulders, and under the gray sky began to sing Ani Maamin, a Holocaust-era song of hope:

“Ani ma’amin b’emunah sheleimah, beviat hamoshiach; v’af al pi she’yismamaya, im kol zeh ani ma’amin,” go the words. “I believe with perfect faith in the coming of Moshiach; and even though he may tarry, nevertheless, I believe.”