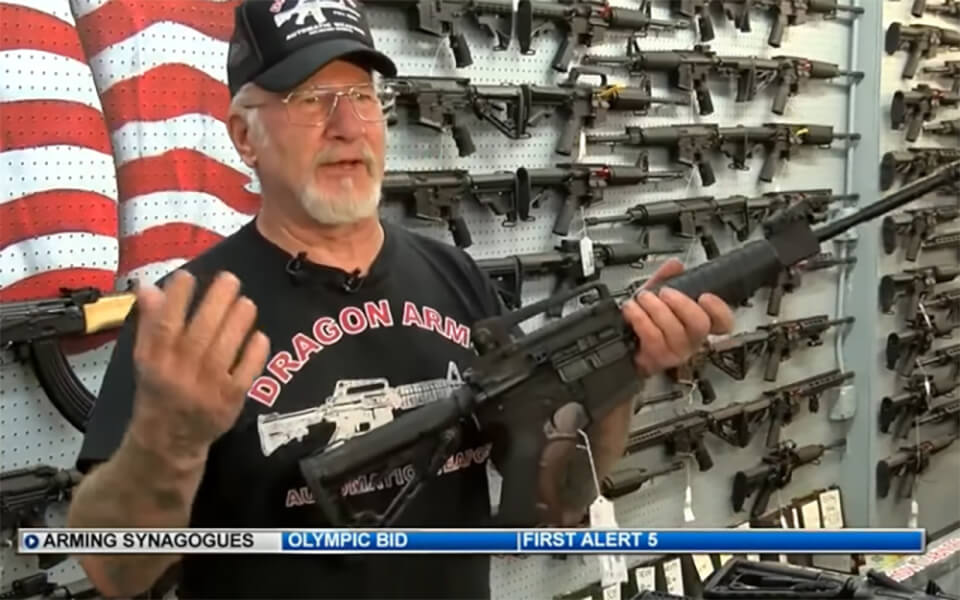 KOAA News5 in Colorado reports Dragon Arms gun shop just outside of Colorado Springs’ owner Mel Bernstein is offering rabbis a free AR-15 or handgun, and will include training and ammunition.

“Lets say there’s a fire in a synagogue. What do you grab? You grab a fire extinguisher right?” Bernstein, who goes by the name Dragonman, said on the NBC affiliate’s program. “OK, lets say somebody comes in and starts shooting everybody. What are you going to grab? You grab your AR-15 or a rifle or a handgun.”

During the shooting on the Saturday before last, “people sitting in the synagogue, they were sitting ducks,” and “nobody’s stopping him,” Bernstein said of the shooter, anti-Trump extremist Robert Bowers.

“You have to have the tool to fight back, and this is the tool, and I’m donating these to the rabbis.”

The KOAA interview with Temple Beit Torah board President Jeff Ader reveals the level of ignorance prevalent among some 2nd Amendment opponents regarding firearms, as Ader explains his rejection of Bernstein’s offer by speaking at length of the AR-15 as a “weapon of mass destruction in a sense. If it can fire multiple rounds per second, anything can happen,” apparently unaware that the AR-15 is the semi-automatic version of the M-16 and is incapable of automatic fire.

Ader’s assertions went unchallenged by interviewer Jessica Barreto. Apparently unaware that a handgun has the exact same rate of fire as an AR-15–that is, as fast as the trigger finger can shoot–Ader can be “in talks with Bernstein” to accept a free handgun from him with a clear conscience.

All of the nine major tyrannical regimes of the twentieth century confiscated the weapons of the populations they planned to murder or terrorize en masse. The nine regimes are listed below: