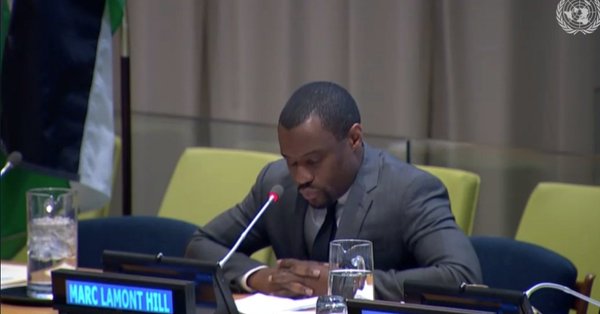 CNN fired contributor Marc Lamont Hill Thursday, after he delivered a controversial speech before the United Nations that was criticized by the Anti-Defamation League and other Jewish organizations according to Washington Free Beacon.

“Marc Lamont Hill is no longer under contract with CNN,” a spokesperson told the Washington Free Beacon.

In the Wednesday speech, Hill said that while he prefers nonviolence, standing with the Palestinian people meant supporting the use of violence as well the Free Beacon explained.

Speaking on the occasion of the annual International Day of Solidarity with the Palestinian People   World Israel News reported:  “he also appeared to justify terrorism, saying the international community must allow the Palestinian Arabs to use any methods necessary to resist Israel, implying that violence against Israel is legitimate”

“Slave revolts and self-defense and tactics otherwise divergent from Dr. King or Mahatma Gandhi were equally important to preserving safety and attaining freedom,” he argued at the U.N.’s International Day of Solidarity event. “If we are to operate in true solidarity with the Palestinian people, we must allow the Palestinian people the same range of opportunity and political possibility.”

“If we are standing in solidarity with the Palestinian people, we must recognize the right of an occupied people to defend itself. We must prioritize peace, but we must not romanticize or fetishize it,” he continued.

Professor Hill also believes in  “a free Palestine from the river to the sea” , a commonly used slogan by anti-Israel radicals which essentially means a Palestinian state should include the entirety of current Israeli territory, from the Jordan River to the Mediterranean Sea.

The ADL examined  Hill’s speech in detail, you can link to their article from their tweet below

“Those calling for ‘from the river to the sea’ are calling for an end to the State of Israel.” It's a shame that once again, this annual Palestinian event at the UN does not promote pathways to a future of peace & instead promotes divisiveness and hate. https://t.co/U1FgZ3JZvm