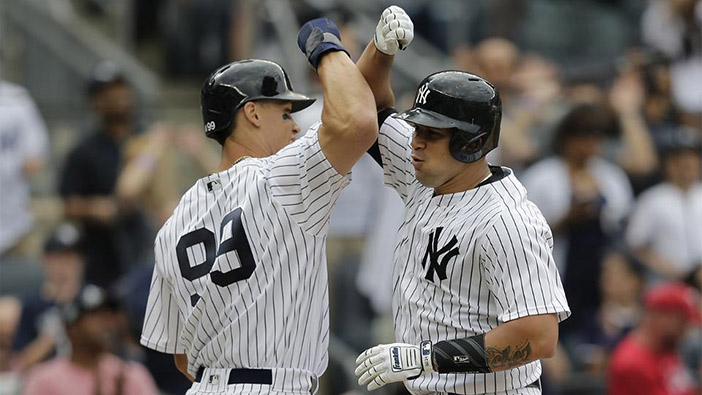 They’re called the Bronx Bombers for a reason. The power house New York Yankees, despite falling short of a division title and settling for a winter-take-all wild card game, reached the pinnacle of their offensive prowess by not only winning 100 games, but also setting a record for most home runs hit by a team in a single season.

This despite the acquisition of supper slugger Giancarlo Stanton who belted 59 home runs a year ago for the Miami Marlins to go along with rookie of the year slugger Aaron Judge who hit 52 a year ago. Both fell short of the 40 home run total with Judge being sidelined with a fractured hand for nearly a month

However the Yankees got contributions from other areas of their lineup. Aaron Hicks and rookie Miguel Andujar each hit 27 home runs. Short stop Didi Gregorius hit a career hit 27 dingers. And late season acquisition Luke Voit, a first baseman, added 13 taters to add to the total. Also adding to the total was Gleyber Torres. A surprised home run contributor, as he not to be expected as a power threat. Torres hit 24 round trippers in his rookie campaign.

So as a team, the new record established on September 29, one day before the season ended, the Yankees continued with their reputation as home run hitters dating back to the days of Ruth and Gehrig, as a team noted for hitting the long ball.

Other things that got in the way for the Yankees were challenges but disappointing play by their young backstop Gary Sanchez, who showed tremendous promise last year and Greg Brid who has not quite recovered from a serious leg injury at the beginning of the 2017 season.

Despite the great totals, the Los Angeles Dodger, have the most home run hitters with sever over 20 this year. It would have taken Gary Sanchez to hit two homeruns for the Yankees to have seven on their roster.

Also, it’s only Stanton who will have driven in over 100 RBI for the season. An usually low number for a team that has hit so many home runs. Having said that, the Dodgers, despite their power numbers, don’t have a single player near the 100 RBI plateau.

Another intriguing aspect of the Yankees season is the amount of rookie of the year candidates. While much of the focus will be on Los Angeles Angel Shohei Ohtani the Japanese outfielder/pitcher. But Torres and Andujar should receive attention for the award, as well.

With their 100 win total, the Yankees are now one of three teams, along with the Houston Astros and Boston Red Sox to reach that plateau.

How fitting that it was Giancarlo Stanton’s 38th home run of the season that gave the Yankees the record for 266 round trippers, two more than the previous record held by the Seattle Mariners who set the record in 1997. Those Seattle teams were led by Hall of Famer Ken Griffey, Jr. who blasted 56 home runs, Jay Buhner who hit 40 and the young Alex Rodriguez who belted 23.

The Yankees will face a surprising Oakland A’s team that also has power this week. Khris Davis, a designated hitter, led baseball with 48 home runs. Davis added 123 RBIs to do along with his home run totals.

If the Yankees are to survive their one game playoff, they will face their arch rivals the Boston Red Sox whose two starts Mookie Betts and J.D. Martinez are MVP candidates with their power and high batting average numbers. The series would open with a best-of-seven at Fenway Park. If the Yankees do beat Oakland, expect a lot of fireworks between the team teams like always.

US resorts adapt to new normal of skiing amid pandemic