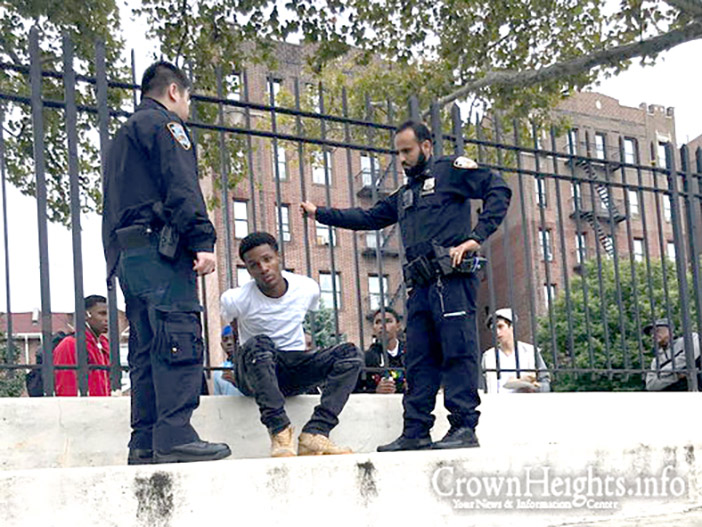 A Jewish man was violently assaulted in an unprovoked attack while crossing a street in Crown Heights on Monday afternoon.

The incident occurred at around 3:50pm at the intersection of Empire Boulevard and Albany Avenue. The victim was accosted as he was crossing the street by a black teenager carrying a wooden stick. When the victim realized he was about to be assaulted he attempted to flee.

The victim ran into the cleaners owned by R’ Shloime Junik, whose son tried opening the door to provide shelter to the victim, though not fast enough. The attacker managed to swing and strike the victim over his back and shoulder causing the stick to break in half. The perpetrator then threw the second piece into the store and striking both the victim and another bystander and causing further injuries.

Attempting to flee, the suspect ran down Albany Avenue into Lefferts park with multiple witnesses chasing after him. Both Shomrim and police were called and the suspect was apprehended, police arrived a short while later and arrested the suspect.

Much to the shock of the people observing the suspect being arrested, officers said that he had just been released less than 30 minutes earlier after he was caught shoplifting from a bodega on Rutland Road and Albany Avenue. He was released on a desk appearance ticket for that crime.

After his arrest the suspect was charged with felony assault, menacing, harassment, criminal possession of a weapon as well as a hate crime.

On August 8th of this year, a man was caught on camera choking and robbing a woman in Crown Heights. The attack occurred on the corner of Schenectady Avenue and Bergen Street.

In surveillance video that was released by the NYPD, it showed the 34-year old victim being attacked by a man walking in her direction. In the video she is seen being thrown against a parked car and placed in a choke hold until she gives up her backpack. The man says something to her before escaping with her cellphone and iPad. The victim suffered bruises and cuts to her face and body. The video showed that the suspect had a beard. He was wearing dark clothing and red sneakers.