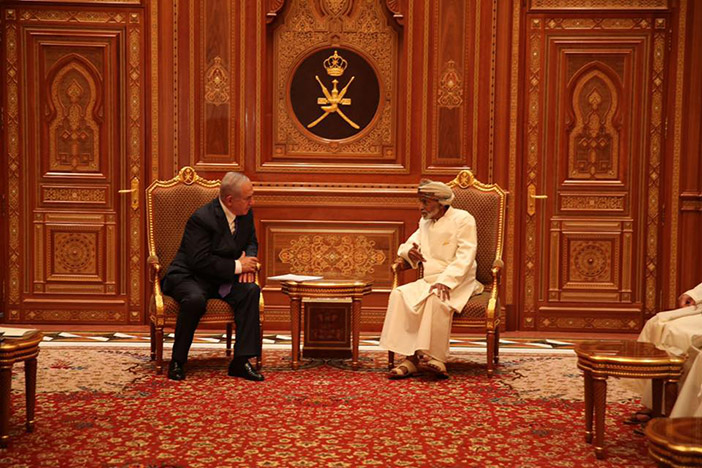 Israeli Prime Minister Benjamin Netanyahu traveled to Oman on Friday, for what amounted to the first official visit of an Israeli leader to the Gulf state since Shimon Peres travelled there in 1996 as Prime Minister. The meeting was kept a secret until Netanyahu returned to Israel on Friday afternoon.

“Netanyahu’s visit is a significant step in implementing the policy set by Prime Minister Netanyahu to strengthen the ties with the countries in the region, while leveraging Israel’s advantages in defense, technology and economics,” read a statement by the Prime Minister’s Office.

“This visit is a significant step in implementing the policy outlined by Prime Minister Netanyahu to strengthen ties with the countries of the region, while leveraging Israel’s advantages in security, technology and the economy,” read a statement by the Prime Minister’s Office, adding that Netanyahu and Sultan Qaboos bin Said al Said discussed “ways to advance the peace process in the Middle East and discussed a number of issues of mutual interest for peace and stability in the Middle East.”

Netanyahu’s visit came just a few days after Palestinian Authority Chairman Mahmoud Abbas (Abu-Mazen) visited the Gulf state on Sunday and was reportedly aimed at finding ways for Oman to contribute to the peace process.

After the meeting, Oman Foreign Minister Yousuf bin Alawi called upon the various Arab states to accept and recognize Israel as a major player in the region.

“Israel is a state present in the region, and we all understand this. The world is also aware of this and maybe it is time for Israel to be treated the same [as other states] and to also bear the same obligations,” bin Alawi said while speaking at the IISS Manama Dialogue security summit in Bahrain on Friday, “We are not saying that the road is now easy and paved with flowers, but our priority is to put an end to the conflict and move to a new world,” he added.

In another development, as news broke of Saturday’s synagogue shooting in the Squirrel Hill section of Pittsburgh, Prime Minister Netanyahu said in a statement that he is “heartbroken and shocked by the murderous attack today at a synagogue in Pittsburgh.

Minutes later, President Reuven Rivlin echoed the sentiments saying that “our thoughts and prayers are with those affected by the events in Pittsburgh, Pennsylvania, We are thinking of ’our brothers and sisters, the whole house of Israel, in time of trouble’, as we say in the morning prayers,” he said.

“I am sure that the law enforcement and legal authorities in the US will investigate this horrific event thoroughly and that justice will be served on the despicable murderer,” Rivlin added.