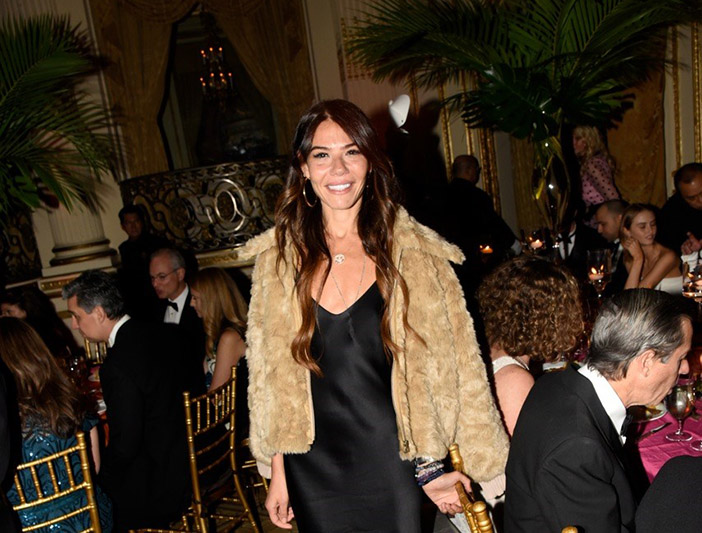 The mostly private Mugrabis have burst onto the scene as their son David’s nasty divorce from wife Libbie continually appears on Page Six. Libbie recently attended “The Casita Maria Gala” at The Plaza Hotel where she was seated at the same table as a girl she found naked with her husband, David, in their Hamptons swimming pool. Libbie left the party in a huff after finding the drama too much to bear. She and her husband David have been in the tabloids nearly every other day as they fight over his massive assets.  The estranged couple own homes on the Upper East Side, Water Mill and Bridgehampton and Libbie is trying to gain joint title to their homes and artwork being that there was no pre-nup.

Libbie filed a restraining order against David in July after claiming he hit her with a $500,000 25-pound Keith Haring sculpture that she wheeled into court as an exhibit. The couple have two children who attend Collegiate and Spence and Libbie is unhappy that she is forced to live on $25,000 a month when they were spending more than $3 million a year. Last year David sued a New Jersey storage facility named “Mana Contemporary” for holding hostage over $100 million in art including 1,300 works. The Mugrabis also claimed “Mana” damaged at least 11 works they were storing. The presiding judge ordered “Mana” to turn over all the art agreeing that the dispute was bringing the Mugrabi business to a standstill. Whether the current judge presiding over Libbie’s case, Douglas Hoffman, will rule in the Mugrabis favor is anyone’s guess. In a recent ruling the judge held that David was entitled to sell his assets including 52 pieces of art and a $72 million townhouse because they were owned by LLC’s.

Kevin McDonough, Libbie’s lawyer, claimed the townhouse and art were marital assets. In an ironic twist, David’s father, bought “Catwoman” Jocelyn Wildenstein’s (ex-wife of mega art collector Alec Wildenstein) townhouse for $15 million in 2013. While currently engaged in a vitriolic divorce, the beginning of Libbie and David’s marriage was a fairy tale come true when Libbie met David 13 years ago on a plane to Aspen and fell madly in love, marrying a year later. Their wedding was held at The Pierre with the world’s top art collectors including Tony Shafrazi and Larry Gagosian attending.

The Mugrabis are an under-the-radar family that boasts an art collection worth more than $5 billion-they are the current day Wildensteins-owning nearly 1,000 Andy Warhols-the largest collectors of his art. The Guardian newspaper said, “they do not just dominate the market for Andy’s work-they are the market.” They also have works by Renoir, Picasso, Rodin, Ernst, Daumier, Damien Hirst and Jeff Koons with most of their art stored in Zurich and Newark, New Jersey. Jose Mugrabi was born to a Syrian Jewish family in Jerusalem in 1939 where his family managed a grocery store. At the age of 16 he went to Colombia to work in textiles and became one of the largest importers. In 1982 he moved to New York where he met art dealer Jeffrey Deitch and began collecting art.

The Mugrabis invested in Madoff’s fund through Fairfield Sentry fund and lost their money which they claimed was under a million dollars. Their sons Alberto and David are mostly low key and when they do go out they are usually the least conspicuous partygoers. That is until 46-year-old Alberto Mugrabi married Colby Jordan in September 2016 at the Hotel du Cap Eden Roc in France in one of the most talked about weddings of the year.

Alberto Mugrabi was a jet setting playboy until he wed 23-year-old Colby Jordan whose father owns a massive private equity firm. The guest list at the more than $20 million wedding included Mary Kate and Ashley Olsen, Heidi Klum, Owen Wilson, Sienna Miller, Princess Beatrice, Karlie Kloss and Larry Gagosian. The security at the event was at White House levels with guests receiving a two-page briefing detailing the stringent policies which required them to carry special photo identification. This desire for secrecy that the Mugrabis have steadfastly clung to has been jeopardized by the tabloids fight to get new details about this increasingly sordid story.