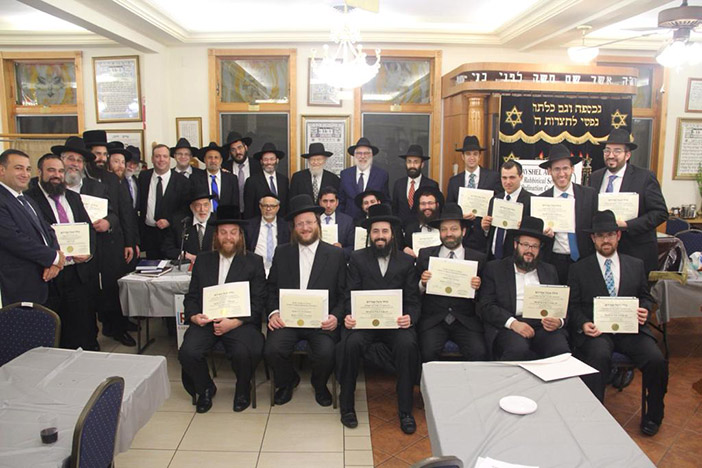 A palpable electricity filled the air at the Aur Torah Sephardic Minyan of Staten Island on Wednesday evening, October 10th (Rosh Chodesh Cheshvan) as over 300 people gathered for the monthly Rosh Chodesh (Cheshvan) Suedah and Conference of the Rabbinical Alliance of America/Igud HaRabbonim dedicated in honor of the 10th Chag HaSemicha of the world renowned Kollel Ayshel Avraham Rabbinical Seminary under the exemplary leadership of HaGaon HaRav Yaakov Dovid Spivak, Shlit’a. Each successive Chag HaSemicha has graduated the finest Rabbonim who go on to proudly serve Klall Yisroel in multiple capacities.

The long and hallowed tradition of Kollel Ayshel Avraham, (that was named after Rabbi Spivak’s late father, R’ Avraham Spivak, Z”L, who was mesiras nefesh for Klall Yisroel and Torah), is to provide an opportunity for professional men of all ages and backgrounds to study for the Rabbinate as well as actively engage in such time-honored vocations as the chaplaincy, kashrus, kiruv rechokim work and educational innovation; among many other fields of endeavor.

Serving as master of ceremonies for the august gathering was Rabbi Moish Schmerler, a musmach and president of the Rabbinic Alumni Association of Kollel Ayshel Avraham. Rabbi Schmerler also serves as the director of the Igud HaRabbonim. “We would not be here tonight if not for the visionary leadership of our Rosh Kollel and Presidium Member of the Igud HaRabbonim, Rabbi Yaakov Spivak, Shlit’a, Rabbi Schmerler declared.

Rabbi Schmerler thanked Chacham Ahahron Zev, Shlit’a, the Mara D’atra and Mr. Oshri Reuven, president of Aur Torah for opening their shul for this Chag HaSemicha and said, “Rabbi Zeev’s love for every Jew is unmatched. He is not only involved in Staten Island Judaism but Judaism around the world. We are very lucky to have him as a dedicated member of the Igud HaRabbonim.”

Said Rabbi Schmerler, “the haftorah of last week has the most essential words “Ohr LaGoyim”–a Jew has to be a light unto the nations. For a rabbi, it is not okay to sit in your own corner but you must be out there advocating for everyone, to transform into a light unto the nations and a light to everyone else. Your role is to become involved and enmeshed in the problems of the Klall and to use your Semicha to touch the lives and impact all Jews.”

He added, “Let us remember that it was the Rosh Kollel, Rabbi Spivak who decades ago was out there advocating for his people, immersing himself in fighting for Torah Judaism, for the freedom of Soviet Jews, and battling cults and missionaries on a daily basis. He was constantly writing and speaking and sounding a clarion call for others to get involved.”

Rabbi Mendy Mirocznik, the Executive Vice President of the Igud HaRabbonim said, “There is a common thread between the Rabbonim here tonight and our elected officials. Tonight, we have with us New York State Supreme Court Justice Orlando Marrazzo, Jr. and Staten Island Assemblyman Matthew Titone. The common denominator is found in Parshas Noach. In Genesis, chapter 6, verse 16, the Torah tells us that Noach was commanded to create a Tzohar, which means a precious stone or a window to illuminate the Teva. This window means that it is incumbent on all of us to look out our own windows, to search for others in need, to see their problems and to act upon helping them. And if we do so, we create a precious stone that will radiate with us all. “

He added: “It is not enough to display the certificate of rabbinical ordination on the wall, but to use the power that we have to do for others. Great leaders such as our elected officials who use their time and resources to help others are our example and inspiration. It is the job of all the musmachim to live beyond our own realm. To cry to the Heavens for others problems as if they are our own. The entire Presidium of the Igud HaRabbonim, who are with us tonight exemplify this.”

Rabbi Yaakov Klass, a renowned Talmid Chocham, the Torah Editor of the Jewish Press and a presidium member of the Igud HaRabbonim spoke of the unity of rabbonim and the outstanding class of musmachim. “As we know, the Torah was translated into 70 languages and 70 tzaddikim were put in separate rooms for their interpretation of the Torah, so as not to be influenced by each other. The work that came out was exactly the same as the others. Everyone was on the same page. Our responsibility is to give Chiyus and Ahavas Torah to each other. This is what I witnessed when I visited with this very special class of musmachim. They are all very serious learners who are striving to help Klall Yisroel in a panoply of ways.”

The featured speaker of the evening was Rabbi Yehoshua Hecht, Chairman of the presidium of the Igud HaRabbonim and Rabbi of Beth Israel Chabad of Norwalk, Connecticut. He told the assemblage that “just as Noach had to endure an entire year in the teva with the behemos and chayas he did not give up. We too as Rabbonim can never give up on any Jew. When we deliver a shiur, we must do it with life, with cheyshek. When we daven, we daven for life. A Rav has to be on fire to inspire the baal habaatim.

He added, “When you come into the ‘Teva’ you are engaged in the davening, in the Limmud HaTorah and with the One that gives us the Torah. You have the power to transform the world and Rabbonim have the siyata d’shmaya to help. Noach was a tzaddik but he did not make baalei teshuvah. That is indeed our job. A person was created to recognize Hashem and thus elevate everyone else in the world. Rabbonim have the power to bring zchar. We can’t do it all but it does not release us from trying.”

To the great delight of the gathering at the Chag HaSemicha, Rabbi Spivak announced that his vast collection of Divrei Torah and Chiddushim on Sefer Bereishis is now available in a book on Sefer Bereishis (soon to be published in English as well). Rabbi Spivak expressed his heartfelt appreciation to the Ribono Shel Olam for sending him the magnificent people that he works with each day and for sustaining him in his lifelong tafkid of disseminating Torah around the globe.

Quoting from Bereishis, Rabbi Spivak declared, “If it were not for the great Rabbonim that surround me, we would not be here tonight and if were not for these people there wouldn’t be the “Yesh M’Ayin” that we have. I do not know what the future holds for Rabbi Mendy Mirocznik, but this is an incredibly talented man on so many fronts. We also owe a great debt of gratitude to Rabbi Moshe Schmerler who is the “get it done” guy and another “Yesh M”Ayinnik”. His growth in the last several years in his leadership role has been nothing less than superb.

Speaking of the diverse and dedicated class of musmachim, Rabbi Spivak said with palpable emotion reverberating in his voice: “You have no idea what it is like sitting with this group during shiurim and imbibing their wisdom. When we daven for the “ingathering of the exiles” this class is truly representative of this. Men of different backgrounds coming together to exalt and extol Torah. Each one learning g’schmack. I guarantee you that 150 years ago the yiddin in Te’eman never heard a Chassidishe havorah, and I guarantee you that 150 years ago that the Chassidim in the Ukraine never heard the Sephardic accents of the Eydas HaMizrach.”

He added, “Of course when we daven of the ingathering of the exiles we are speaking of everyone being together in Eretz Yisroel, but first the geula is “l’at l’at”–it is slow in coming. It came to America after the European churban and now in our times, we have reached the four corners of the globe.”

With a profound sense of humility and sincerity, Rabbi Spivak choked up when he said, “You have no idea what it is like to sit in a sheilos and teshuvos shiur and hear a Chassidic yid in his accent speaking and an Eydah Mizrachi Yid speaking in his accent. How many Goanim of yesteryear were zoche to hear what “little ol’ me” is hearing now? How extraordinarily grateful I am and how incredibly blessed I am by the Ribono Shel Olam to see the coming together of all Yiddin for the sake of our Torah Ha’Kedosha. This is a gevaldige zach, a true nes nigla in every sense of the word.”

Speaking of men who achieve “ground breaking and unprecedented” success, Rabbi Spivak gave well deserved credit to Rabbi Yechiel Malik, a vice-president of the Igud HaRabbonim and the director of the Orthodox Jewish Division of the New York State Chaplains Task Force for bringing students to the kollel from the Satmar community that had previously been totally insulated along with men from Litvishe and Sephardic backgrounds.

“Hashem gave Rabbi Malik a gevaldige talent. It took a lot of courage to do what he did,” said Rabbi Spivak.

In addition to distributing the Semichas, Rabbi Spivak added that the musmachim would also be receiving certificates of praise and acknowledgement from elected officials such for their unwavering commitment to public service as well as a copy of Rabbi Spivak’s latest Sefer.

Proudly reading out the names of the 10th class of Kollel Ayshel Avraham’s semicha program, Rabbi Spivak addressed each musmach personally and told the olam of their own unique strengths and characteristics.

At the Chag HaSmicha the Kollel presented to Aur Torah a proclamation recognizing the Shul’s dedication to Klal Yisrael and to Rabbi Aharon Zeev a Rabbinic Leadership Award for his service to the Rabbinate.

At the conclusion of the Chag HaSemicha, Rabbi Spivak said, “Tonight all of Klall Yisroel wishes every one of the musmachim a huge Mazel Tov and brochos for the long and successful future. And the future of each musmach is inextricably intertwined with the future of every Jew in this world. Go out, with strength and the knowledge that you can will make a difference in this world. May Hashem will it so.”