Are Jews Safe at College in America?? Time to Think Again 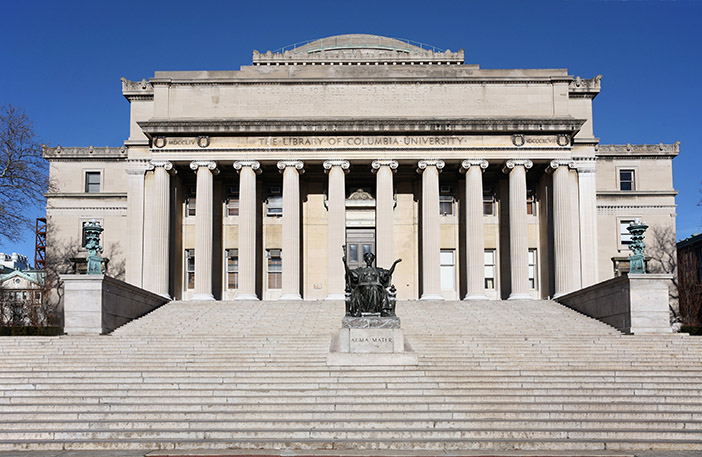 It’s still unthinkable, but today predictable. We are experiencing the exponential growth of Jew hatred at America’s universities; especially Columbia, New York City’s ostensible citadel of highest learning. Columbia was first on the list of universities and colleges with the most Jew hatred on-campus (David Horowitz Freedom Center). Not new is the absence of administrative concern for the growing ostracism, harassment, and lack of physical, mental or scholastic safety for campus Jews. The University simply ignores assaults on Hillel, and Israelis, or simply a Jew wearing a yarmulka, or anyone in empathy with either. Columbia’s Jewish spokespersons profess concern for “all” students despite the constant stream of abuse of its Jews.

A new low, even for Columbia, was just reached when the daughter of Israel’s Consul General to New York, Danny Dayan; Columbia Sophomore and IDF Officer Ofir Dayan, was attacked without provocation or redress. Israel’s Consul General in NY was a guest speaker at Columbia and already was targeted and slandered as a “War Criminal.” Ever since, Ofir Dayan expressed publicly her fear for her personal safety. The campus chapter of Students for Justice in Palestine (SJP) called her a “murderer” then a “terrorist” and angry mobs of their PLO supporters would follow and harass her. Ofir’s belief was that at least Columbia would protect her, but she soon found that it stood by blind, deaf and mute.

The campus chapter of Students Supporting Israel (SSI) confirmed that they had been threatened the previous year by angry, frightening Palestinian supporters and believed the assault would escalate to physical violence. SSI filed a thorough official Complaint, setting forth specific violations of Columbia’s Rules of Conduct by specific Jew hating groups of students. University policy normally provides review by the student government except that the administration termed it “too complicated” for a student run Board and summarily dismissed the Complaint in March of 2018.

This sadistic reign of terror against Columbia’s seemingly hapless Jews begged for a protest. On October 4th, 2018, the University kept outside its main gates at Broadway and 116th Street, some 50 diverse participants. Behind police barricades, were members of American’s for a Safe Israel (AFSI), seven women from the newly recreated Jewish Defense League, The Columbia Chapter of Alumni for Campus Fairness, and Columbia’s very own SSI Chapter, all peacefully bearing simple signs of alarm. Their conduct remained in marked contrast to the years of continuous fury and censorship from SJP demonstrations throughout colleges nationally.

The violent, hurtful words and actions by specific groups of students and faculty at Columbia occur in a long standing, ever growing academic atmosphere of massive delegitimization of Zionism, Israel and Jewish practice. Columbia receives, but fails to disclose large donations from equally concealed foreign entities, despite student and faculty demands for disclosure. The university continues to promote fictitiously documented and insightful histories demonizing Jews and Israel. It’s community freely disseminates hateful propaganda and leaves no room for counter arguments or facts. In particular, the departments of Middle Eastern and South Asian Studies (collectively known as MESAAS), have a history of open support for the Boycott, Divestment and Sanctions (BDS) of Israel. Anti-Israeli petitions and resolutions are endorsed and only Israel’s very right to exist is denied while the faculty, like Joseph Massad, calls for its destruction. This blunt Jew hatred was guaranteed to anyone wishing to study a course in which Israel would be inserted.

Specific faculty have reported to maintain the singular isolation and persecution of matters Jewish. Brinkley Messick pledged to have nothing to do with any Israeli academic journals or institutions or to teach or attend an Israeli conference. Anupama Rao is reported to have signed a petition encouraging no less than The American Anthropological Association to boycott any Israeli academic institution. George Saliba is reported to have instructed a Jewish student that he had no possible claim to the land of Israel and no voice in the debate, having green eyes, instead of the Semitic brown eyes of hate of Saliba. Muhsin al-Musawi signed a statement against a previous Columbia Vice President (presently Chancellor of the University of California at Berkeley) for having questioned the continuous BDS onslaught at Columbia.

Columbia always enlarges its anti-Israel departments with more notorious Jew haters. Rashid Khalidi was reported to have been a spokesperson for the PLO and taught that noted terror organizations Hezbollah and Hamas were not direct threats to the United States. Hamid Dabashi equates Israel with Nazis and ISIS. Timothy Mitchell signed a Columbia University divestment petition against Israel for apartheid. Ms. Gil Hachberg espouses constant coordinated Zionist attacks on Palestinian villages in order to judaize the country in a campaign of genocide. Mahmood Mamdani shouts for the dismantling of Israel because there should be no state for Jews. He teaches that Zionists derived their inspiration from the American cleansing of Native Americans. Ongoing perversion of history and religion, and the inflammatory, incendiary pseudo-Nazi words and actions from Jew-hating faculty and students alike escalate. Nevertheless, few purported human rights organizations join in the protest.

It is apparent that the public wounds inflicted weekly on Columbia’s Jews do not affect the well-funded and high salaried innumerable Jewish assistance entities. Columbia’s own Hillel, whether, national or resident, was notably absent. Yet, Blacks and Jews in Conversation, Inc., partnered successfully and nationally for eight years with dozens of university student associations together with the Anti-Defamation League (ADL), and the New York Urban League. The ADL was formed just for this purpose of safeguarding Jews, after a lynching of an innocent Jewish businessman in the Atlanta of the 1900s. Not even “Aryeh,” allegedly the largest pro-Israeli organization at Columbia, attended, endorsed, or encouraged anyone to join fellow Jewish students crying for help.

The America Israel Friendship League would have been present, but for the tragic, premature passing of its Director, William Behrer III. Bill previously supported pro-Israeli diverse panels of judges, experts and teachers in conducting successful multicultural dialogues at all levels of education. A charismatic, religious Christian, he put together distinguished colleagues and students of all backgrounds. Bill was a caring leader who could empower the measures necessary to protect Israeli and Jewish students. He would especially have come to the aid of his dear friend, Consul Dayan. Also prematurely past, was the ultimate caregiver and successful dialogue maker, Jerome Hornblass. Together with Ravi Batra, Esq., Columbia alumnus Judge Phyllis Gangel-Jacob and Judge Milton Tingling (elected to New York County Clerk), they dialogued with hundreds of diverse Columbia students, including the Jewish, Hispanic and Black Student Unions. The venue they recieved was adjacent to a deep long hole in the ground, where they were told a bomb from the 1960s took out a building. Blacks and Jews in Conversation, Inc., (BJC) encountered no protests or threats, and enjoyed a calm, conducive and honest education including Israel. BJC remains chaired by the Hon. William Thompson Sr, (App.Div., 2nd Dep’t. ret.), who led many Annual Missions, comprised of dozens of State and Federal Jurists to Israel. All were treated to in-depth and uncensored observations of all communities and laws and came back with glowing reports, including of the beauty and justice in Israel.

Today, we seem to lack courageous committed teachers who encourage students instead of instilling in them a causeless hatred for Jews and Israel. Rabbi Shmuley Boteach and Professor Alan Dershowitz can’t do it alone. The Alma Mater, Tufts University, just descended from offering the only course of “Anti-Zionism” in the country in the 1970’s to introducing “Colonizing Palestine,” despite massive protest. Enrolling in the anti-Israel course in order to successfully rebut the cheap, vicious, Jew hating propaganda; in class, one could bring in his own speakers (radio host Rabbi Aryeh Gottlieb of Paramus) and debate Professor Noam Chomsky in his younger although equally self-hating days. Years later, Columbia Political Science Professor Edward Said was debated, who began the unopposed buildup of an Israel hating faculty in his department. Although Tufts did not feature the arch Jewish-Genocide denier and promoter, Ahmadinejad, as did Columbia’s president; Tufts somehow became the national center for pseudo-Nazi pro-PLO terror promoting conferences. Judicial seminars were created for Tufts with African American (Hon. Milton Tingling) and Jewish (Southern Dis’t. Judge Harold Bayer, Jr.) jurists, devoted to resolution of cultural conflicts on campus, and praised by Tufts’ students’ press and faculty. There was no possibility of the present chaos of causeless hatred towards Jews. No wonder that the Director of Hillel, Natalie Segev, at John Jay College of Criminal Justice, where for years judicial seminars were created of and for all backgrounds, today feels vulnerable to continuous assaults, isolation, intimidation and hacking. Thanks to Professor Alan Schramm, forensic psychologist, BJC presented at John Jay and on JBSTV, IDF General Bentzi Gruber. He demonstrated the unequaled ethics governing the IDF in Gaza where he commanded 20,000 troops. The widely publicized presentation of a fair understanding of reality drew no protest and garnered Hillel Directors from CUNY. Major Gruber successfully introduced himself years ago to BJC’s monthly series at Stuyvesant High School, for Black History Month. He addressed polite questions from 200 high school students of all backgrounds delving into his slide show of necessary IDF defensive engagements.

Michael Taylor, is a 96-year old decorated veteran of four armies and two wars. He is a Holocaust survivor who saved at least 50 inmates from France’s Rivesaltes Concentration Camp. He fought for years as the youngest member of the Jewish French Underground near Lyon’s Gestapo Headquarters. He derailed Nazi resupply trains of anti-aircraft cannon and armored vehicles after D-Day. He liberated three French Towns with the captured Nazi vehicles. He rescued his three surviving orphaned sisters, all under the age of twelve under the protection of Catholic Schools during WWII. As an Officer of the French and American Armies, he brought them safely and legally to Israel. In Israel, they defended their Independence against seven invading Arab Armies. Michael is an Israeli and an American who saved countless lives and addresses forums everywhere as to the true history and meaning of Jewish defensive war as opposed to terror.

Please be on guard for October 30th, 2018, when “Visualizing Palestine” is being presented as the next anti-Jewish event at Columbia. We must all coordinate a united strategy not to realize this nightmare. We must instead expose fraud and imminent dangers. We must come to the aid of Jews on colleges before they either cannot enter as in Nazi Germany, or are forcibly converted to accept falsehoods and Israeli demonizations.