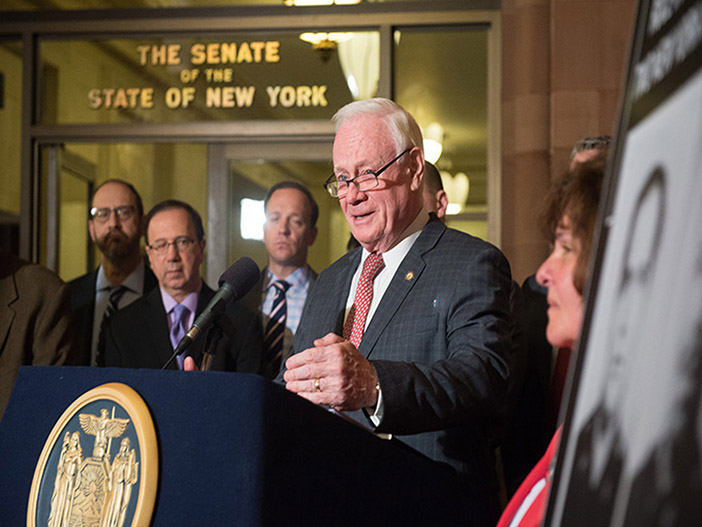 Governor Andrew Cuomo has joined the Democratic Blue Wave, which is trying to unseat Republican State Sen. Martin J. Golden. “We are going to take the last Republican senator out of Brooklyn this election,” said the governor at a rally Tuesday night in Bensonhurst. As of January 2018, Golden is the only Republican State Senator from Brooklyn, and one of only three Republican elected officials representing Brooklyn. The governor, who has in the past rarely showed interest in State Senate elections, endorsed Democratic Andrew Gounardes, for the south Brooklyn district covering Bay Ridge, as reported by NY1. “I need Sen. Gounardes in Albany. I need him,” said Gov. Cuomo. “He is smart, he gets it, he works hard, he knows the district, he will represent you.”

Golden, the 68-year-old Republican, who is running for re-election in the 22nd Senate District on Nov. 6, seemed unfazed and confident. He told the Brooklyn Eagle that voters in his district make their decisions based not on political party but rather on the candidate’s record. “I am out there on a regular basis. People know me,” said Golden, who previously served on the City Council and was also a former police officer.

While the number of registered Democrats in Brooklyn is close to double that of registered Republicans in the district, Golden has had no trouble at the polls in the past. Since his first victory in 2002, he has won re-election every two years. He is now running for his ninth term.

Still, Golden says he is taking the election seriously. “I take nothing for granted,” he said. Gounardes, who is a lawyer, was close to unseating him in the 2012 election. Further, Gounardes, who serves as chief counsel to Brooklyn Borough President Eric Adams, has the strong backing of nearly the entire Democratic Party.

“Make no mistake about it: There is a lot more work to do here to make a difference in the lives of our neighbors, our community members, our coworkers, our families, our friends — everyone here in our communities,” said Gounardes, during Tuesday’s rally.