Ben Shapiro Triumphs on Fox TV; Ratings Through the Roof - The Jewish Voice

Ben Shapiro Triumphs on Fox TV; Ratings Through the Roof 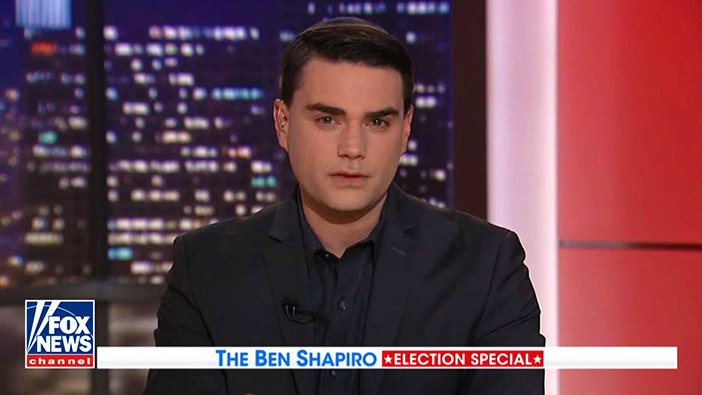 New Exhibit, “The Holocaust: What Hate Can Do” Opens at NYC’s Museum of Jewish Heritage

Daily Wire Editor-in-Chief Ben Shapiro knocked out the competition in ratings during his second Fox News episode of “The Ben Shapiro Election Special” a few weeks ago, beating both CNN and MSNBC combined during the show’s time slot.

Shapiro’s show was the highest rated cable news program in the 8 p.m. EST time slot in both total viewers and the 25-54 demographic and beat CNN and MSNBC combined in both categories. Ratings from Nielsen Media Research for the 8 p.m. EST hour on Sunday:

The show was also the second highest rated cable news program in both categories on Sunday, with Fox News’ “The Next Revolution” with Steve Hilton edging Shapiro out in total viewers with 1,821,000 and Fox News’ Maria Bartiromo edging out Shapiro in the 25-54 demographic with 327,000 viewers.

Shapiro was hired by Creators Syndicate at age 17 to become the youngest nationally syndicated columnist in the U.S. He earned a BA in Political Science from UCLA in 2004 and graduated from Harvard Law School in 2007. After working as an attorney for Goodwin Procter LLP, Shapiro began his own legal consulting firm, Benjamin Shapiro Legal Consulting (Los Angeles).

Shapiro’s columns are printed in major newspapers and websites including Townhall, ABCNews, WorldNet Daily, Human Events, FrontPage Mag, Family Security Matters, the Riverside Press-Enterprise and the Conservative Chronicle. His columns have also appeared in the Christian Science Monitor, Chicago Sun-Times, Orlando Sentinel, Honolulu Star-Advertiser, RealClearPolitics.com, Arizona Republic, and Claremont Review of Books, among others. He has been the subject of articles in the Wall Street Journal, the New York Times, Associated Press, and Christian Science Monitor, and quoted on “The Rush Limbaugh Show,” “The Dr. Laura Show,” at CBS News, in the New York Press, in the The Washington Times, and in The American Conservative magazine, among many others.

Since he began writing his first book, Brainwashed: How Universities Indoctrinate America’s Youth (2004), Shapiro has frequently addressed the issue of the Left’s ideological stranglehold on academia and has worked to push back against that trend through fact and logic-based speeches and debates. “Facts don’t care about your feelings,” has become one of Ben Shapiro’s trademark lines. He has appeared as the featured speaker at many conservative events on campuses nationwide, several of those appearances targeted by progressive and “Antifa” activists.

Shapiro, an Orthodox Jew, has also worked to expose the anti-Israel and anti-Semitic motivations behind the Boycott, Divestment and Sanctions movement.