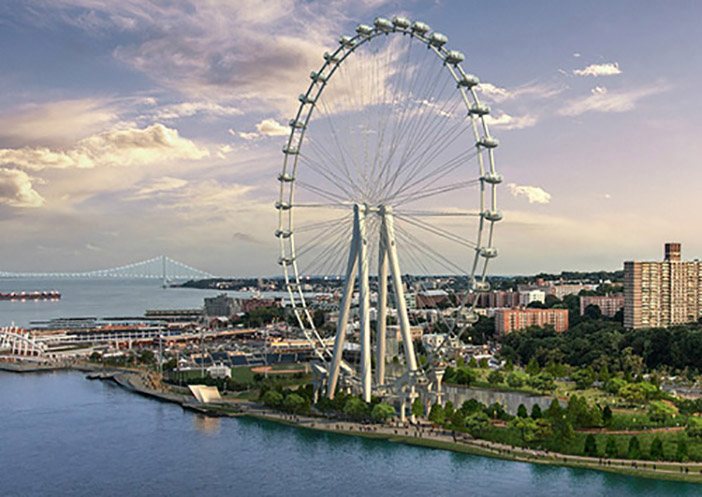 The giant Ferris wheel project which has been trying to get off the ground since 2012, may soon end up forgotten and buried.

The de Blasio administration has decided not to help finance the giant Ferris wheel planned for Staten Island, meaning the developers must fund the pricey project entirely with private money or forfeit the right to build, Crain’s reported.

“Despite many recent conversations with the wheel developer, we remain convinced that public funds are too scarce and valuable to be leveraged for this venture,” an Economic Development Corp. spokesman said in a statement. “If the developer can identify private funds to finish the project, we remain supportive.”

The project, originally budgeted at $230 million, has been repeatedly stalled due cost overruns, delays and disputes between investors. Work on the New York Wheel stopped completely May of 2017 when the main contractor on halted work and was fired, The Jewish Voice previously reported.

The city believes the project is too risky mainly because there is no guarantee that the ridership will generate enough income to pay off the debt associated with the project. It is currently estimated as a costly project at around $590 million.

The Jewish Voice reported in November of 2017, that brave plans to build the world’s tallest Ferris wheel in the North Shore of Staten Island were expected to help turn the St. George Ferry Terminal into a bustling tourist destination, however the price tag for this huge development kept rising. TVJ reported that the project had run into unexpected expenditures which are common for an endeavor of its size. Then a dispute between dispute with the wheel’s former contractor, Mammoet-Starneth, ground the project to a halt and bled into a Delaware bankruptcy court.

The developers said in a statement they are still committed to pursuing the project, and that the city’s statement took them off guard, according to Crain’s.

“The New York Wheel developers were disappointed and surprised by EDC’s definitive statement about the wheel’s proposed finance plan,” a spokeswoman of New York Wheel LLC said in a statement.

The proposal got a glimmer of hope in May when New York Wheel LLC, the company behind the project, reached an agreement with the contractor, Mammoet-Starneth, to resolve some of their legal disputes. The City completely backing out is now the biggest setback yet, after months of legal wrangling with Mammoet-Starneth.

New York Wheel is still in negotiations with its former contractor over pieces of the wheel that are being stored in Brooklyn. Mammoet-Starneth walked off the job last year and later filed for bankruptcy.

The firm wanted to auction off pieces of the wheel as part of its liquidation process, but agreed not to do this as the developers agreed to help pay for the storage costs