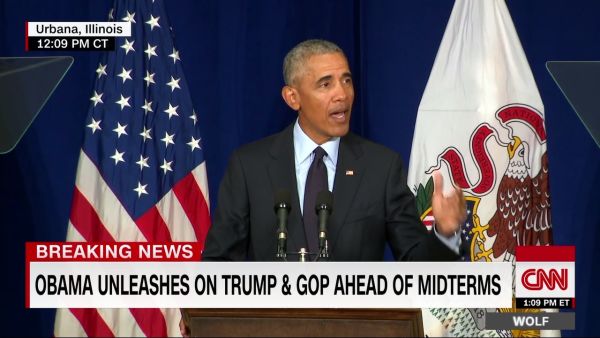 In a serious rebuke to the Trump administration, former President Barack Obama, who has maintained a low public profile since leaving office, entered the midterm election battle Friday with a simple message: “You need to vote because our democracy depends on it.”

“A glance at recent headlines should tell you that this moment really is different. The stakes really are higher. The consequences of any of us sitting on the sidelines are more dire,” Obama told students at the University of Illinois-Urbana Champaign, where he accepted an ethics in government award.

In keeping with tradition, Obama has been reluctant to publicly comment on his successor, despite the fact Trump was a frequent critic of Obama.

The former president said the current state of Washington politics “did not start with Donald Trump. He is a symptom, not the cause. He’s just capitalizing on resentments that politicians have been fanning for years. A fear and anger that’s rooted in our past but is also born out of the enormous upheavals that have taken place in your brief lifetimes.”

Obama also said standing up to discrimination should be a bipartisan effort, adding “How hard can that be, saying that Nazis are bad?”

“It shouldn’t be Democratic or Republican to say that we don’t target groups of people because of what they look like or how they pray,” Obama said. “We are supposed to stand up to discrimination and we are sure as heck to stand up clearly and unequivocally to Nazi sympathizers.”

According to a CNN report, in his remarks, Obama highlighted the anonymous op-ed in The New York Times this week, published by a Senior Administration Official.

“And by the way the idea that everything will turn out OK because there are people inside the White House who secretly aren’t following the President’s orders,” he said. “That is not a check. I am being serious here. That is not how our democracy is supposed to work.”

Obama also spent a sizable portion of his remarks criticizing Republicans in Congress, saying “the politics of resentment and paranoia has unfortunately found a home in the Republican party” over the last few decades and argued that the policies GOP leaders are pursuing aren’t conservative.

Obama also implored the students “to show up” at the polls in November, noting that only one in five young eligible voters cast ballots in the 2016 presidential election.

“This whole project of self-government only works if everybody’s doing their part. Don’t tell me your vote doesn’t matter,” he declared.

Obama’s appearance at the central Illinois university campus was the first of several campaign events in the coming weeks at which he will urge Democratic voters to cast ballots in November’s midterm elections to take control of Congress from Donald Trump’s Republican Party.

The former president also will attend a Southern California event for seven Democratic candidates for the House of Representatives in Republican-controlled districts that supported Democratic presidential nominee Hillary Clinton over Trump two years ago.

He will return to Illinois later this month and then appear in Pennsylvania, a key state that Democrats hope will help deliver the 23 seats needed to regain control of the House and stop the advancement of Trump’s agenda.

The Democratic and Republican parties have traditionally experienced sharp declines in voter turnout in non-presidential elections. But the November 6 election is widely perceived as a referendum on Trump, who regularly touts his accomplishments such as tax cuts and deregulation. However, a widening investigation into Russia’s interference in the 2016 election that Trump won and more frequent questions about his fitness for office have cast a pall over his presidency.