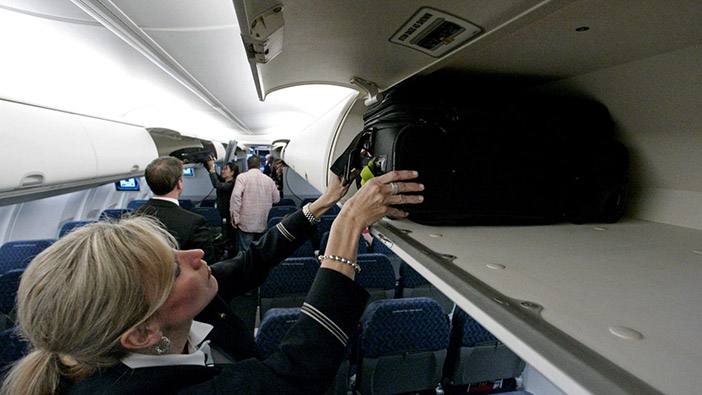 Delta Airlines Inc, passengers should get ready to bring a fatter wallet to the airport check-in line because the second-largest airline in the country is joining others in raising the price of checked bags to $30 for domestic flights, Vos Iz Neias reports.

United Continental Holdings Inc did something similar along with JetBlue Airways Corp by raising baggage fees. Congress is already looking into whether the U.S. Transportation Department can determine if certain airline fees are “reasonable and proportional.”

Delta, United and JetBlue will hit passengers with a $30 fee for the first checked bag on domestic flights, with second bags also costing $5 more than before, at a cost now of $40, meaning the total cost for the two bags would be $70 for a one-way flight.

The airlines are trying to skirt the blame by claiming that costs are going up, especially the cost of fuel and pay raises to staff, and saying that they have their hands forced here in having to raise the baggage fees.

U.S. airlines’ make good money from these baggage fees, taking in $5.7 billion in 2010 for these fees and reservation change fees. In only seven years, the airlines now make $7.5 billion off of these fees.

United Chief Executive Oscar Munoz specifically came out to speak in favor of these price increases. He said it was okay because they hadn’t raised the fares in eight years. He said that the airline wants to invest in some of their operations.

U.S. House of Representatives and Senate negotiators need to make sure Congress can pass a bill in time for a Sept. 30 deadline that will allow the operating authority of the FAA to continue.

Back in the spring, the U.S. Transportation Department did not like some things in a bill approved by the Senate Commerce Committee that could bring back some regulations that have not been seen in a few decades.

American Airlines Group Inc Chief Executive Doug Parker said the airline would probably stop offering non-refundable tickets if Congress interfered with the airlines’ abilities to charge certain fees. “That’s where I think we would end up,” he said.

Back in 2015, the Jewish Voice reported about how Jetblue was finally giving in and ending its holdout on bag fees.

The airline announced its change back in November of 2015, leaving Southwest Airlines as the only major U.S. carrier not to charge a bag fee.

“The airline plans to reinvest the millions of dollars it will collect from bag fees into new seats and TVs, said Marty St. George, JetBlue’s executive vice president of commercial products and planning according to Mayerowitz.