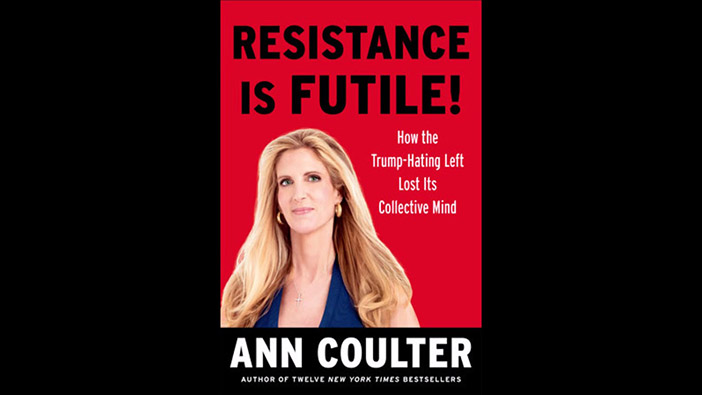 You want evidence of Justice Department and media corruption? Coulter’s got the goods – in spades – and served with her signature rapier wit. Resistance Is Futile doesn’t simply rehash talking points about Hillary’s serial lawbreaking, Mueller’s partisan probe, or Deep State subversion of an opposition president, though all those matters are treated with lawyerly and comedic deftness. (Think My Cousin Vinny.) First and foremost, Coulter’s book is about collusion – the democracy-demolishing collusion between Democrats and the mainstream media that has existed for decades but that a white-hot hatred for the “vulgarian” Trump has made unmistakably clear to most Americans. On the bright side, this exposure is actually destroying journalism, which the author says must perish and be rebuilt on an ethical foundation for democracy to survive. Coulter provides a veritable avalanche of media inconsistencies, inaccuracies, and lost-their-mind absurdities to support her conclusion.

For example, Democrats and their media lackeys who only yesterday decried federal surveillance of possible terrorists, and who nearly defrocked John Brennan for lying to Sen. Dianne Feinstein about the CIA’s enhanced spying activity, now view that same man as a paragon of rectitude. Indeed, they regularly denounce as unpatriotic anyone who questions the validity of warrants obtained from a secret court to spy on Americans associated with the Trump campaign – even during the campaign! The same coterie of co-conspirators who were eager to vindicate Alger Hiss and praise cooperation with the Soviet Union now portray Putin’s Russia as the gravest threat to America since 9-11 or Pearl Harbor. According to these partisans, Putin must be publicly vilified and his country harshly punished for interfering with an American election via a few thousand Facebook ads – many supporting Trump, some supporting Bernie, others touting Ted Cruz, Jill Stein, Black Lives Matter, United Muslims of America, and even Hillary.

This breakdown comes from Mueller’s own indictment of the 13 villainous Russians he is clearly not anxious to see in court, having backed away from an expedited trial when one of the Russian ham sandwiches actually sent a legal team to the U.S. to have the charges against him adjudicated. One possibly exculpatory element of that defense would be the fact that most of the Facebook ads were placed after the election and even jumped on the Resistance bandwagon. Mueller, by the way, has the distinction of being FBI director during two of the bureau’s most famous screw-ups. First, Republican Senator Ted Stevens was falsely accused of lying to investigators (sound familiar?) eight days before an election he lost by less than 2 percent. When the trial judge discovered prosecutors had withheld vital exculpatory evidence, he threw out the case and demanded an investigation of the investigators.

Then there was the anthrax case, where Mueller worked “in lockstep” with his hand-chosen investigator, Richard Palmer. Together these vigilantes all but destroyed the life of Steven Hatfill, an innocent U.S. Army biodefense researcher whom the FBI hounded relentlessly for six years because he fit the bureau’s profile: “a ‘flag-waving’ patriot.” Even after a federal judge said the investigators hadn’t found “a scintilla of evidence” against Hatfill and the government later settled with Hatfill for almost six million dollars, Mueller said, “I do not apologize for any aspect of this investigation.” There you have the “honorable” Robert Mueller.

When it comes to immigration, the media’s “heads I win, tails you lose” reportage depends on who resides in the White House. While Obama lived there, federal law and even federal policy that ignored those laws ruled supreme. That’s what CNN’s law expert informed us of after Arizona vainly attempted to enforce federal immigration laws in 2010. But now that Trump’s address is 1600 Pennsylvania Avenue, it’s perfectly okay for blue states to ignore federal immigration law. Indeed, thanks to a few lower-court rulings cheered by mainstream media pundits, the president is now unable to exercise his “clear constitutional and federal authority” to “exclude immigrants in the best interests of the United States.”

NBC’s release of the embarrassing 2005 Access Hollywood tape just weeks before the November election provides yet another example of media partisanship. This electoral kill shot, according to Coulter, “breached all professional norms and probably the law.” By contrast, NBC’s current president, Andy Lack, when heading NBC News in 1999, “held the network’s interview with Juanita Broaddrick” in which she accused Bill Clinton of rape until after the president’s impeachment trial. In this case, timing says everything you need to know about Lack, NBC, partisanship, and a willingness to place more importance on a braggadocious utterance about consensual groping within a celebrity culture (“They let you do it,” Trump added.) than multiple accusations of actual predatory behavior by a Democrat.

Other matters diligently dissected by Coulter include Trump’s wildly mischaracterized Charlottesville statement, George Soros’s plundering of Russia and manipulation of foreign elections, the false claim that Trump asked Russia to “hack” Hillary’s private email server, the media’s misreporting about changes to the 2016 GOP platform in order to suggest Russian influence, and an honest comparison of Watergate with the Mueller probe. Concerning the last, Coulter comments, “Imagine what G. Gordon Liddy could have done working from the inside of the FBI, with FISA warrants and government-paid spies!”

Coulter offers these two summary judgments about the current special prosecutor’s investigation: “[t]he very nature of Mueller’s probe is Soviet justice. He has an open-ended commission to look for any crimes committed by anyone connected to the Trump campaign[.] … If the Russians were trying to sow discord and undermine confidence in our democracy, then the guy they probably colluded with was Robert Mueller.”

Despite her full-throated defense of the president against leftist and media insanity, Resistance Is Futile isn’t a Trump hagiography. Coulter describes the president as “utterly undisciplined” and “the crudest kind of braggart.” In Coulter’s estimation, however, these flaws pale when compared with Trump’s failure to achieve his primary campaign promise: stopping illegal immigration. Coulter ends her case with the less than sanguine hope that Trump may yet keep that promise, but also with the consolation that if he accomplishes nothing else, “at least the media will be totally discredited.”

In sum, if you seek a detailed eye- and ear-catching review of news stories that have been misreported, distorted, or conveniently ignored due to Trump Derangement Syndrome, Resistance Is Futile is the book for you.

Richard Kirk is a freelance writer living in Southern California whose book Moral Illiteracy: “Who’s to Say?” is also available on Kindle.