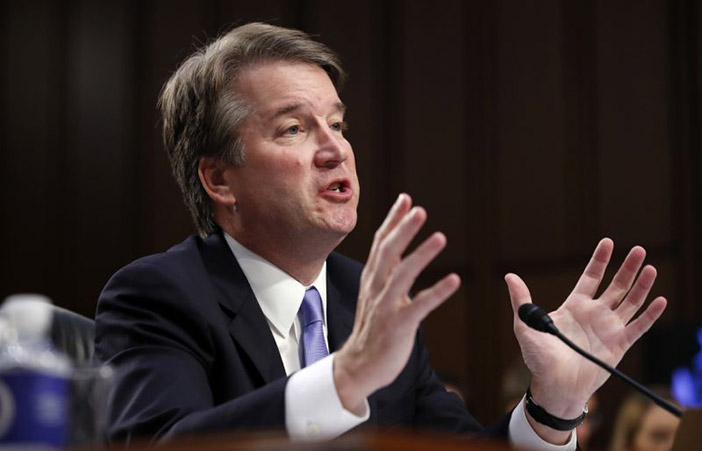 The woman who has accused Supreme Court nominee Brett Kavanaugh of sexual misconduct has come forward with her allegation.

Christine Blasey Ford, professor at Palo Alto University in California, told the Washington Post that she feared for her life during the attack.

“I thought he might inadvertently kill me,” Ford the newspaper in an interview published Sunday.

Ford said the incident took place at a party in Maryland in the 1980s when both she and Kavanaugh were in high school.

She said a Kavanaugh and a friend cornered her in a bedroom where Kavanaugh threw her down on a bed and tried to remove her clothes. She said both boys were “stumbling drunk.”

Kavanaugh has denied any wrongdoing.

“I categorically and unequivocally deny this allegation,” he said in a statement last week. “I did not do this back in high school ore at anytime. ”

Ford says she didn’t talk about the incident until a couples therapy session with her husband in 2012.

Democratic lawmakers have voiced doubt the allegation will derail the nomination.

But Senator Dianne Feinstein, the senior Democrat on the Judiciary Committee said Kavanaugh’s nomination process should be put on hold until the FBI completes its investigation of the allegation.

“I support Mrs. Ford’s decision to share her story, and now that she has, it is in the hands of the FBI to conduct an investigation. This should happen before the Senate moves forward on this nominee,” Feinstein said in a statement released Sunday.

Senate Minority Leader Chuck Schumer also called for a delay in the confirmation process while Ford’s allegations are investigated.

“To railroad a vote now would be an insult to the women of America and the integrity of the Supreme Court,” he said in a statement.

The Washington Post reports that Republicans on the Senate Judiciary Committee indicated Sunday that they would move forward with a vote on Kavanaugh’s confirmation this week.

With such bold allegations coming at the last minute during an important confirmation process, naturally such an event should sharply draw everyone’s attention, but the situation makes it complicated to reveal the details. Feinstein wants to help keep the woman who made the accusations anonymous, including not getting into specifics about the situation.

Through media reports that were able to obtain scant information from sources, like The New York Times and The Intercept, some of the letter’s contents have been revealed.

“I have received information from an individual concerning the nomination of Brett Kavanaugh to the Supreme Court,” Feinstein said in a statement.

“That individual strongly requested confidentiality, declined to come forward or press the matter further, and I have honored that decision. I have, however, referred the matter to federal investigative authorities.”

According to reporting by CNN last Thursday, the Federal Bureau of Investigations said that Kavanaugh will not be investigated for anything stemming from the letter.

Adding to the drama is the curiosity created by the fact that Feinstein sat on the information since the summer and then dropped it at the last minute. California Democratic Rep. Anna Eshoo’s office received a letter regarding the allegations, which were then shared and handed over to Feinstein.

The White House didn’t waste any time in striking back with its own response, making sure to call out the leader of the Democrats in the senate.

“Senator Schumer promised to ‘oppose Judge Kavanaugh’s nomination with everything I have,’ and it appears he is delivering with this 11th hour attempt to delay his confirmation,” the statement said, which went on to defend the president’s court nominee.