Jerusalem College of Technology Cultivates Young Leadership in US 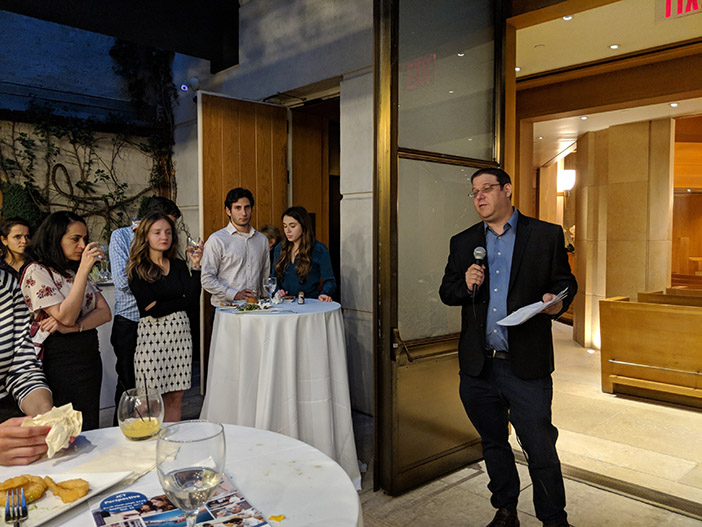 Approximately 75 young professionals gathered in Manhattan on August 23 to network and to learn more about the trailblazing work of the Jerusalem College of Technology (JCT) in an evening organized by the recently launched Young Leadership of Friends of JCT group.

The young leadership initiative was initiated around the time of Friends of JCT’s New York City gala dinner this past May, which featured a keynote address from “Big Bang Theory” star actress and real-life neuroscientist Mayim Bialik. Thanks to the young leadership effort, the annual gala had a higher-than-usual turnout of young professionals as well as attendees hearing about JCT for the first time.

Now, Friends of JCT’s young leadership arm is a more formal group which mostly draws young professionals from New York neighborhoods such as Riverdale and the Upper West Side who work to spread the word about the key academic, technological, and socioeconomic components of the Israeli university’s mission. Last week’s cocktails and hors d’oeuvres event at Congregation Beit Edmond included a presentation by David Sinefeld, a JCT alum and postdoctoral researcher in neurotech at Cornell University who is returning to JCT to teach at its Tal Campus this fall. Sinefeld spoke about the importance of JCT’s dual focus on Torah and science.

“It was fantastic to see so many people come out for this first Young Leadership event,” said Joel Strauss, a member of the Friends of JCT Board of Directors who helped organize the Young Leadership division. “I know several of the attendees were so moved by the message about how JCT is transforming lives in Israel that they have already reached out to see how they can get more involved.”

In addition to educating some of Israel’s top students, JCT empowers diverse segments of Israeli society to become productive members of the country’s workforce, including many who would otherwise not have the opportunity to pursue academic studies. Over 24 percent of JCT’s students come from Israel’s periphery and 20 percent are new immigrants. There are more than 2,000 Haredi men and women studying among JCT’s student body of 4,500. While about 50 percent of Haredi men in the country were employed by the end of 2017, JCT’s Haredi graduates attain an 89-percent employment rate, including 77 percent in their field of choice.

JCT is also a key driver of women’s empowerment in the science and technology sectors. The college trains 20 percent of Israel’s women engineers. One out of every five Israeli women studying computer science and/or software engineering does so at JCT, and 53 percent of the school’s computer science students are women—18 percent higher than any other Israeli university.

Further, JCT plays a leading role in developing Israel’s overall economic infrastructure and that of Jerusalem in particular. JCT alumni and faculty have established more than 100 high-tech companies, including some of Jerusalem’s most successful start-ups.

Teaneck, N.J. native and Barnard College graduate Rebecca Rubin, one of the organizers of the August 23 Young Leadership of Friends of JCT event, draws a parallel between the women’s campus at Barnard and the empowerment of women at JCT.

“Barnard is a women’s college with an incredible environment of highly educated, bold women that allowed me to thrive and to gain the confidence I needed to be successful in my career, At JCT, religious women and all women have the ability to learn and to work with people in a safe space, a safe environment, and to expand and grow their skills there. The mission really resonates with me,” Rubin said.

Rubin, whose husband Michael studied in JCT’s International Program in English during his gap year, first become involved with Friends of JCT when she helped organize a March 2016 event focusing on women in technology that drew 500 people. Now an MBA student at Cornell Tech, she worked in Product Management in New York City’s start-up scene and is accustomed to being “the only woman in a room full of men,” such as engineers.

“JCT’s mission resonates with me because the college trains women to be confident, capable leaders in tech, particularly women from traditionally marginalized groups in Israeli society like the Ethiopian, Arab, and Haredi communities,” Rubin said. “I want to make sure that Israel is set up for success going forward. There are many tech jobs in Israel that can’t be filled because potential employees don’t have the right skill set, and JCT is working to close that gap by training professionals from diverse segments of Israeli society.”