Hoping to Save His Own Life, Man Designs New Surgical Tool 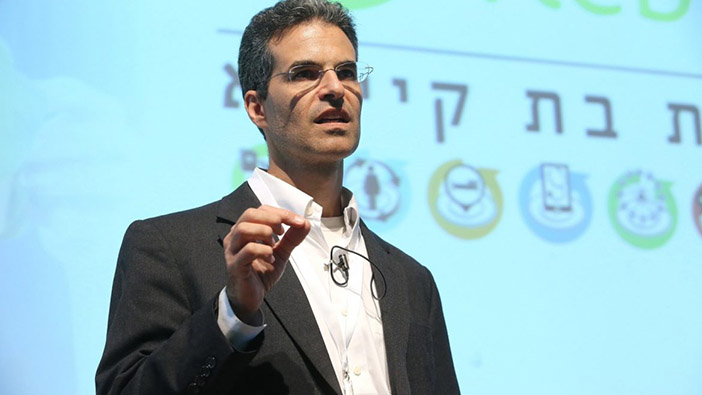 Study: Extensive Use of Smartphones by Parents Could Hamper Toddler Development

If you’re an Israeli entrepreneur and you’re facing a life-threatening disease with no cure, what do you do? For Avi Yaron, the choice was clear: he’d invent one.

Now, 20 years after he was diagnosed with what his doctors told him was an inoperable brain tumor, Visionsense, the company Yaron founded to make possible the kind of surgery he needed, was sold this year to US medical equipment company Medtronic for $75 million. That’s a tidy premium over the $20 million invested in the company over the past two decades.

It almost didn’t happen, Yaron tells ISRAEL21c. “Investors would say to me, politely and with all due respect, you have a ticking time bomb in your brain. Even the best surgeons can’t remove it. And you want us to invest in you?”

Yaron was 26 years old when in 1993 his motorcycle crashed and he was rushed to the hospital. While in the MRI machine to check for damage, the doctors discovered something far worse: a tumor smack dab in the middle of his brain.

“Avi, you’ll survive,” the doctors told Yaron. “But you need immediate surgery, after which you’ll probably end up handicapped, paralyzed on one side, you’ll suffer from cognitive dysfunction and you might have epilepsy, too.”

Yaron, then an electrical engineering student, was floored. “Before that, I had been healthy, active, high on life,” he says. “I refused the surgery. I don’t know if it was amazing intuition or pure denial, but that decision saved my life.”

Yaron began learning as much as he could about his condition. He studied chemistry and anatomy. He researched what technologies were available and interviewed doctors around the world – in Israel, Europe and the United States.

He eventually found a physician in New York who was able to remove the tumor. “I felt an amazing sense of victory,” he says. “I defeated the tumor!”

But the doctor wasn’t able to get it all, and gradually the tumor started to grow again. There was nothing else his doctor could do – existing endoscopes (the surgical tool used to guide doctors in minimally invasive surgeries) lacked the 3D depth perception required.

“Maybe someone will invent a tiny stereoscopic camera in the next five years,” Yaron’s doctor told him. “For now, it’s fortunate that your tumor is growing slowly.”

It was small consolation. Yaron didn’t want to become what he dubbed “a zipper where every few years my brain would be opened, cleaned and closed.” So he set out to concoct the very technology he needed.

His big idea: instead of the kind of opto-mechanics used in traditional endoscopes, he’d base his invention on a small silicon chip and software algorithms. His design mimicked an insect’s eyes, with each side operating independently to create the 3D vision.

Yaron launched Visionsense in 1998. It took another two years to get to a prototype and another 10 to create a commercial product. But the product has now been adopted by surgeons around the world and the company has been growing steadily.

So why sell to Medtronic?

“My dream as a Zionist was to grow Visionsense into a multinational global company like Nokia or Phillips,” Yaron tells ISRAEL21c.

Yet, the $20 million raised from investors including Lewis Pell, Star Ventures, Peregrine Ventures and the Glenrock Fund was just not enough. At the time of the acquisition, Visionsense had a staff of about 20, with research and development in Israel and headquarters in the US.

As part of Medtronic, though, “Visionsense will be able to leverage Medtronic’s global sales and marketing capability,” Yaron says. “It’s phenomenal.”

Medtronic is no stranger to Israel. The company, which employs 85,000 people worldwide and has a market capitalization of $100 billion, has made nine investments in Israeli medical tech over the past 13 years.

Yaron left Visionsense in 2013 after hiring Alex Chanin as the company’s US-based CEO. The decision was both professional and personal.

Yaron says he knew a seasoned executive like Chanin would help ensure that Visionsense could execute its mission of saving lives. At the same time, Yaron, who had relocated along with his family to the US when he served as the company’s CEO, was itching to go home to Israel.

Plus, he had a new dream – to take a leap into the burgeoning business of “neurowellness.”

During the course of his own illness, Yaron became convinced that Western medicine “disregards the emotional aspect” and that patients “who manage their anxiety and stress live longer with improved health.” The future of medicine, he says, is in “developing predictive, preventative systems based on emotional factors. That’s my challenge now.”

Yaron today is 51 and healthy. In the end, it was not his company’s technology that removed the final bits of resistant tumors in his brain, but an additional three surgeries in three different countries: Germany, Israel and New York.

If Visionsense had developed its VSiii 3D camera system before then, those surgeries would undoubtedly have been more straightforward, safer and with a greatly reduced recovery time.

While Yaron hasn’t stopped innovating, he has found time to volunteer, coaching other patients with brain tumors. While he doesn’t give medical advice, his condition taught him “a lot about humility,” he says. “I’m here to serve.”