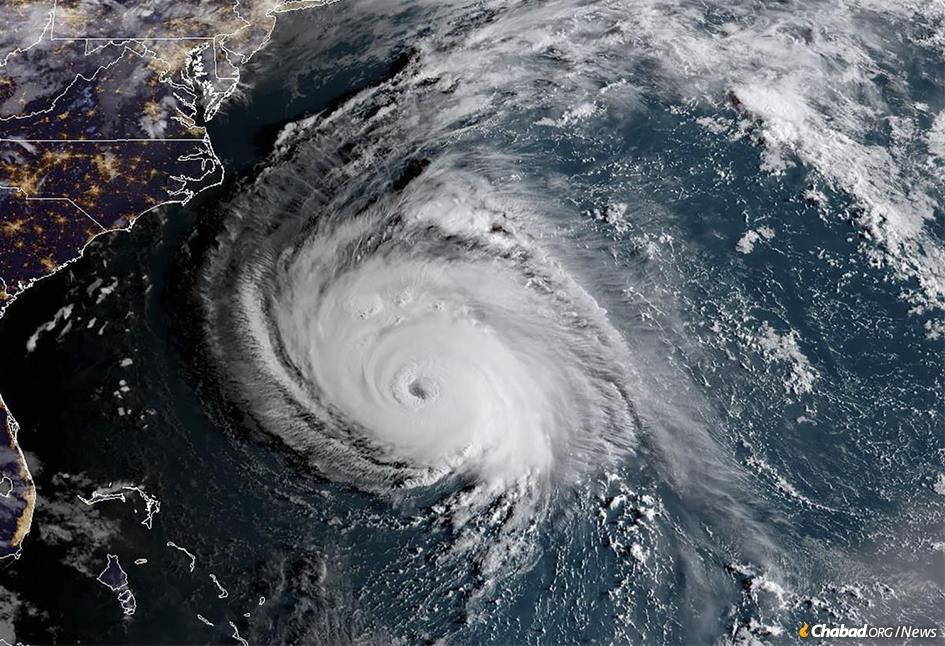 For the last 11 years, the Lieblich family of Wilmington, N.C., have always held Rosh Hashanah services on both days of the holiday.

This year, for the first time ever, they did not have a minyan for the second day because of a looming catastrophic weather threat: Hurricane Florence, which is expected to make landfall and then stall along the South Carolina coast starting on Friday, bringing with it massive storm surges and as much as 30 inches of rain.

“There’s a sense of urgency here that I haven’t felt before,” said Rabbi Moshe Lieblich, co-director of Chabad of Wilmington with his wife, Chana. “People are scared. Some have been crying. On the first day of Rosh Hashanah, people were adamant that they were going to stay in their homes, but by the second day, they had changed their mind.”

“It seems the whole Wilmington is shut down,” he recounted. “Ninety-five percent of stores are closed. Only a handful of gas stations have gas. I need propane for our generator and had to go to seven or eight places before I could get any.”

Warnings about Hurricane Florence, which is currently 400 miles wide and a Category 3 storm with 125 miles per hour winds, included words like “catastrophic” and “life-threatening.” Throughout the region, Chabad-Lubavitch centers outside the range of the storm began preparing to help victims in every way. Just one year ago, Chabad brought relief to the victims of Hurricane Harvey, trucking in supplies as 50 rabbis from a dozen states joined the clean-up and aid efforts. Soon after, Hurricanes Irma and Maria cut a swath of devastation through the Caribbean islands and the southeastern United States. In the Virgin Islands, Puerto Rico and the Florida Keys, Chabad emissaries picked up the pieces, organizing much-needed relief efforts and leading High Holidays services in the most trying of circumstances.

As North Carolina Gov. Roy Cooper warned about this year’s first major hurricane: “Disaster is on the doorstep, and it’s coming in.”

North Carolina isn’t alone in its preparations. South Carolinians are also getting ready for the worst. In Charleston, the full supply of more than 53,000 sandbags were distributed and there are no more to be had, and flights will end at Charleston International Airport beginning at midnight on Wednesday and into Thursday.

In the coastal, tourist town of Myrtle Beach, S.C., where there are mandatory evacuation orders in place, the Aizenman family was preparing on Wednesday to leave their home and head inland to ride out the storm with family members. They will be taking with them the community’s five Torah scrolls.

Rabbi Doron Aizenman, director of Chabad of Myrtle Beach with his wife, Leah, noted that everything in the town is closed—the shops, the businesses and the schools, including the Chabad Jewish Academy. They said they will be keeping in touch with congregants as the storm develops.

“We just installed new windows and a new roof, and it’s a strong structure, so we are hopeful there won’t be any damage,” he said, noting that “20 years ago, we had a roof fall off when we were in the middle of Shabbat prayers during another hurricane, but since then the roof has been sturdy and we’ve had other storms.”

Though still a week away, he said, many people are already making alternate plans for Yom Kippur in case they can’t return to spend it with Chabad of Myrtle Beach.

One thing Aizenman hopes won’t need to be changed because of the storm is a fundraising initiative for a new mikvah that is set to kick off on Sunday and run through the eve of Yom Kippur. “Hopefully, we will have electricity and be able to go ahead with it.”

As for the Lieblich family in Wilmington, they plan to stay in place, but are keeping their eyes on the local forecasts and will adjust plans if needed.

Said Rabbi Lieblich: “We have a job to do, and as long as people are here and we can help out, if it’s safe to do so, we will be there.” (Chabad.org)