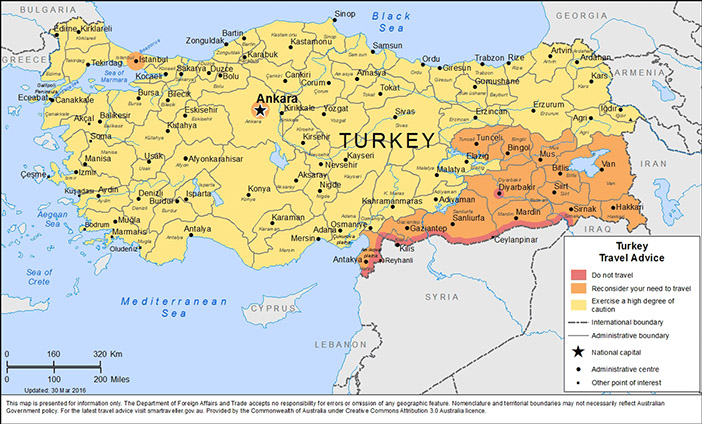 Tracing the History of Tel Aviv Through its Street Names

Turkey boasts ancient history and landscapes that would make it a great place for a faraway getaway. Turkey would be a great destination if it wasn’t currently experiencing the turmoil plaguing the nation, making it an area to avoid at nearly all costs right now. Governments have long issued travel advisories for its citizens wishing to explore Turkey, and as of June 28, The U.S. State Department considers Turkey a Level 3 threat, meaning people should “reconsider travel,” with some areas even reaching a Level 4 threat.

The department, more specifically its Bureau of Consular Affairs travel division, warns Americans not to go to areas along the Turkey-Syria border and the southeastern provinces of Hatay, Kilis, Gaziantep, Sanliurfa, Sirnak, Diyarbakir, Van, Siirt, Mus, Mardin, Batman, Bingol, Tunceli, Hakkari, and Bitlis because of terrorism. The State Department classifies those areas as Level 4 threats.

Security forces have used the declared State of Emergency to detain tens of thousands of individuals, including U.S. citizens, who they claim are linked to terrorist organizations based on scant or secret evidence in instances that appear to be politically motivated. U.S. citizens have also been subject to travel bans that prevent them from departing Turkey.

Those warnings are particularly eerie when thinking of the American pastor, Andrew Brunson, who’s been in the news over the past few months for being imprisoned in Turkey and charged with bogus crimes. It’s also fitting of a country run by President Recep Tayyip Erdoğan, who’s much more of an autocrat than a democratic president.

Americans who participate in any displays or events not sanctioned by the government of Turkey could find themselves arrested.

Any Americans considering traveling to Turkey should read the Safety and Security section on Turkey’s information page.

Those who do still travel to Turkey can at least try staying alert in locations that are popular with Westerners and therefore more subject to terrorism. Stay at hotels with identifiable security measures and avoid crowds and demonstrations.

Monitor local media and make adjustments to plans as necessary because anything can happen, especially considering that a coup was attempted in 2016. People can sign up for the Smart Traveler Enrollment Program to receive alerts and make it easier to locate you in an emergency, something which would be good for anyone to do regardless of desire to travel to dangerous places.

U.S. citizens who travel abroad need to be prepared and planned for emergencies and use all the resources that the State Department has to offer to use as aides for creating plans.

The U.S. government has very limited ability to provide emergency services to U.S. citizens traveling in southeastern Turkey because the government won’t let its employees travel to that area.