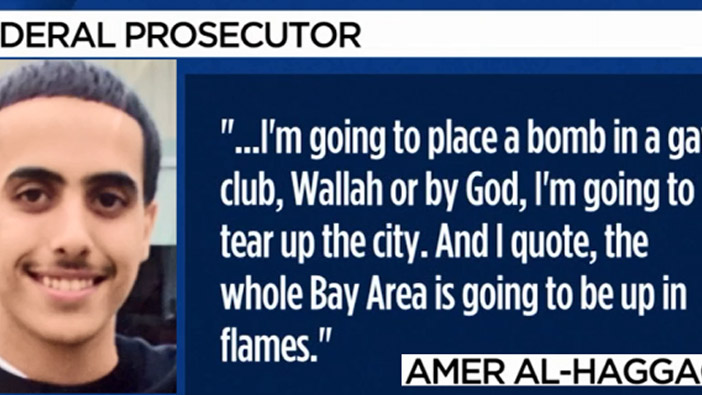 The Berkeley High School graduate, 23, had applied to join the Oakland Police Department so he could acquire weapons for his attacks. In meetings with undercover agents he pointed out targets including Tilden Regional Park in Berkeley and the UC Berkeley campus.

According to ABC News, Alhaggagi told a confidential source “I live close to San Francisco, that’s like the gay capital of the world. I’m going to handle them right, LOL. I’m going to place a bomb in a gay club, Wallah or by God, I’m going to tear up the city. The whole Bay Area is going to be up in flames.”

In 2016, Fox News reports, Alhaggagi opened several Twitter and Facebook accounts for ISIS supporters. He then allegedly told an undercover FBI agent that he wanted to kill 10,000 people in the Bay Area and brought three backpacks to be used in a future attack.

Attorney Mary McNamara told reporters her client Amer Alhaggagi was “a young guy who is immature, said some stupid things online,” and that the FBI “sent out their best people to try to get a sting operation going.” A statement from Alhaggagi’s family claimed “Amer is not a terrorist or a violent person, but a young man born and raised in California who said many foolish things on the Internet. Amer did not commit or plan a violent act.” The FBI didn’t see it that way.

Last year FBI Special Agent John Bennett told ABC News it was not online puffery but “a case of grave importance for us. This was a clear and present danger for public safety here in the Bay Area.” Alhaggagi’s goal was to kill 10,000, and as he explained “redefine terror.” He planned to start a huge fire in the Berkeley Hills but Amer Alhaggagi is not the only terrorist collaborator to target the Bay Area.

Everitt Aaron Jameson, 26, a former U.S. Marine from Modesto, California, planned to use pipe bombs to channel victims into part of Pier 39 in San Francisco so he could shoot them. CNN reported that Jameson expressed loyalty to ISIS and Abu Bakr al-Baghdadi and even offered to donate money and use the firearms skills he had learned in the Marines.

In a search of his home police found a letter by Abdallah Abu Everitt Ibn Gordon Al-Amriki, reading “you’ve allowed Donald Trump to give Al Quds away to the Jews. We have penetrated and infiltrated your disgusting country.” During the search, CNN reported, Jameson “talked about supporting ISIS and terrorism and said he would be happy if the attack were carried out.”

Jameson’s case recalls Californian Nicholas Teausant, a National Guard reject who sought to join “Allah’s army,” and fight for ISIS in Syria. The FBI arrested Teausant en route to Canada, where he had booked a flight for Syria. In California, he spoke of bombing a “Zionist” daycare center. On December 1, 2015, Teausant pleaded guilty to supporting a terrorist organization.

In June 2016 Nicholas Teausant was sentenced to 12 years in prison for supporting the Islamic State a “designated foreign terrorist organization.” Everitt Jameson is slated for sentencing on September 4 and in November Amer Sinan Alhaggagi faces a maximum of 47 years. His attorney will ask that he serve only six to seven years because, she charges, he is being “slammed by the system.”

As the case confirmed, terrorism remains a clear and present danger in the Golden State, the most populous in the nation. Terrorists target major population centers to maximize victims.

Even so, local media did not abound in statements thanking the FBI for stopping Alhaggagi before he could attack the LGBTQ community he hated.

The American-born ISIS ally targeted UC Berkeley but chancellor Carol Christ issued no official statement on the case. Neither did University of California president Janet Napolitano, a former Department of Homeland Security boss.

Oakland police announced no changes in background checks for potential recruits. Alhaggagi’s plans to torch the Berkeley Hills prompted no investigation of terrorism as the cause of major California fires.

Oakland resident Amer Sinan Alhaggagi may have been aware that in 1991 a fire in the Oakland hills killed 25 people and destroyed nearly 3500 homes. As he said, “the whole Bay Area is going to be up in flames.”