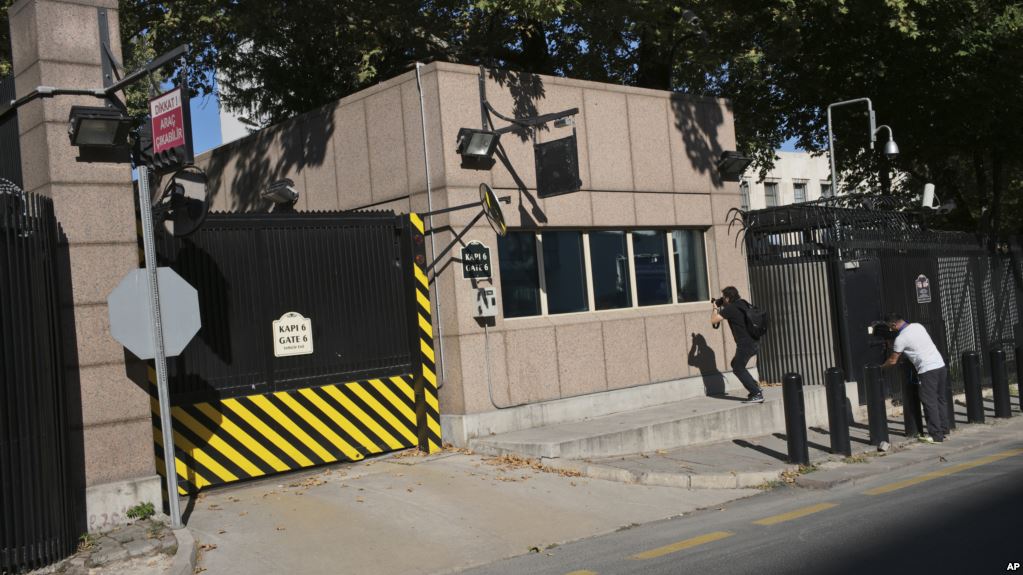 Shots were fired at a security booth outside the U.S. Embassy in Turkey’s capital early Monday, but U.S. officials said no one was hurt.

Private Ihlas news agency said four to five rounds were fired from a moving white car and targeted the booth outside Gate 6 at the embassy in Ankara. Police were searching for the car.

U.S. Embassy spokesman David Gainer thanked police for their “rapid response”‘ and said no injuries had been reported.

The U.S. mission is closed this week as Turkey celebrates the Muslim holiday of Eid al-Adha.

Ties between Ankara and Washington have been strained over the case of an imprisoned American pastor, leading the U.S. to impose sanctions, and increased tariffs sent the Turkish lira tumbling last week.

Evangelical pastor Andrew Craig Brunson — currently under house arrest after more than 1 1/2 years in prison — is facing up to 35 years in prison if convicted of trumped up espionage and terror-related charges.

The Turkish government agreed to drop terrorism charges against the pastor in exchange of the U.S. government dropping fines totaling billions of dollars against the bank. A senior White House official said the offer was rejected.

“Turkey has taken advantage of the United States for many years. They are now holding our wonderful Christian Pastor, who I must now ask to represent our Country as a great patriot hostage. We will pay nothing for the release of an innocent man, but we are cutting back on Turkey!” Trump tweeted on Thursday.

Earlier this month, Secretary of State Mike Pompeo also pressed the Turkish government, saying the sanctions on Turkish officials mean the White House is serious about the immediate release of Brunson and others.

“The Turks were on notice that the clock had run out and it was time for Pastor Brunson to be returned and I hope they’ll see this for what it is: a demonstration that we’re very serious,” he said. “Brunson needs to come home as do all the Americans being held by the Turkish government.”

“Pretty straightforward. They’ve been holding these folks for a long time. These are innocent people,” he added, referring to several other detained local employees of the U.S. diplomatic missions in the Turkey.

Last week, Trump signed a defense spending bill that includes delaying the delivery of F-35 fighter jets pending a Pentagon report. Senators have been working to block their delivery in response to Brunson’s arrest and Turkey’s pledge to buy Russian S-400 missile systems.

“I have just authorized a doubling of Tariffs on Steel and Aluminum with respect to Turkey as their currency, the Turkish Lira, slides rapidly downward against our very strong Dollar! Aluminum will now be 20% and Steel 50%,” Trump tweeted earlier this month. “Our relations with Turkey are not good at this time!”

Turkish President Recep Tayyip Erdogan has called for a boycott on U.S.-made electronic products, with some citizens heeding his call and filming themselves breaking their iPhones. Turkey has also increased imports tariffs on some products.