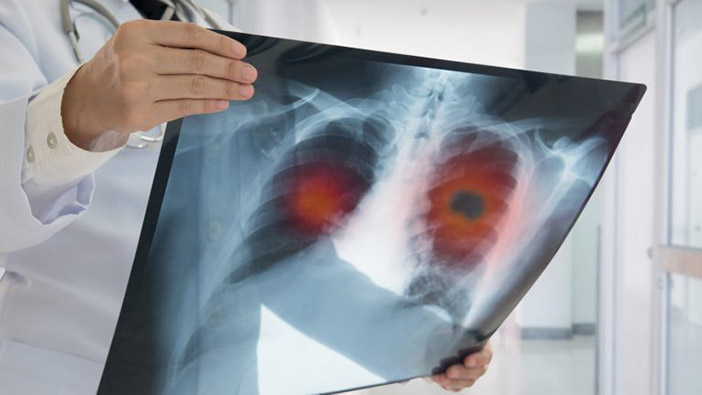 New-generation lung cancer drugs can be very effective, but within about a year the patients tend to develop resistance to the therapy.

Researchers at Israel’s Weizmann Institute of Science led a study using a new combination of existing drugs to help crush potential resistance to the treatment in mice.

Their findings were published recently in the journal Clinical Cancer Research.

The study focused on a subtype of lung cancer caused by a mutation in a gene called EGFR, responsible for about 12 percent of cases.

Patients with the EGFR mutation can be helped by kinase inhibitors, which block the mutation, preventing EGFR from generating a signal for uncontrolled division. These drugs work much better than chemotherapy, but within 10 to 14 months many patients develop a secondary mutation in the EGFR causing their tumors to reappear.

In 2015, a new kinase inhibitor, Tagrisso, was approved to block this second mutation. However, within 10 to 14 months a third mutation or other alterations emerge in the EGFR gene, causing another relapse.

“This of course is a nightmare for the patients, their families and the doctors,” said Prof. Yosef Yarden of the Weizmann Biological Regulation Department. “We’ve now developed a new approach that works in mice and may help relieve this frustrating situation if our method proves to work in humans.”

This triple combination therapy caused the mouse tumors to shrink substantially. The tumors did not regrow as long as the mice received the treatment.

“If confirmed in humans, the new combination therapy may help extend the lives of many thousands of lung cancer patients who currently develop resistance to kinase inhibitors,” Yarden said.

‘Diseases of Despair’ Skyrocket in America

Prediction Made at COVID-19 Conference: World Will Emerge from Pandemic in the Second Half of 2021

With Cold Weather Forcing Patrons Inside, How Safe Are Restaurants?