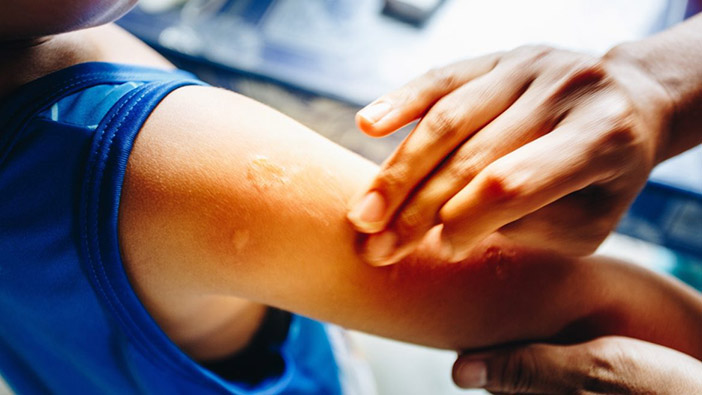 Before a sandfly bites, she doesn’t buzz like a mosquito. The beige insect swoops in silently, and only when the itching begins do you know you’ve been her victim. Usually the bite is just an uncomfortable annoyance.

However, more than 90 sandfly species are known to transmit trypanosome parasites called Leishmania. A small fraction of people infected with the parasite will develop leishmaniasis, a disease affecting people in 88 countries.

Lately, Israel is one of many areas in the Americas, the Mediterranean basin, the Middle East and Central Asia experiencing an outbreak of cutaneous leishmaniasis, the most common form of the disease, causing ulcerated skin lesions and sometimes lifelong scars and disability.

Prof. Shulamit Michaeli, vice president for research at Israel’s Bar-Ilan University, is working to commercialize a nanodrug to protect against and treat leishmaniasis and other diseases caused by trypanosomes transmitted by biting flies, such as sleeping sickness (African trypanosomiasis) and Chagas disease (American trypanosomiasis) prevalent in Latin America.

In collaboration with Prof. Jean-Paul (Moshe) Lellouche, chairman of Bar-Ilan’s chemistry department, Michaeli’s life-sciences lab in the Bar-Ilan Institute of Nanotechnology and Advanced Materials (BINA) developed a patented compound that kills the two types of Leishmania parasites found in Israel as well as the Leishmania that cause visceral leishmaniasis.

A combination of a polymer and a pharmaceutical ingredient bonded together by specially fabricated iron oxide nanoparticles, the drug takes only about 20 minutes to do its job in the lab culture.

“The nanodrug eliminates almost 95% of the parasite from the macrophages without harming the macrophages. Importantly, there were no signs of toxicity observed in the injected mice, suggesting that our preparation is nontoxic,” she tells ISRAEL21c. “There was no change in blood counts or liver enzymes.”

She notes that the treatment worked in both the insect host and the mammalian (mouse) host parasites.

The parasite begins its journey in the insect’s gut, where it stays for two to three weeks before migrating to its salivary glands. When the fly has its next meal, the parasites are transferred via the saliva to the prey, and then the mammal starts playing host to the parasite.

Once the injected nanodrug proved successful in mice, the lab then formulated it as an ointment to treat cutaneous leishmaniasis, which Michaeli says does not always respond to the commonly used Leishcutan ointment made by Teva Pharmaceuticals.

“We saw that if we administered our ointment as a preventive measure, immediately after injecting the parasite into the mouse, we were able to avoid 80% of the lesion. And we saw improvement in lesion development after the lesion was already blown up,” she reports.

Theoretically, people in high-risk areas could have this ointment on hand to apply in case of a sandfly bite, to avoid developing leishmaniasis.

“We are now negotiating with an Israeli pharma company to take over the synthesis of the drug to be used for testing infected humans,” she says.

While other effective drugs exist for leishmaniasis, some of them are not available as ointments or they are very expensive, she says. “Ours is not expensive and the fabrication is rather simple.”

Michaeli and Lellouche’s project has been supported by the Israel Innovation Authority’s KAMIN Project bridging basic and applied research, with additional funding from the New York-based Applebaum Foundation.

“Hopefully we’ll continue to get support from the IIA to build collaboration between a pharma company and Bar-Ilan to produce this drug,” she says.

Michaeli did not start out to conquer trypanosome diseases. Her lab has spent the past seven years working on a nanotech treatment for cancer. “I thought we could harness our capabilities to develop a leishmaniasis drug, and I gave it a try and it worked.”

She also invented a new fast assay to check the activity of the nano ointment. “Because of that we could screen a relatively large amount of combinations quickly and find the best one to use for animal studies. This process usually takes weeks,” she says.

Last year, her lab published its findings on the mechanism of trypanosome migration, in the peer-reviewed journal PLOS Pathogens. Another paper will soon be published about her lab’s mouse trials of the nanodrug.