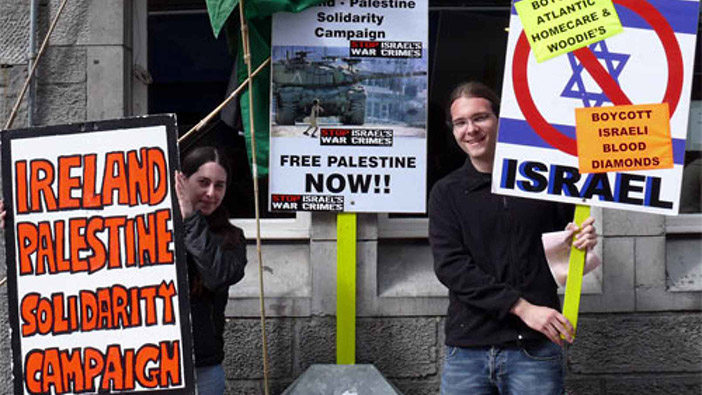 The satanic stabbing of Salman Rushdie and the dangerous Iran deal

Another EU country launches BDS attacks on the Jewish State

The Irish Senate approved a bill last month criminalizing trade of products from the so-called “occupied territories,” or more specifically from Israeli communities in Judea and Samaria. The BDS legislation was titled the “Control of Economic Activity (Occupied Territories) Bill 2018.” The bill prohibits the import and sale of goods, services, and natural resources originating in illegal settlements in the occupied territories.

In recent decades, the Republic of Ireland has become one of the leading anti-Israel within the European Union (EU). Irish politicians, journalists, and intellectuals have regularly excoriated Israel for many years. Every action undertaken by Israel has been denounced in the Irish parliament and in the media echo chamber, regardless of the context or circumstances. The parties of the hard Left are particularly hostile to Israel, demanding boycotts and the expulsion of the Israeli ambassador. The Sinn Fein party is the most vocal. It is a party that has had long ties with Hamas and other Palestinian terror groups. Neither of the governing coalition parties, the Center-Right Fine Gail and the populist Fianna Fail, have defended Israel, the only pro-Western liberal democracy in the Middle East. What is rather astonishing about this latest anti-Israel bill is its hypocrisy and double-standards that clearly border on anti-Semitism.

There are over a hundred disputed territories around the world. Judea and Samaria are disputed territories and not “occupied” or taken away from a Palestinian state. Such a state has never existed. Israel captured these historically Jewish lands in the 1967 defensive war from the Jordanians, who illegally conquered them in Israel’s 1948 War of Independence. For Ireland to pass judgment on this matter by legislating a punitive bill is not only hypocritical but an outrageous interference in an issue that should be settled between Israelis and Palestinians. Ultimately, the Bill will hurt the Palestinians who depend on Israeli employers based in Judea and Samaria for their livelihood.

With this boycott Bill, the Irish Republic singles out the Jewish state for punishment. Dublin has not approved a similar statement directed at China, which illegally occupied Tibet, denies its people self-determination, and has an atrocious human rights record. Nor has the Islamic Republic of Iran been cited for condemnation and boycott for its appalling human rights record, its execution of children, and it being a state-sponsor of global terrorism. Kashmir is occupied by India, Pakistan claims it, and it is employing terrorism against Indian troops, but no bill against products from Kashmir. A similar situation exists in Cyprus, where Turkish forces have occupied the Northern part of Cyprus. The Irish parliament did not boycott Turkey, nor legislate anti-Turkish laws.

Morocco has occupied Western Sahara and sent tens-of-thousands of settlers to Western Sahara to sway a referendum, which offered independence for the Saharawis. There are no known Irish BDS campaigns against Morocco. The Rock of Gibraltar has been in dispute between Britain and Spain for years. Spain claims the Rock as its natural territory. Britain has occupied this strategic Rock for centuries. Again, the Irish Parliament has not legislated a boycott of British products from Gibraltar. Spain administers the autonomous cities of Ceuta and Melilla, which are within Moroccan territory, yet Dublin has no anti-Spanish legislation.

Above are but a few examples of cited conflicts and disputes from just about every continent on the globe, but the Irish Senate ignores every other conflict and controversy while focusing on punishing one country only–the Jewish state of Israel. This double-standard qualifies for Nathan Sharansky’s (former Soviet dissident, and author of The Case for Democracy) 3D test to define anti-Semitism, which is Demonization, Delegitimization, and Double-Standards applied only to Israel. The authors of the Irish Senate Bill (Control of Economic Activity Bill 2018) are seeking to exploit the Bill to advance the Boycott, Divestment, and Sanctions (BDS) campaigns intended to isolate and delegitimize the Jewish state.

The people of the Republic of Ireland have traditionally relied on the influential Catholic Church as their trusted institution. In recent decades, however, the mass media has replaced the Church in formulating the public’s mindset. As a result, the people of Ireland, much like elsewhere in Western Europe, is subjected to a one-sided view, which is secular, socialist, and “progressive.” This bias has resulted in biased reporting, which legitimizes a terrorist group like Hamas and embraces the terrorist view of events while portraying the Israeli government declarations as questionable.

The Irish tendency to identify with the Palestinian narrative stems in large part from a comparison with the Irish struggle for independence against British colonialism, except that Irish acceptance of this comparison is flawed. For one thing, the Palestinian-Arabs, like the Palestinian-Jews, were given an opportunity in November 1947, to assert their self-determination by the United Nations resolution on Partition. The Palestinian-Arabs could have had a chance to establish their state then, but decided to reject the two-state solution embedded in the Partition Plan.

The Palestinian-Jews accepted the Partition Plan and spawned institutions that served it well when independence came in 1948. The Palestinian-Arabs, together with the Arab states, chose instead to annihilate the Jewish state at its birth rather than build a future for their people. They were led by Hitler’s ally Haj Amin al-Husseini, the Mufti of Jerusalem, who set out to do to the Jews of Palestine what Hitler did to the Jews of Europe–slaughter them. It is doubtful that the Irish media and the educational system have bothered to check and report on these historical facts.

Dublin has sympathized with the Irish Republican Army (IRA), the terrorist group that linked arms with the Arab and Palestinian terror groups. Both trained together in Lebanon’s Bekaa Valley camps. In Belfast’s Catholic neighborhoods, it is not uncommon to see Palestinian flags and conversely, the Star of David flags in Protestant Unionist neighborhoods.

The Irish government has supposedly opposed the Bill, not because of love or justice for Israel, but because it is legally problematic and appears to contravene EU laws prohibiting “unilateral restrictions on trade.”It also breaches the U.S. anti-boycott laws. If enacted, the Irish law would place leading U.S. companies with Irish subsidiaries in a position to choose between violating Irish law or violating the U.S. Export Administration Regulations, which requires U.S. firms to refuse to participate in foreign boycotts that the U.S. government does not sanction.

Gerald Steinberg, President of NGO Monitor pointed out in the Times of Israel that “Being anti-Israel in Ireland is increasingly a matter of political correctness across the political parties…the impact of this political correctness, and the damage that will result from the vote on the legislation is not only that Ireland will adopt a discriminatory economic boycott of Israel. Rather, as noted by Irish critics, in an already poisoned relationship which includes significant anti-Semitism, the campaign will add to the hatred, and contribute nothing to peace.” The Bill, if made into law, would demonstrate first and foremost the blatant Irish government hypocrisy.