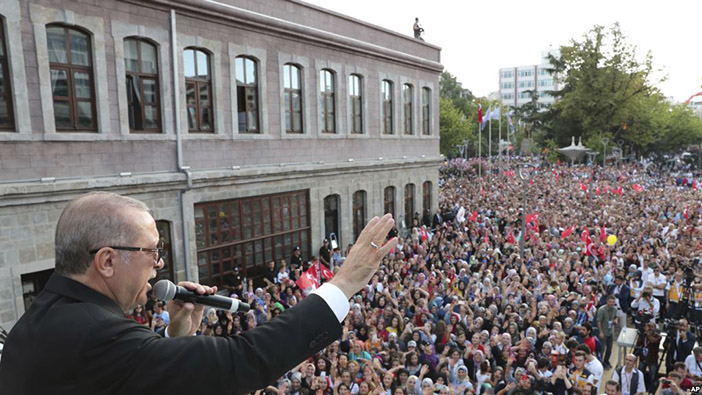 Turkish President Recep Tayyip Erdogan, embroiled in a bitter dispute with the U.S., a NATO ally, contended Sunday the plunging value of his country’s lira currency amounted to a “political plot” against Turkey.

Erdogan, speaking to political supporters in the Black Sea resort of Trabzon, said, “The aim of the operation is to make Turkey surrender in all areas, from finance to politics. We are once again facing a political, underhand plot. With God’s permission we will overcome this.”

President Donald Trump has feuded with Erdogan over several issues, including the detention of an American pastor in Turkey, whom Turkey has held since 2016 and accused of espionage. Turkey last month released the evangelical preacher from a prison, but is still detaining him under house arrest pending his trial, despite the demands of the U.S.

With the dispute intensifying, Trump on Friday doubled steel and aluminum tariffs on Turkey, sending the beleaguered lira plunging 16 percent, part of a 40 percent plummet for the currency this year. In early Asian trading Monday, the lira fell to a record low of 7.06 against the dollar.

“What is the reason for all this storm in a tea cup?” Erdogan said. “There is no economic reason for this … This is called carrying out an operation against Turkey.”

Erdogan renewed his call for Turks to sell dollars and buy lira to boost the currency, while telling business owners to not stockpile the American currency.

“I am specifically addressing our manufacturers: Do not rush to the banks to buy dollars,” he said. “Do not take a stance saying, ‘We are bankrupt, we are done, we should guarantee ourselves.’ If you do that, that would be wrong. You should know that to keep this nation standing is … also the manufacturers’ duty.”

Erdogan signaled he was not looking to offer concessions to the United States, or financial markets.

“We will give our answer, by shifting to new markets, new partnerships and new alliances,” said Erdogan, who in recent years has built closer ties with countries in Latin America, Africa and Asia. “Some close the doors and some others open new ones.”

He indicated Turkey’s relationship with Washington was imperiled.

“We can only say ‘good-bye’ to anyone who sacrifices its strategic partnership and a half century alliance with a country of 81 million for the sake of relations with terror groups,” he said. “You dare to sacrifice 81-million Turkey for a priest who is linked to terror groups?”

American pastor Andrew Brunson, if convicted, faces a jail term of 35 years. Trump has described his detention as a “total disgrace” and urged Erdogan to free him immediately.