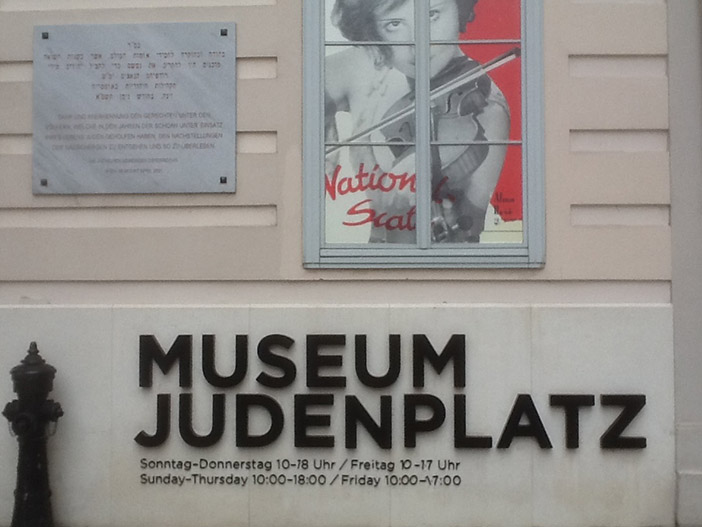 Of all the cities in Europe, Vienna has perhaps the richest and most deeply rooted Jewish heritage. Vienna’s Jewish community has remained vibrant and significant, and today Vienna’s Jewish heritage sites are some of the richest in Europe. It’s impossible to overestimate the contribution of the Jewish community on the social, cultural and political life of Vienna. In the 20th century alone, Vienna’s Jewish community included brilliant figures such as Sigmund Freud, Gustav Mahler, the writers Stefan Zweig and Arthur Schnitzler, and Theodor Herzl, the founder of the modern Zionist movement. In fact, three of the four Austrian Nobel Prize winners were Jewish. In the 1900s, Vienna was home to 175,318 Jews, comprising the third largest Jewish population in Europe after Warsaw and Budapest. Ten percent of the city’s population and 60 percent of its doctors were Jewish. Twenty-four synagogues and some 40 smaller prayer houses were completely destroyed during Kristallnacht in 1938 and afterwards. Of all these structures, only the Stadttempel built in 1826 survived.

Today, after much struggle, Jewish culture in Vienna is flourishing again. Due mostly to immigration from the East, the city’s Jewish population has slowly been growing all over the city with Leopoldstadt, one of Vienna’s more diverse neighborhoods (Second District), has the highest Jewish population. Today there are between 15,000-20,000 Jews living in Vienna, and there are 15 synagogues, along with numerous impressive sights, including the Jewish Quarter, which is in the center of the city. There are also numerous Jewish institutions, for instance the new IKG campus, the Lauder Chabad Campus, the Jewish Vocational Education Center, prayer rooms, mikvehs (ritual baths )and other religious educational institutions. But you wouldn’t know by walking past them. You may notice a guard booth or concrete barriers in front of a nondescript building that could tip you off to the presence of a Jewish day school or synagogue.

In the Second District you will also find Jewish shops, kosher supermarkets, butchers, bakers, restaurants, snack bars and, in the area around Tempelgasse, the Sephardic Center and Synagogue. The site that until 1938 contained the Leopoldstadt temple is now home to the ESRA psychosocial institution for survivors of Nazi persecution and their descendants. There is also a Jewish Institute for Adult Education at Praterstern which also gives non-Jews the opportunity to learn more about Judaism in courses on Yiddish, kosher cookery, Israeli folk dancing, Klezmer music and religious issues. As Cantor Shmuel Barzilai told NYJTG, “Jewish life in Vienna today is very colorful and lively. We have Reform and Sephardic and Chasidic Jews. There are kosher restaurants, a dozen Jewish schools, and you can get any products needed to live a Jewish life.”

Vienna’s Jewish Museum is a good place to start for both an overview of the city’s Jewish history and a taste of today’s Jewish cultural offerings. It is the site of the world’s first Jewish Museum in 1895 that was sponsored by a group of Viennese–Jewish citizens. Its first exhibition opened in 1990 in the Palais Eskeles, a downtown mansion at Dorotheergasse 11, in the heart of Vienna’s First District. Its unusual exhibition arrangement offers a unique view of Jewish history and memory. The permanent exhibitions in the Jewish Museum are distributed over three areas: the newly arranged Display Depot presents collections and the collectors behind them, such as Max Berger. The Studio is a workshop and exhibition space for ritual everyday objects. Since November 2013, the new permanent exhibition “Our City!” provides a comprehensive insight into Jewish life, the history of Jewish Vienna from the past through the present day. The journey begins on the ground floor with the years spanning 1945 to today. On the second floor of Palais Eskeles, visitors experience Jewish history from its beginnings to the years 1938-1945. A 3D animated film provides virtual access to Vienna’s synagogues that were destroyed in 1938.

The library here tops those of all other Jewish museums in Europe, preserving 25,000 volumes in German, Hebrew, Yiddish, and English. At the museum entrance you will find a bookstore stocked with catalogues and texts. On the same floor, you will find also the Teitelbaum Café, among the city’s best, which serves Austrian kosher wines, Viennese pastries, and vegetarian dishes.

The Jewish Museum also has a branch at Judenplatz, the heart of Vienna’s medieval Jewish quarter, which forms part of a complex inaugurated in 2000 that also includes a Holocaust memorial commemorating the 65,000 Austrian Jews killed in the Shoah and a Holocaust documentation center. Vienna’s flourishing medieval Jewish community was snuffed out in 1420/21 by persecutions that culminated in expulsions, murders and the torching of the synagogue on Judenplatz, with Jews inside. A 15th–century plaque in Latin on the house at Judenplatz 2 still commemorates this, reading, in part: “Thus arose in 1421 the flames of hatred throughout the city and expiated the horrible crimes of the Hebrew dogs.” The underground remains of the synagogue were discovered during excavations in the 1990s and these now form the core of the Judenplatz Jewish Museum, along with a multimedia exhibit about medieval Jewish life.

Above, at ground level, stands the Holocaust Monument, a massive cube of reinforced concrete that dominates the square called the “Nameless Library”; it was designed by the British sculptor Rachel Whiteread and takes the form of an “inside-out” library — rows of books with their spines facing inward. The text in front of the door reads “In commemoration of more than 65,000 Austrian Jews who were killed by the Nazis between 1938 and 1945.” Also engraved on the monument are the names of the camps where Austrian Jews were killed. In April 2001, a plaque outside the museum was dedicated to the righteous Gentiles who saved Jews, at great risk to themselves, during the Holocaust.

Two additional museums examine the importance of Jewish heritage to the cultural and intellectual history of the city: the Schoenberg Center and the Sigmund Freud House.

The Freud Museum is located in the apartment where Freud had his consultation rooms and also lived until National Socialism forced him to move to London in 1938. Personal memorabilia that were not moved to London are on view. An exhibition in the former practice rooms traces the life and work of the founder of psychoanalysis. Connected to the museum are a library and a modern event room in which small exhibitions are mounted. A few years ago, the Arnold Schoenberg Center was established at Palais Eskeles; it documents the life and work of this eminent modern Austrian composer. Various exhibitions are also arranged here.

Not far from the Schoenberg Center, you find the Vienna Konzerthaus; many Jewish upper-middle-class families were among its founders and patrons. If you walk along the Ring Boulevard, you will pass numerous splendid mansions, many of which were once owned by Jewish families – Palais Todesco near the Vienna State Opera, Palais Schey, Palais Epstein, and Palais Ephrussi, to name but a few.

A center of knowledge and information about all aspects of Jewish life and cultural heritage in Vienna, The Jewish Welcome Service Center is an excellent place to get acquainted with the most important Jewish areas in the city. It’s also where you can learn about any cultural events taking place during your stay.

I learned from Ms. Beatrice Auymar, my guide, about a program to place memory stones on houses and embedded in sidewalks in front of homes where Jews once resided. In this spirit is the setting of the “Stones of Remembrance” in an effort to keep alive the memory of these murdered Jewish inhabitants who lived here before the Holocaust. Their culture and tradition was an important part of Viennese life and their huge impact is still visible today. It is also to raise the consciousness of those that walk past the stones by making them reflect on this period of Viennese history.

Situated in a park in Morzinplatz is a memorial that pays tribute to the victims of the Nazi tyranny in Vienna and elsewhere during World War II with a bronze sculpture and a block of granite from Mauthausen that symbolizes the fate of the victims. The text reads: “Here stood the House of the Gestapo. To those who believed in Austria it was hell. To many it was the gates to death. It sank into ruins just like the ‘Thousand Year Reich.’ But Austria was resurrected and with her our dead, the immortal victims.”

The Main Synagogue: The Stadttempel

It is the only synagogue to survive World War II and is today Vienna’s main synagogue. Located in the former Jewish quarter on the sloping Seitenstettengasse, it is also known as the Seitenstettengasse Temple. You might be surprised that it doesn’t have a grand entrance. That’s because it was erected in 1824 at a time when Emperor Franz Josef demanded that all non-Roman Catholic places of worship be clandestine from street view. It is housed between two apartment buildings and lacks a grand façade, and was the only one of 94 Viennese synagogues saved from Nazi destruction.

This beautiful synagogue was designed by the architect Josef Kornhäusl, who was highly respected in his time. A specialist in theaters, he created this small theater or Italian-style Baroque opera house with a circular shape, a stage, three balconies, wings, and a foyer. What I most love about this synagogue is the ceiling — painted a sky blue and evoking an ethereal, sublime atmosphere. A gilded sunburst surmounts tablets of the Ten Commandments above the ark.

The building complex houses not only the synagogue, but also the offices of the Vienna Jewish Community, the Vienna Chief Rabbi, the editorial offices of the official community newspaper Die Gemeinde (The Community), the Jewish community center that stages various events, the Library of the Jewish Museum and a kosher restaurant called Alef-Alef. What sets the synagogue apart these days are the armed guards outside. Be sure to bring your passport for entry (Monday-Thursday, 11:30 a.m. and 2 p.m.) to pass through tight security to enter the magnificent sanctuary.

For a deeper understanding of the former Jewish quarter, you need only stroll through Leopoldstadt, Vienna’s Second District, across the Danube Canal from the inner city. Before World War II about 60,000 Jews — one-third of Vienna’s Jewish population — lived here, and the district was home to so many synagogues, Jewish theaters, schools and other Jewish institutions, that it was so-called Mazzes-Insel (“The Matzo Island”). This was also the Central European stronghold of Zionism and Chasidism. Most of these sites no longer exist, but you will find plaques along these streets and Stolpersteine, or commemorative stumbling blocks, such as the ruins of one of the synagogues destroyed during Kristallnacht, where only the four columns remain. In its place is ESRA, a center dedicated to counseling the victims and witnesses of the Shoah and racism. At number 7 on the same street sits the Sephardic Center, which brings together associations of Jews from Bukhara, Georgia, and their respective synagogues.

By: Meyer Harroch
(To be Continued Next Week)

Enjoy A Picturesque Fall 2020 – Staycation at the Southampton Inn